How to test WakeOnLan with a direct ethernet connection Computer A <-> Computer B?

I'm trying to make WOL work between 2 computers in the same local network, but it currently does not work.

In order to debug the situation and avoid potential problems with the router discarding the WOL "magic packets", I'd like to temporarily test a direct ethernet cable connection between:

Since Computer B is off, it has no IP. (Even adding DHCPd server on Computer A wouldn't change anything about this). 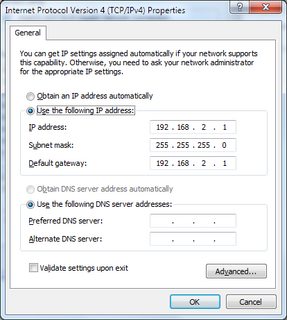 I then tried this on Computer A but it doesn't work: 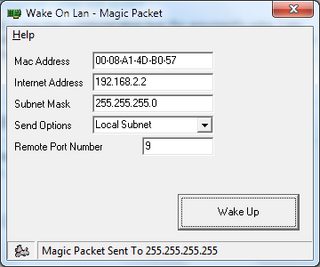 1) Since Computer B is off, it has no IP, which IP should I fill in Computer A's "WakeOnLan Magic Packet" tool?

2) More generally, how to make WakeOnLan work with a direct ethernet cable connection (without any router; as said previously I want to do this to debug WOL)?

The problem came from my motherboard (defective onboard LAN) + PCI Ethernet card.

The conclusion can be found in Is it normal that the LEDs of the network adapter are off when the computer is off and you want to power it with WakeOnLan?.

Not the answer you're looking for? Browse other questions tagged windows-7 networking ethernet wake-on-lan or ask your own question.

0
Is it normal that the LEDs of the network adapter are off when the computer is off and you want to power it with WakeOnLan?

6
Using “route add” to tell my computer to use a direct ethernet connection instead of wifi?
5
WOL doesn't work when shutdown
4
Wake on Lan works from LAN but not WAN
3
Ethernet connection shows unidentified network with no internet access
9
How to send a magic packet from linux to Windows
0
Wake on LAN in Asus M5A97 doesn't work
0
Wake On LAN timing out when computer left off overnight
0
Is it normal that the LEDs of the network adapter are off when the computer is off and you want to power it with WakeOnLan?
0
Solution for a temporary direct ethernet cable connection between Linux home server and Windows laptop