I was installing CoDeSys. I downloaded the installer executable file, which seems to be a MSI installer. Followed the steps in the installer window, and at the very last step a progress bar is shown. The bar got filled to the end, and remained full. The installer remained in this state for an hour with the progress at 100%.

There was no message shown or something else like the installer wizard that closes. I waited and then opened the installed program CoDeSys, and it worked all as it should be.

Then I closed the installer window and confirmed to stop. This was stupid because the wizard started to rollback all changes and started to remove the application...

Now when I retry running the installer wizard, it says the folder CODESYS 3.5.15.20 in Program Files should be empty. But it isn't. It still contains some remnants of the previous installation that was undone. I don't see CoDeSys in my list of installed programs, so I cannot remove it from there since it is actually already removed as I said. When I just go to my program files folder, and manually remove the CODESYS 3.5.15.20 folder from there, I always get a message saying the folder can not be removed/changed because I need permission from SYSTEM.

You could try using cmd as administrator.

One option to attempt a removal or rename of a file or directory is to use the Pending File Rename Operating (PFRO) functionality of Windows. This will perform the action:

To do so, you can manually create or update the REG_MULTI_SZ PendingFileRenameOperations registry value under the registry key HKLM\System\CurrentControlSet\Control\Session Manager to be read by the Windows Session Manager (SMSS.exe) at start-up. The easiest way is to use a tool to create or append to the value if it already exists.

As an example, to remove the folder C:\testdelete on the next system restart, run in an elevated prompt: movefile.exe "C:\testdelete" ""

The above command will create or append to, the REG_MULTI_SZ PendingFileRenameOperations registry value under HKLM\SYSTEM\CurrentControlSet\Control\Session Manager as shown below: 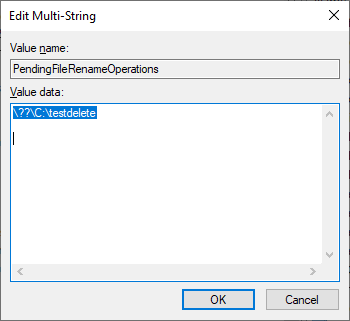 Note: The entries in the value are processed in pairs such that a blank line following an item will instruct the SMSS.exe process to delete the previous item. If the proceeding line has a path then it will be renamed.

If there are issues removing the directory or any of the operations carried out, they will be logged to C:\windows\pfro.log

Not the answer you're looking for? Browse other questions tagged windows installation permissions uninstall privileges or ask your own question.