How to convert a laptop hard drive into an external one? [closed]

I lost my laptop to a tragic coffee accident. I think that the motherboard is cooked, but many things like RAM and the hard drive will still work.

I've read that there are special adapters for hard drives, that make it possible to connect the hard drive with USB. I just want to know what kind of adapter I should buy and how to figure out the "size". I believe that laptop hard drives come in different shapes and sizes, so there can't be a single adapter that makes an USB connection for every hard drive possible. Is there a type system that describes the compatibility of the adapter with the hard drive? How does this work?

Here is an example adapter

...so there can't be a single adapter that makes an USB connection for every hard drive possible.

The relative position of the SATA power and SATA data connections on hard drives conforms to a strict design standard, allowing drives to be swapped freely between devices and adapters.

A modern laptop drive will have either an SSD or a smaller 2.5" HDD. Either way, it will have a SATA connection and a SATA power connection, the same distance apart from each other.

This SATA-to-USB adapter will work for you: 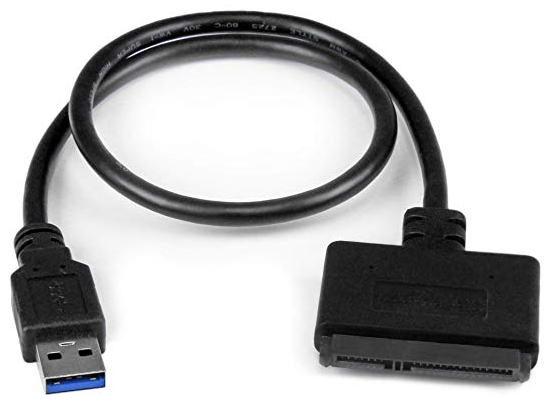 The only time you would need to think about a different adapter would be for a 3.5" desktop HDD, which would require more power in order to spin up its platters. The adapters that work for those larger, more power-hungry drives have an AC power adapter, so they don't need to rely on the USB port alone for power.

You could get away with using a cheaper adapter in this case as laptops never have the larger 3.5" HDDs in them.

I believe that laptop harddrives come in different shapes and sizes, so there can't be a single adapter that makes an USB connection for every hard drive possible.

They actually don't. Most laptops from the last ~10 years – if they have a harddrive at all – use a completely standard 2.5-inch harddrive with a SATA connector, the same as with 2.5-inch SATA SSDs and even 3.5-inch "desktop" HDDs.

So if that adapter looks like it will fit your disk's ports, then it will fit. (Although you should look for "enclosure" adapters which actually come with a box for the disk. The one you found is meant more for temporary connections, and SATA connectors on HDDs are fragile – it'll break the first time you accidentally sit down on it.)

The only issue is with very old laptops which use IDE harddrives (the ones with a wide, 40 pin connector), as the laptops often had various different connectors for those. Nowadays it'll be difficult to find a USB adapter for these at all.

Not the answer you're looking for? Browse other questions tagged hard-drive laptop external-hard-drive or ask your own question.