What causes Microsoft Outlook rule to be client-side only?

I have created four different mail rules in Microsoft Outlook (offline version of Office 365). All four are very simple -- "catch" e-mail address of some pattern and move it to specified folder.

When creating fifth rule, at the end of rule creation process I saw following message:

What parameter or condition in rule decides about this? The only difference between this, fifth rule and four created previously is that it also marks message as read prior to moving to other folder.

Could this be an issue?

This is quite very frustrating for me, because this rule is used to move hundred of e-mails per day (works actually each and every minutes), but for some reason it does this one-by-one. So, when I open up this local copy on Monday morning, I have it "blocked" for 15-20 minutes, when this rule is moving 1000+ e-mails to destination folder.

All other rules moves e-mails corresponding to them instantly. I don't actually see them in work -- all e-mails just lands in destination folder. While fifth rule works 1-2 e-mails per second at most and I can clearly see e-mails landing in Inbox and then being moved from there to the destination... slowly.

Client-only rules have at least one condition or action that uses an Outlook feature:

I can clearly see and confirm that adding and mark it as read flag to any rule causes my Outlook to start treating given rule as client-only: 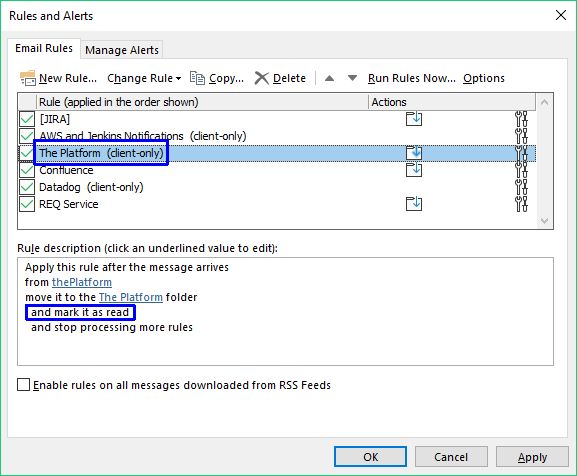 While removing this flag causes that particular rule will be effective also in Outlook Web Access (at least that's I assume from these warnings): 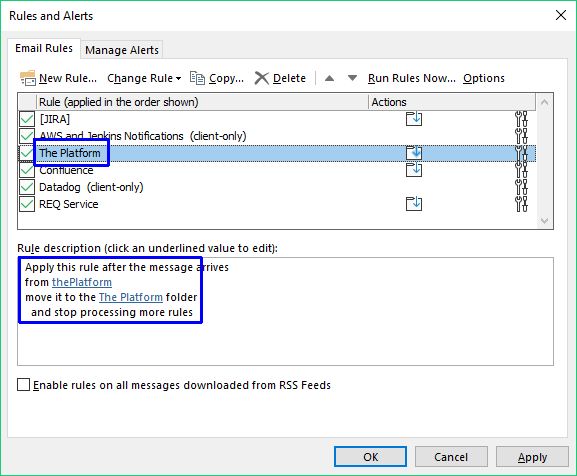 So this is the ultimate answer to my question: Forcing any rule to mark any message as read causes that rule to work only, if offline Outlook program is opened.

However I completely don't know, why is this happening like that? Why simple operation of marking message as read can't be processed in Outlook Web Access. Must be a weird part of the a matter deeply in Outlook.

Not the answer you're looking for? Browse other questions tagged email microsoft-outlook office365 email-filter or ask your own question.

2
Outlook 2007 client-only rule
0
Exchange hosted Office 365 - when a signature is setup in the OWA - should Outlook desktop pick up this sig?
3
Emails sent from Thunderbird not Showing up in Office365 OWA
8
Create Outlook rule which runs AFTER move mail to specific folder
2
Outlook Rule Not Working Correctly
0
Outlook - convert server-side rules to be client-only
1
Outlook 2016 mail rule not triggering for condition “from people or public group” for any value except myself
2
Rules mismatch between Outlook and Exchange
0
Which criteria to set when creating a rule in Outlook 365 to move all signed or encrypted emails from the Inbox folder to another folder