I built a new PC, installed 64-bit Windows 10 Pro, applied updates, and copied a bunch of my media from my old 64-bit Windows 7 PC. Most of the media does not play on the new machine.

The Movies & TV failure message is:

Choose something else to play. This item is in a format we don't support.

In the video cases, the first couple frames of the video appears before the failure message in WMP or M&TV.

Windows Media Player (Help > About > Technical Support Info) shows that it has the necessary codecs (or, at least, decoders) available for most of these media types. Including:

(By the way, the list of codecs is virtually identical to my Windows 7 PC, which plays all of these files just fine, using the same version of WMP.)

This is consistent with Microsoft documentation, which says,

By default, the Windows operating system and the Player include a number of the most popular codecs, such as Windows Media Audio, Windows Media Video, and MP3.

I would believe the suggestion that I need a codec pack if the problem didn't include MP3, MP4, and WMV files.

I've found somewhat similar reports on the web, but none of them exactly match these symptoms, and many of them seem to be related to upgrading an older version of Windows to Windows 10 (or upgrading WMP to 11 or 12).

I'm surprised the media experience can be this broken right out of the box. I'd be less surprised if this were an update from an older version of Windows and/or WMP.

Update 2019-12-16: I'm still investigating, but it seems there is no problem with the stock Windows codecs. I wrote a program that uses MFCreateSourceReaderFromURL, and it has no problem finding the MP3 decoder and reading all the samples. Using SysInternals ProcessMonitor, it seems the problem occurs in trying to set up the speakers as a media sink. Interestingly, 32-bit programs that rely on PlaySound to play vanilla PCM Wave files are silent while their 64-bit counterparts work just fine. This all points to a configuration or driver problem for the motherboard's audio, which seems far more plausible than an issue accessing the stock decoders.

This is happening due to missing codecs on your newly-installed Windows system and is perfectly normal. Windows doesn't include many of the media codecs that are required to play common media file types.

I produce media, and I'd like to be able to check that it works in the stock players so that my clients don't have to install other applications.

This is understandable. VLC is a popular choice because it includes all of the common media codecs that you might need; however, if you want to solve this problem without installing an additional media player like VLC, I recommend installing K-Lite Codec Pack Basic.

I switched from using this codec pack to VLC due to VLC's excellent handling of subtitles in MKV files but, if it weren't for that, I would still be using Windows Media Player + the K-Lite Codec Pack.

The basic variant contains everything you need to play all the common video file formats. Such as AVI, MKV, MP4, OGM, and FLV. This pack is for those who like a small no-nonsense pack. It is small, but powerful.

This will solve your problem instantly and is a good choice for minimalists who want only the codecs without additional software.

This had nothing to do with the codecs for MP3, WMV, etc., but rather with the applications successfully connecting to the "audio endpoint" (i.e., the speaker output).

In the properties for the Speakers, I disabled the "Enable audio enhancements" checkbox, and everything started working. 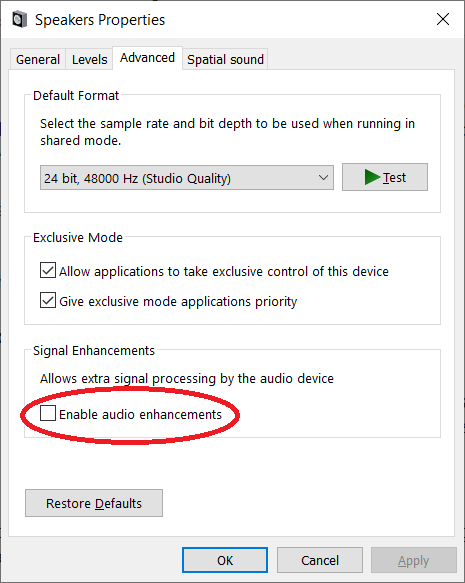 This suggests to me that there's something wrong with the drivers for the motherboard's built-in audio. I'll search for updated ones tomorrow.

Not the answer you're looking for? Browse other questions tagged windows-10 audio video windows-media-player or ask your own question.