For the next few months, I'm going to be zeroing out a lot of disks. I managed to get hold of a Host Bus Adapter (i.e. a PCIe to SATA expansion card) to give me an extra SATA controller in my tiny mid-tower, but there's no longer space in the tower itself to mount a drive, and even if there was, the temporary nature of the wiping means that there wouldn't be any point in doing so.

Whenever wiping a drive, I mount it on my desk and connect the SATA cables from my open tower to it. This works fine except for one problem - it puts some strain on the right-angled SATA power cable connected to the drive: 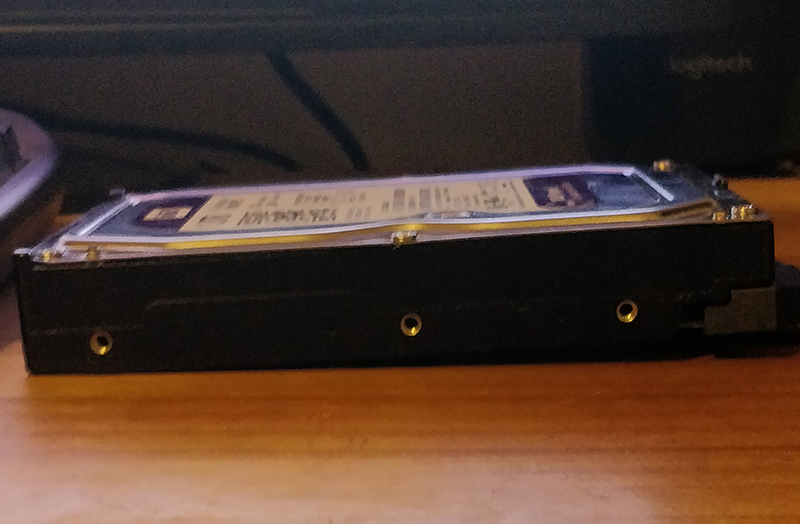 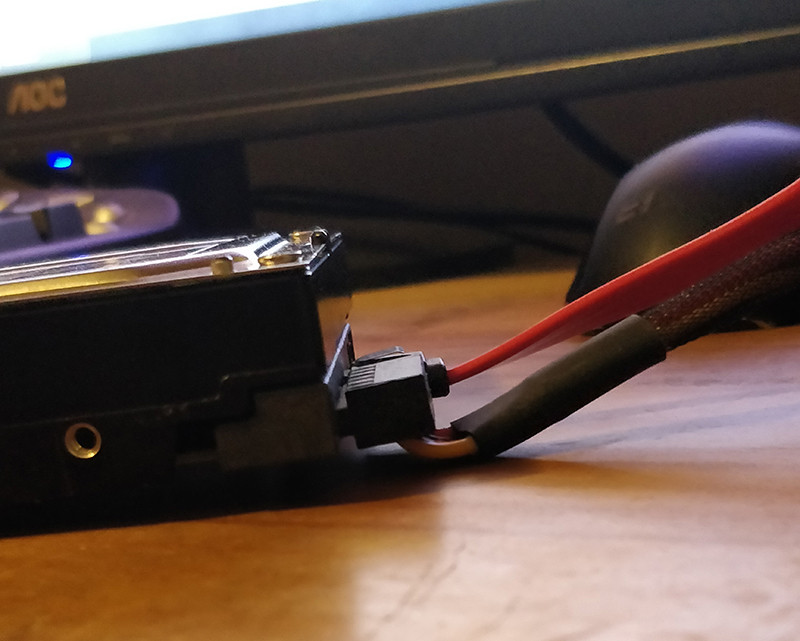 My worry is that after so long of being in this position the cable will start to wear or otherwise get damaged, so I want to balance the drive out and make it sit straighter on the desk. I did some experimenting and realised putting a flash drive underneath the disk balances it out nicely, but this still isn't ideal because: a) it doesn't prevent the drive slipping on the desk's surface, b) it might damage the flash drive, and c) I need my flash drive.

Is there anywhere I can maybe get a piece of rubber that's about the same size as a Kingston DataTraveller 100 G3? Or is there a less low-tech solution for something like this - some sort of external case that allows for the drive to be more comfortably mounted? Open to any solutions that work at this point, low-tech or not.

N.B. Any significant hardware upgrades are currently out of the question for income reasons.

You can't get much lower tech or lower cost than a bookend type of support for the drive. The hard drive does not need to be positioned flat as you have in the photos. If you place it on edge and have a bracket for that purpose, the cables will have less strain. 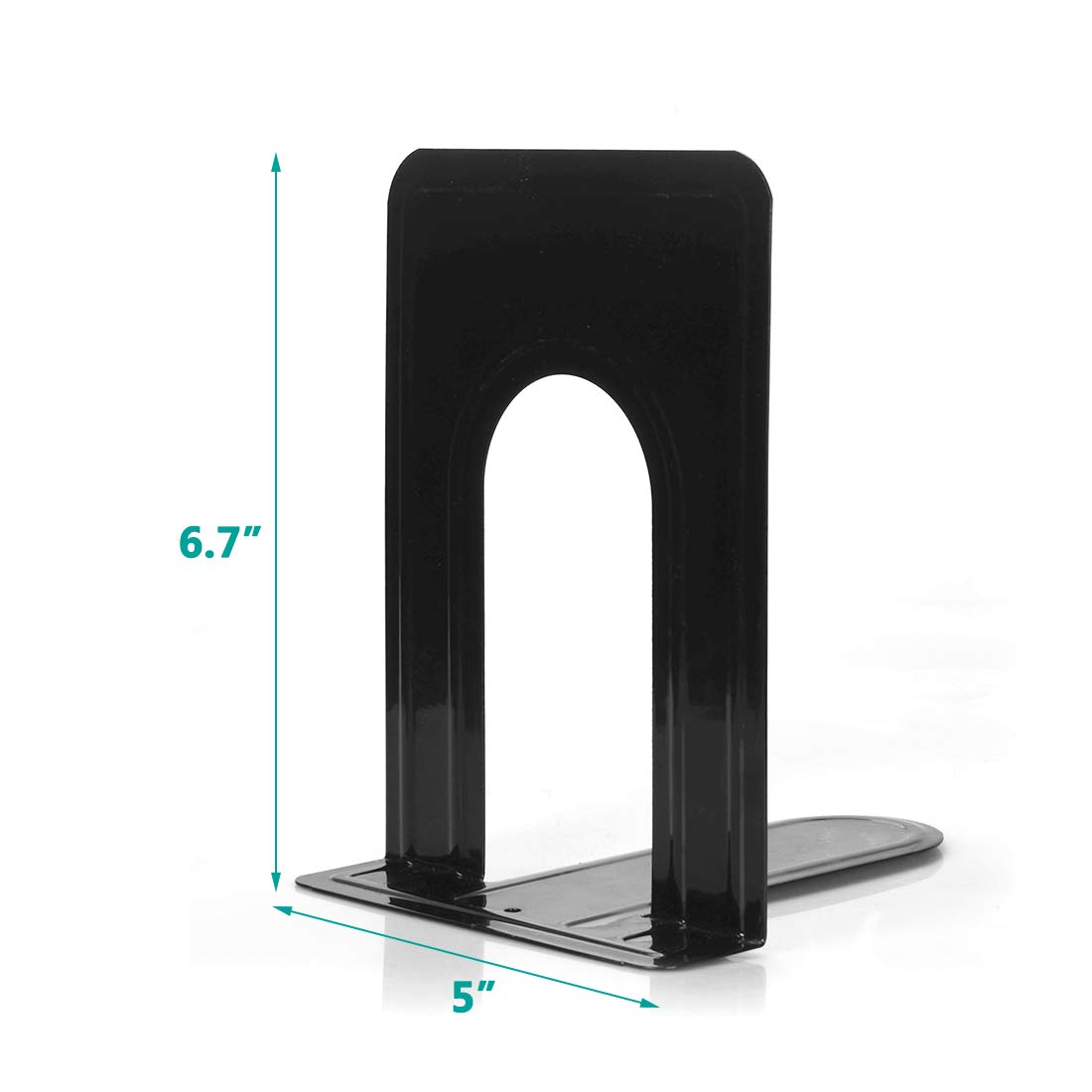 Amazon also carries a bit ornate model which would work just as well and provide a bit of novelty: 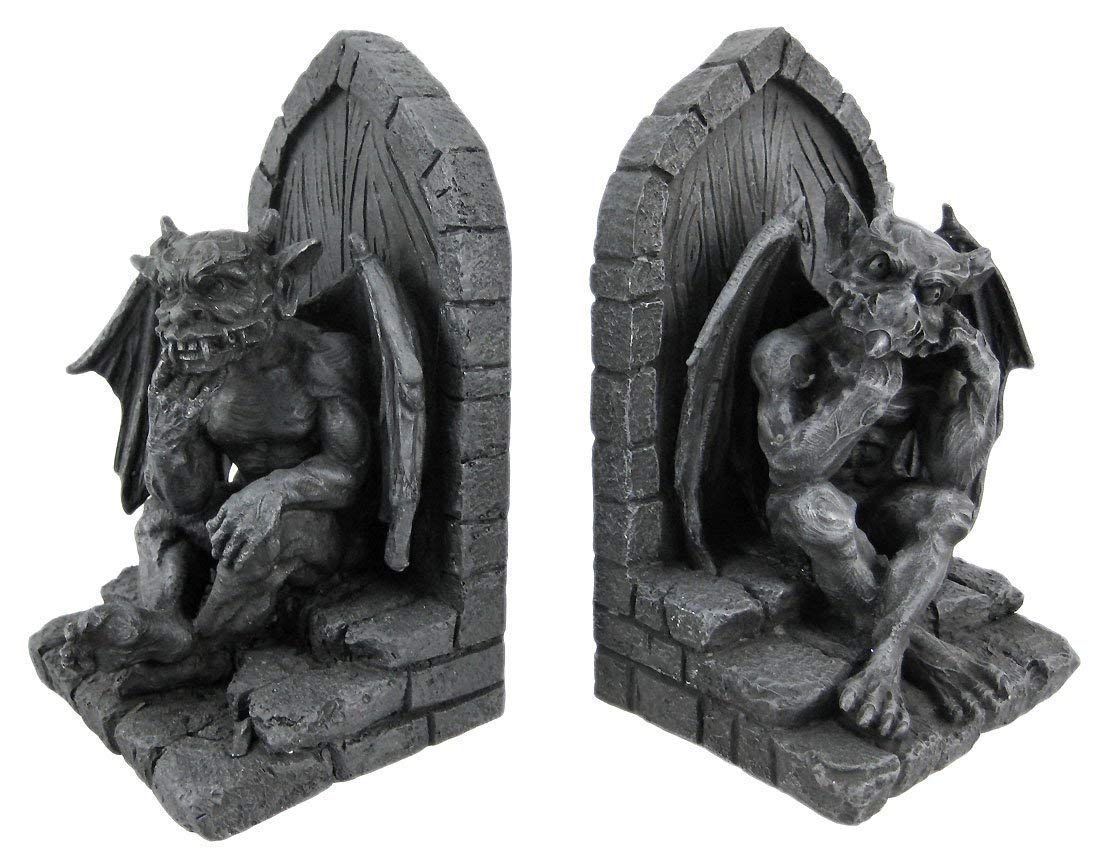 Additionally and horizontally, a larger-than-hard-drive block of wood with a groove or similar channel cut into it for cable relief will also suffice. It doesn't have to be wood. A book into which you slice out the cover and a number of pages would provide the same results.

For sliding protection, rubber tape or similar non-slip feet such as those found for bathtubs could be added to the undersurface.

I have access to a 3D printer and a laser cutter and could slap out a custom design, but a block of wood or similar is far simpler.

Computers and many appliances are shipped in a relatively solid foam cradle (not expanded polystyrene, often called Styrofoam®) which often has channels and gaps and would need only non-slip feet.

This is contrary to your request, but my external drive caddy resembles a toaster with two slots. The cabling is semi-permanent, as is the power supply, but the slots hold either laptop drive or desktop drive formats simply by gently pressing them in place and powering up.

Simply placing a HDD on the desktop is not *"mounting". One jolt, and it will slide across the desk.

Placing a HDD on a hard surface is a bad idea. Any vibration and/or shock can be easily transmitted to the drive.

I use a HDD holder made from aluminum angles and plywood with isolation mounts: 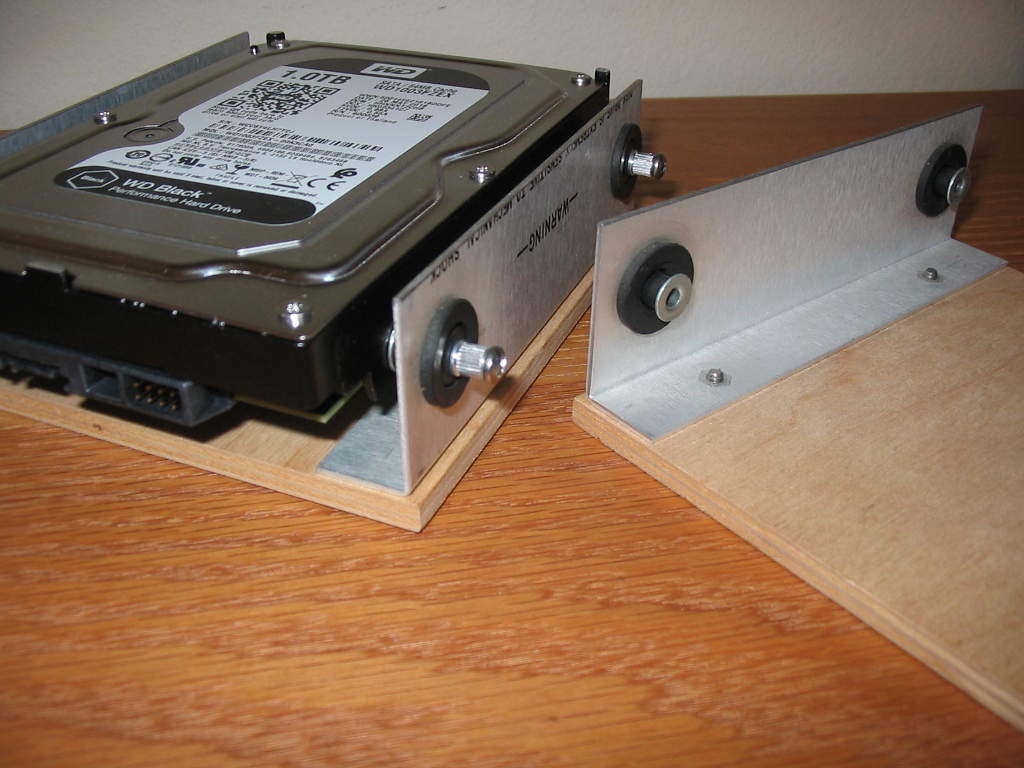 The suspended drive also allows air circulation, which used to be a requirement that was specified in manuals for 5.25" HDDs.

If we are worried about the wear on the connector from the desk, we can set the hard drive upside down. For dust concerns, a simple piece of paper placed over the bottom sides could do the trick.

Lastly if we are willing to spend a few bucks, you can purchase a SATA power extension cable that doesn't have a right-angle.

Not the answer you're looking for? Browse other questions tagged hard-drive sata or ask your own question.

24
How do PCIe to SATA expansion cards work, and does my PC support them?
0
Why do disk errors appear in dmesg output even though fsck has not been run?
0
EIDE/SATA adapter issue

0
SATA Hard Drive problems
19
6Gb/s SATA hard drive with 3Gb/s SATA port?
0
Sata Hard Drive Spins then stops
0
USB flash drive doesn't appear in any OS
0
Can you point me to a cable that will connect this motherboard port with this DVD drive?
2
How to replace hard drive and switch drive cable in a Dell Mini 12
0
How to connect SATA hard disks further away than 1 meter?