I have the weirdest of issues with Firefox (71.0) that I can't figure out: Every second time I start Firefox, it runs in a kind-of-fullscreen mode; when in that mode, pressing F11 doesn't return me to the normal, windowed mode; I do see the tabs then, but Firefox is maximized, and when I try to un-maximize it (by clicking the according button left of the close X on the upper right window corner), it goes into a windowed-fullscreen-mode - i.e. Firefox is shown as a smaller window, but I don't see the tabs.

When I close Firefox, and then start it again, it behaves normally again - until I close it and start it once more - i.e. it alternates between some weird automatic full-screen behavior and the normal one! I looked around as best as I could but haven't seen any such reports. Anybody know where I could start looking to debug this? Deleting my profile probably ;)?

Some more experiments reveal that this behavior is not depending on the addons (also happens when all addons are deactivated), but is depending on the profile - with a second profile, this does not happen (and starting Firefox with the second profile does not influence the alternating behavior at all; only starts with that specific user profile have an influence on the alternation behavior.

Long story short, simple answer is probably not to really fix this in Firefox (where it probably is some kind of weird bug), but instead make do with a new profile...

You should try creating a new profile to see if the problem persists.

Be aware of installing unverified addons. 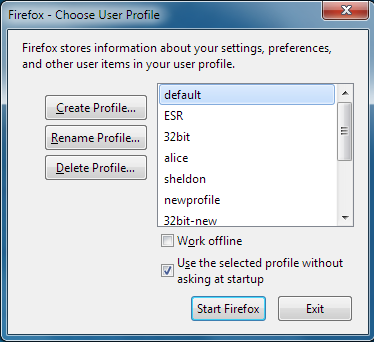 1
Close window with CMD+W with Firefox on OS X
1
Firefox 44 will not start on my Windows 7
1
Right click menu does not display in Firefox
3
Firefox doesn't respect cookie policy for google
4
Freshly installed Firefox unusable after Windows 10 reboot. Renaming the exe and rebooting “solves” the issue
3
Firefox Quantum (>=57) How to toggle all toolbars? (with a keyboard shortcut, like F11 but in a window, not fullscreen)
1
Firefox Nightly does not start due to my mistake
1
Debian: How do I stop Firefox from lagging if on battery power?
0
Programmatically close all tabs in Firefox Quantum