I try to rescue some data from my drive (with an NTFS partition), which out of sudden stopped working. Under Windows it doesn't mount properly into the system, causing a lot of hang-ups. I managed to mount it under tinycore Linux and was able to successfully list some of its directories. Listing some other directories caused I/O errors. So I decided to try ddrescue to rescue some data or at least the partition table, to see the filenames. Currently, I call it using the command ddrescue -a 100M /dev/sde seagate_disk.img seagate_disk.ddrlog. In the beginning, it looked kind of promising, with several days estimated execution time. But now it works very slow and I don't know if there is any parameter I can set to improve the runtime. I would accept a loss of accuracy.

And here's how the mapfile looks like in ddrescueview: 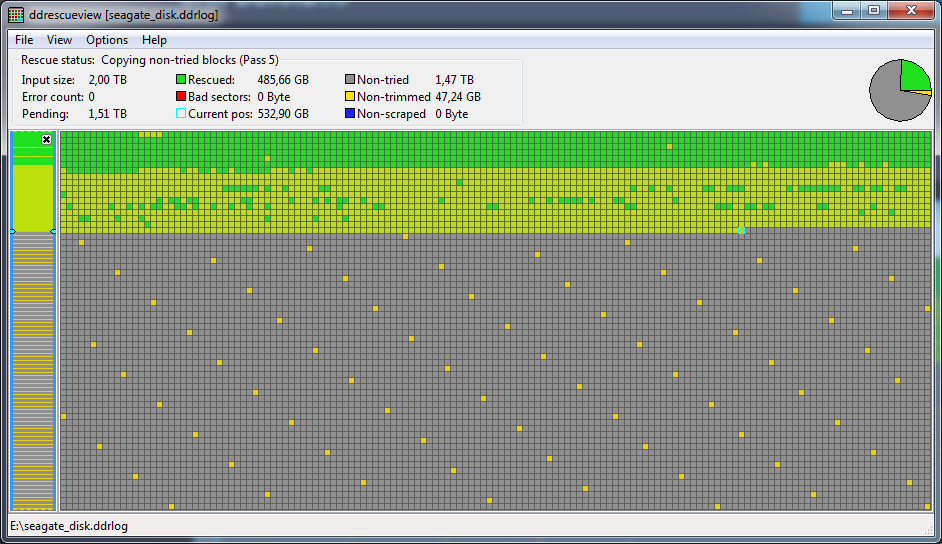 try ntfsclone with the --rescue parameter instead, it will ignore the empty parts of the volume. so any deleted files containing errors will be skipped.

Not the answer you're looking for? Browse other questions tagged ddrescue or ask your own question.

27
Is there any way to speed up ddrescue?
2
ddrescue stuck on scraping bad blocks… (forwards)
2
DDRescue - Did I do the wrong command which is causing it to take longer then expected
0
ddrescue really slow on failing drive