Windows 7 is shutting down unexpectedly, according to the logs

Here's a message from my eventvwr EventLog (Windows Logs > System):

This is funny because I was wondering why the system shut down while I was playing Civilizations IV full screen. Now I know. It was unexpected.

Has anyone encountered and resolved this?

I am running Windows 7 RC inside VMWare Fusion 2 (just updated a few months back) on a MacBook (Bitterly not Pro) aluminum-body. Windows 7 occasionally will shut down. This isn't a quick turn-off, it's a shutdown where all the programs are exited, the system waits until they quit (and Civ4 doesn't prompt me to save), it even installed Windows Updates before restarting. And yes it is restarting right after the shutdown. Because I run a game in full screen mode I do not notice any dialog with a countdown timer or anything like that that might be a warning.

As I have iStat on my dashboard widgets I can see about 8 temperature monitors. I have seen the CPU get up to 74C before, but during the shutdown, though it seemed hot to the touch (always is), it read 61C for the CPU, 60C for heatsink A, 50C for heatsink B and in the 30s-40s for the enclosure and harddrives. As I type this now, the temps are actually higher, so I don't think the temperature caused it.

I have at least six such events dating first from 5/17 which was a week after installing Windows 7.

I did find one information level warning from USER32 in the system log that says:

And another 15 minutes before that from Windows Update:

Which I think kind of explains it. Though I don't know why restarting after an update would create an error event of "shutdown was unexpected", isn't that pretty odd?

Now, how do I set it to never restart after an update unless I click something.

As fretje reminded me, there's a couple of configurable settings for this, in windows 7 they're much in the same place as in Windows 2000 SP3 and XP SP1. Running gpedit.msc pops up a window that looks like: 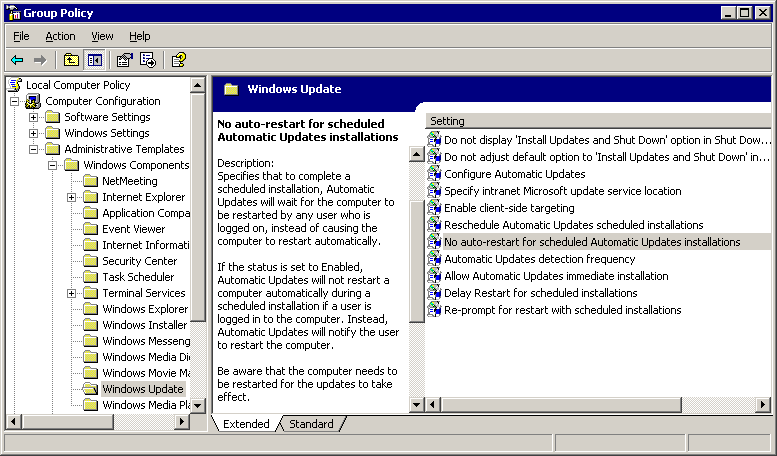 Windows 7 has changed the order and added a couple of newer options I've italicized:

Personally I chose to enable 9, 11, 12, and 13. 9 enables only those updates that do not have to restart Windows nor stop a service. Enabling 11 actually disables the auto-restart. 12 and 13 were enabled and set to their max values with the scroll wheel. 16 sounds good but won't affect users lacking their own update server.

It's been pointed out that Home editions of Windows don't come with gpedit.msc, and you must therefore set things directly in the registry. There's probably more settings you could add besides NoAutoRebootWithLoggedOnUsers ... In fact I'm going to check that now. Okay in HKEY_LOCAL_MACHINE\SOFTWARE\Policies\Microsoft\Windows\WindowsUpdate\AU add:

Jeff actually blogged about this.

It's for Windows XP but I suppose this still works for Windows 7. It basically comes down to flipping a switch in the Local Group Policy Editor (gpedit.msc).

If you are using the Home versions of Windows, you won't have the Group Policy Editor, but you can disable it using a registry hack.

And if you don't want to manually hack the registry, I've got a downloadable version for you:

Not the answer you're looking for? Browse other questions tagged windows-7 windows-update shutdown timer or ask your own question.

24
How can I stop windows from rebooting after an automatic update?
7
Change update restart prompt time in Windows XP
2
Windows 7 PC is automatically shutting down

21
How to shut down the computer without the update on Windows 7?
2
Windows 7 PC is automatically shutting down
3
Windows 8 Not Shutting Down Properly
5
Windows 8 Not Shutting Down Properly With Fast Start-Up Enabled
12
How to get "Update and Shutdown" instead of "Update and Restart" on Windows 8
1
Computer crashes when shutting down
7
Make windows 8 install updates when shutting down without disabling fast boot
66
With Windows 10 how can I shut down without installing updates?
9
Why does Windows 10 "Update and shut down" not complete the update?