It all started 5 days ago, when my sony vaio vpceb44en was working fine, but suddenly a BsoD occured, which is now more frequent. It shows a "Video TDR failure" and names atkmpag.sys in the last. The PC then restarts.

This again happens, mostly when it takes much processing (when the exhaust fan starts spinning like hell).

Also, the battery of laptop is dead, it was working on AC for almost 6 months, and because power cuts are not frequent here, I haven't thought of purchasing a battery. Although it is made to run for x64, I'm using x86, as it came with windows 7 x86 from the shop.

I upgraded to Win10 x86 because of those bsod's in hope to fix the problem, as I thought Win10 will install the compatible driver, but it's again happening. The driver is up yo date ( as it shows), but the bsods are still frequent. Also, after some bsod's, the laptop freezes, I mean not even the Vaio logo comes on restart, then I turn it off ( by pressing power button for 5 secs), and leave it for 15-20 mins, and then it boots as normal.

I don't know what is causing this, I've read the related post on SuperUser, but nothing came off, also, this issue is a little bit different. The problem mostly comes when using Google Chrome, but sometimes it happen when the laptop is idle too!

Also, the laptop is connected to an external monitor through VGA, as the screen's broken.

Thanks, I've tried to make everything clear, but you can ask if u need some details, and please help me, have given almost 5 full days in researching for this problem. 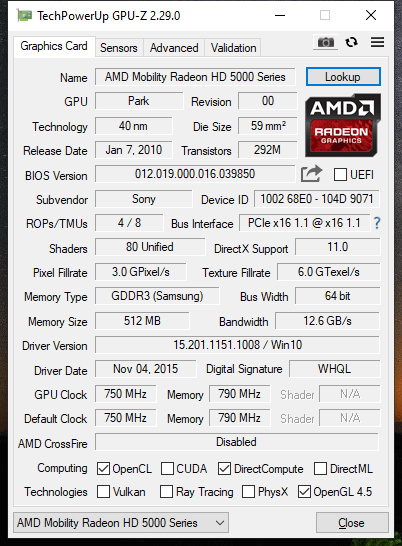 In case you need details of driver, I'm attaching a screenshot of that too- 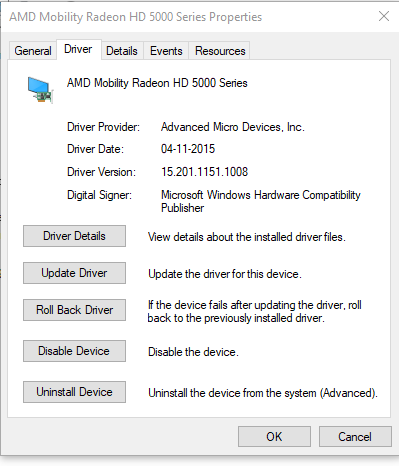 UPDATE I downloaded Who Crashed, and it's showing dxgkrnl.sys as culprit rather than atikmpag.sys that is seen on bsod! I'm attaching a screenshot

Your best would might be to use the Auto-detect software:

These products have driver support for Windows 10 and DirectX 11

If your graphics adapter is included on the list of supported products, please install the latest
AMD Catalyst Driver for Windows 10 to fully enable its feature set.

Not the answer you're looking for? Browse other questions tagged drivers graphics-card bsod amd-radeon or ask your own question.

1
Video drivers for VAIO on Windows 7
0
Windows 7 BSOD when I walk away from the computer
2
BSOD after PC has been running for a while
3
How to solve ATI Radeon 7670M/ Intel HD Switchable Graphics recurring BSOD error?
1
Computer screen stops working after installing graphics driver
2
AMD ATI video driver causing BSOD after installation