I have a MacBook with Mac OS X 10.5 which I'm trying to upgrade to 10.6. When I run the upgrade 'install' I quickly get to a page where I am supposed to 'Select the disk where you want to install Mac OS X'. There is only one hard drive, so it is auto selected - below that I see a warning message and the only button available is the 'Go Back' button.

"Macintosh HD" can't be used because it doesn't use the GUID Partition Table scheme.

Use Disk Utility to change the partition scheme. Select the disk, choose the Partition tab, select the Volume Scheme and then click Options.

I followed the above instructions, and arrived at the last step where I'm supposed to click the 'Options' button. The problem is that I can't click that button, it is disabled - so what am I supposed to do? 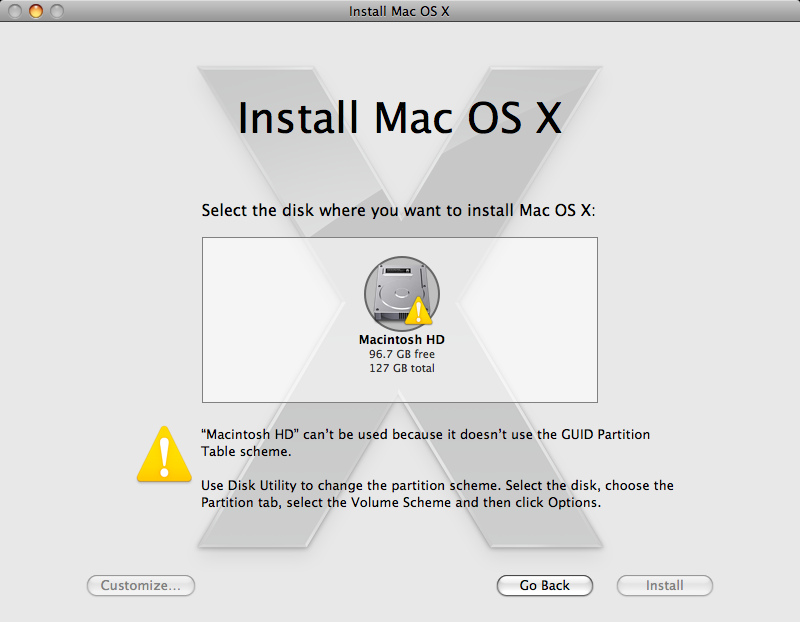 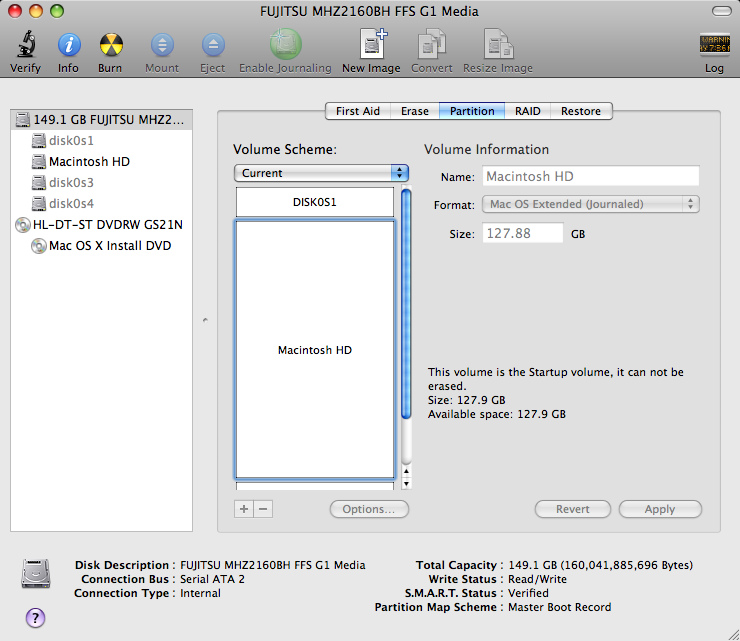 If as you've said in your comments to another answer you are "OK" with completely reformating your drive, then you can do so by booting from the install disc and then running Disk Utility from the install media to convert the drive to GPT and reformat it. Then proceed with your install of OS X.

well I just tried rebooting with the osx 10.6 snow leopard upgrade install cd and rEFIt doesn't notice the cd ... I'm unsure how to boot to the upgrade cd if that is what I have to do.

It's been a long time since I used rEFIt so I can't help there. It should detect the SL install DVD and I don't know why it doesn't appear to for you.

Off the top of my head I would suggest trying:

In order to format and repartition your drive you have to boot OS X from device other than that drive. Usually the easiest way to do this is to boot from the install media. But another last resort possibility is to install OS X on an external hard drive and then boot from it. (Not something I'd recommend, just saying it's possible.)

if I reformat the disk, then I need to do so with the install osx 10.5 cd right?

Nope. You can do the reformat and the install by booting your Snow Leopard install disc. The one disc does it all, upgrade from an older version of OS X or a clean install.

If you can boot from your SL install disc, then after the startup completes and you've gotten past the language screen, the Install Mac OS X screen should display. Click the ‘Utilities’ menu button and select "Disk Utility". You should then be able to repartition your drive as a GPT drive and then install to it.

You do not have to format the drive. I have found another solution to the issue, but it takes time:

I have just done this and it worked for me - my data is about 120GB though so it took about three hours to copy each time.

The message to the right in the Disk Utility window is telling you that because the partition you selected ("Macintosh HD") is the startup volume, it cannot be erased. This is probably important for a couple of reasons. As far as the computer is concerned, it can't erase the hard drive that it's currently running off of. As far as you're concerned, this drive probably contains all of your data, and you shouldn't erase it without a full backup!

Tiger (I believe? or maybe it was Leopard) introduced native support for non-destructive partitioning, but this only works for resizing existing partitions and creating new partitions in the free space on a drive. I don't believe you can change the partitioning scheme (from MBR in this case, to GUID) without reformatting the drive. Once you've backed up your data and are ready to reformat, you can reboot from the OS X DVD and run Disk Utility from there.

All of that being said, I'm not really sure why your drive is formatted as MBR (Master Boot Record). That scheme is supported for compatibility with MS-DOS. I'm unclear if when you say that you only have one hard drive if that implies that you intend to have it partitioned for multiple operating systems, but even if you do, Boot Camp fully supports NTFS-formatted partitions under a GUID partition table. There should not be any drawback to changing to this scheme, other than the fact that GUID-based disks cannot boot a PowerPC-based Mac.

I had a similar issue when upgrading to High Sierra. I'd purchased a SSD and used Clonezilla and TimeMachine to replicate it. Apparently I'd configured it with MBR & it wouldn't up install High Sierra without GUID partitioning. Here's how I got around it in just a few steps.

Not the answer you're looking for? Browse other questions tagged macos osx-snow-leopard upgrade or ask your own question.