I have created an azure virtual machine with the following specifications:

Since I need to connect via Remote Desktop, I followed this guide to install xfce and xrdp. Once finished, I connected to the server with Microsoft Remote Desktop but I noticed an excessive slowness in interactivity. I don't think the problem is my internet connection because:

What could be the problem?

I'm using xrdp w/ KDE and these compositor settings appear to have helped quite a bit: 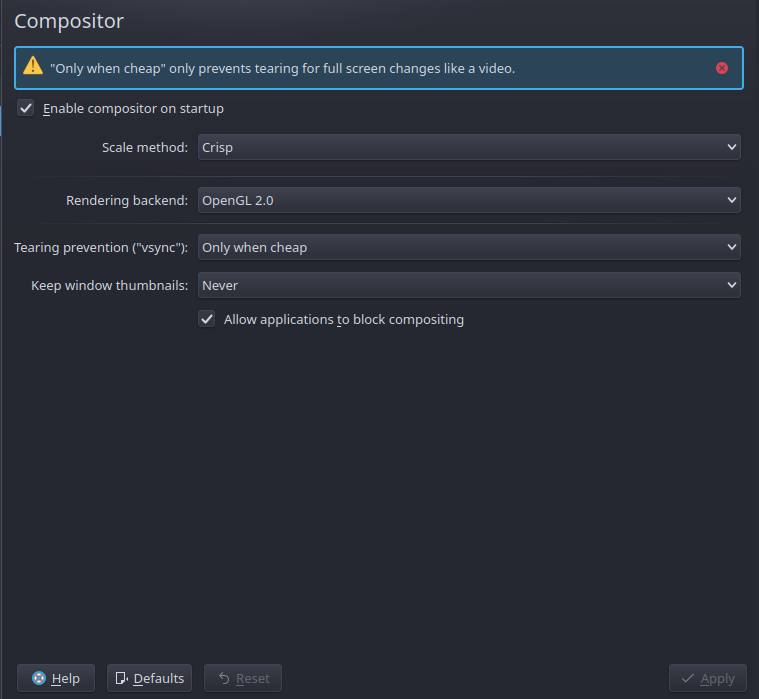 Edit: To update for clarity, these values are in KDE's settings manager under Desktop Effects -> Compositor. They are not client-specific. The example is modifying the server's desktop environment settings to "dumb them down" a little bit.

Since XRDP is delivering the server's desktop via RDP protocol to your client, if XRDP has less data to send it follows that the remote desktop should be more responsive.

There was a question about clients - As far as clients I was using at the time, I'm sure it was KRDC and windows RDP client. I can't recall modifying any default settings on the clients, other than in KRDC making the window full-screen and client native resolution (so I could make it a separate virtual desktop).

Also, there is another response about reducing / eliminating default encryption from the RDP stream should be very helpful in making the entire process less CPU-intensive from end to end, if that's something your environment will allow.

I installed Ubuntu server XRDP. Went through Windows and terribly slowed down. I solved this problem. In the /etc/xrdp/xrdp.ini file, change crypt_level=high to crypt_level=None

I disabled the compositor, as suggested here: https://github.com/neutrinolabs/xrdp/issues/501#issuecomment-262905321

Hello, I have experiment same problem with xfce and ubuntu 16.04. I have disable compositor in xfce windows settings. Now it's work fine.

It made a huge difference, now everything works fine.

If you are using the recent versions, you need to enable the RFX codec. Use the link below for more information. https://github.com/neutrinolabs/xrdp/discussions/2136

Not the answer you're looking for? Browse other questions tagged ubuntu virtual-machine remote-desktop azure xrdp or ask your own question.

0
Remote desktop solution where the desktop sharing party contacts the computer it wants to share with
3
Remote Desktop Connection not working on VPN -- another session in progress?
2
Thunderbird installed via Snap on Ubuntu ignores my profile folder
5
Cannot generate xauth files using Ubuntu on WSL
0
How do I ensure complete blockage of Anydesk or other remote access?
1
Git pull doesn't ask for passphrase