Computer wakes up from Sleeping Mode

Sorry for my English. Computer wakes up after being put to 'sleep' mode. And i don't know what to do. powercfg -lastwake shows similar to this:

Assuming that this port is a problem, i already uninstalled it and rebooted the system, but it dont seems to work. powercfg -requests are clear. All drivers are up-to-date. At this point i don't know what to do.

Why is my PC awake?

Your human interface devices and / or mouse and / or keyboard and / or network adapter and / or BIOS and / or Scheduled Task and / or Windows Update and / or Automatic Maintenance is set to wake your PC.

It is not uncommon to find your PC awake.

Learn to live with it:

Put the PC to sleep when it has been idle for 10 minutes: 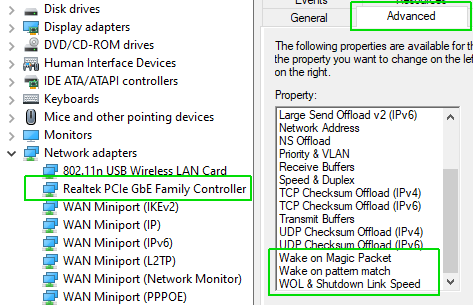 I put my PC to sleep, woke it up with the USB mouse, ran powercfg -lastwake:

I put my PC to sleep, woke it up with the USB keyboard, ran powercfg -lastwake:

See How to tell what wake source is when Wake Source: Unknown

Why is my computer awake? PC wakes up when everything is set to never wake. PC unexpectedly awake.

Computer wakes up from Sleeping Mode

I had the same problem the past few days, but I got mine fixed. Whether this solves it for you - we will have to see:

Out of the clear blue, my machine would wake up immediately after putting it to sleep. There have been no recent hardware or software changes.

I did all of the usual software checks and tweaks, and I was unable to correct the problem. When I first got my current Win10 machine, I had all kinds of wake up problems, but I have since squashed them all, so this was new, and seemed odd that the usual config tweaks, registry hacks, and so on did not solve it.

While I am just as apt as anyone to blame Microsoft for a buggy OS, the fact that this is a host controller / usb issue does imply something hardware. Since I have set all of my mice and keyboards to "do not wake up", perhaps the problem was in the usb controllers or hubs.

First thing I did was go to device manager and uninstall that driver (the usb 3 host controller). I was hoping it would just disable the USB 3 ports, but it basically shut down all usb, so my mouse and keyboard would not work. I turned off the machine from the front panel, and restarted it. The OS found "new" hardware, reinstalled the driver and devices. Once booted, I tried to sleep - same problem, system woke right up. So, resetting the driver did not help.

So, next tweak - turn off the usb peripheral devices. I have several multi-port usb hubs plugged in. One sits right on my desk, and it has a master on-off switch. That was the easiest to reach hub, so I chose that one first. I turned off the power to that hub (if it did not have a switch, I would have unplugged it). My main mouse and keyboard are not on that, so I could continue working. Then, I put the system, to sleep - no problems! - all normal!

I then turned the device back on, but unplugged each device attached. One by one I reinserted the peripherals then put the machine to sleep - no problems. After getting all eight devices back online, still no problems - the machine slept as it should.

It seems that the hub itself was the problem, and that turning it off then rebooting it cleared whatever it was doing. That particular powered hub has been buggy before, and I have plugged devices into it causing power surges or transient shutdown of a plugged in device. It was so infrequent that I never bothered to crawl under the desk to replace it. I do recall that the day or day before that the sleep problem started, that I had plugged in some old flash drives, so one of them I suppose caused some kind of surge and latched up something in the hub. Now, it is gone, a new hub in its place, and hopefully the problem will not resurface.

My suggestion - after doing all of the software and OS tweaks already suggested in this thread - because they are good things to do no matter what - try to troubleshoot the hardware, specifically usb hubs and devices.

Take your mouse and keyboard and plug them directly into your rig through a usb 2 or usb 1 port, then disconnect or power down all other hubs. If that solves the sleep problem, then it is just a matter of being methodical as you bring each device back online and check to see if the sleep problem recurs.

What a relief. I hope this works out as well for you as it did for me.

Not the answer you're looking for? Browse other questions tagged windows-10 sleep usb-3.1-type-c or ask your own question.

14
How to tell what wake source is when Wake Source: Unknown
0
What are the consequences of disabling “HID keyboard device is allowed to wake up computer”?

11
Troubleshooting a Windows 7 PC that wouldn't sleep
0
Windows 7 wakes from sleep mode without exterior notice
14
How to tell what wake source is when Wake Source: Unknown
1
PC wakes itself immediately after being turned off or put to sleep
1
How to tell which application prevent computer from sleeping
0
How to stop my PC waking from AMD USB3.1 eXtensible Host Controller?