Using xrandr, is it possible to use only part of a secondary monitor without panning

there are a few other questions that talk about this but most of them are not for secondary monitors, or at least they don't seem to be, and I've hit a point where I'm not sure if I'm missing something or not.

My 2560x1440 monitor got a crack in it (the screen got bumped with a keyboard while we were moving things around) and it has made the right 2cm and bottom 10cm of the screen unusable. There's still 2480x1140 worth of pixels here which are as good as the day I bought it so I'm trying to set up xrandr so it ignores the portions of the monitor I don't want to use.

My current config is:

The config I have above positions everything fine, including a border that excludes the part of the monitor I don't want to use, but makes up for that area with panning space. 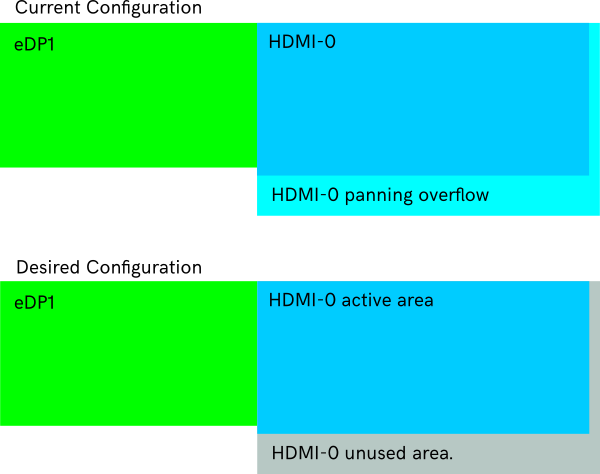 What I'd actually like is for xrandr to disregard the excess of HDMI-1 while still rendering at the resolution of 2560x1440, so all I end up with is:

I tried playing with modelines as has been suggested in other questions down this line of inquiry but I haven't had any luck there, and I can't reduce the framebuffer (--fb) below a size that is big enough for the two monitors together (so for side by side it can't be lower than 4480), so I've hit a point where I don't know enough to progress any further. Is there a way to do what I'm looking to do in xrandr?