Is it possible to attach two pointing devices to a Windows 10 machine and either each have its own cursor or each its own screen?

I've just started casting from my laptop to a big TV for YouTube while doing programming stuff on the laptop screen.

I've found that using my trackpad can be a bit annoying just because the TV screen requires more finger movements to move across the big screen and the pointer is laggy/jerky on the TV screen.

I did find people asking similar questions on MS forums, but they were mostly also asking about keyboards, and perhaps-official answers were saying no, but not providing any technical details, hence I don't trust them. If it's not built-in maybe there are 3rd party tools for it.

(Yes there is YouTube on the TV too but it's less flexible and I can't listen with my wired headphones that way because it's too far away. Also I'm interested out of pure nerd curiosity if it can be done as there are obviously other use cases.)

A recent article reviewing existing solutions that must work on win10.

TeamPlayer used to be an expensive piece of shareware but it now looks like the company has gone and the product is discontinued. Thankfully, there are a couple of free versions of TeamPlayer floating around the internet that still work. TeamPlayer4 Lite is from 2016 and allows for two mouse cursors on screen at once.

After install, the main window will open and all you have to do is press the “Start Session” button. If you have two mice already connected, their cursors will each turn a different color and you can start moving them independently. They are not truly independent because if one user is pressing a mouse button, the other user cannot press a button until the first user has finished, and the cursor turns into a cross. 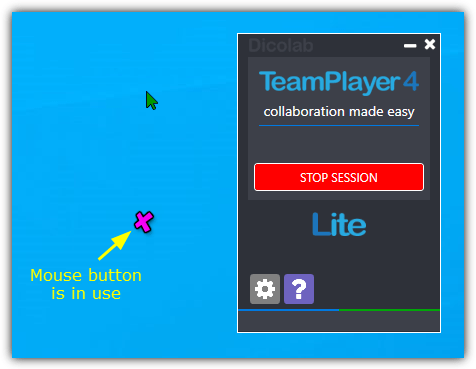 Just press Stop Session to revert back to a single mouse cursor. TeamPlayer4 has no settings to configure and both the options window and the about icon will simply send you to non existent web pages.

Not the answer you're looking for? Browse other questions tagged windows-10 multiple-monitors mouse touchpad screencasts or ask your own question.