I mistakenly cut a flat CAT7 cable I just purchased.

Can I just open the strands on the two ends attach them to each other? Like twist them together and put tape over it? Would that affect performance?

Looks like there are eight little wires in there. I know a lot of delicate splicing and then I have to make sure each wire is separately taped.

Or would it be better to forget about the part that was cut off and buy a connector, like this?

I have more than enough cable so losing length I don't mind. If I take this route, do I have to buy a crimp tool too.

I can't believe how much trouble I created for myself by this mistake. I can't just replace the cable because it has already been pulled through an underground PVC pipe.

I rather not to spend more money if just twisting the strands together would do the job. Cable would be hidden away so no chance of later getting pulled and wires untwisting. 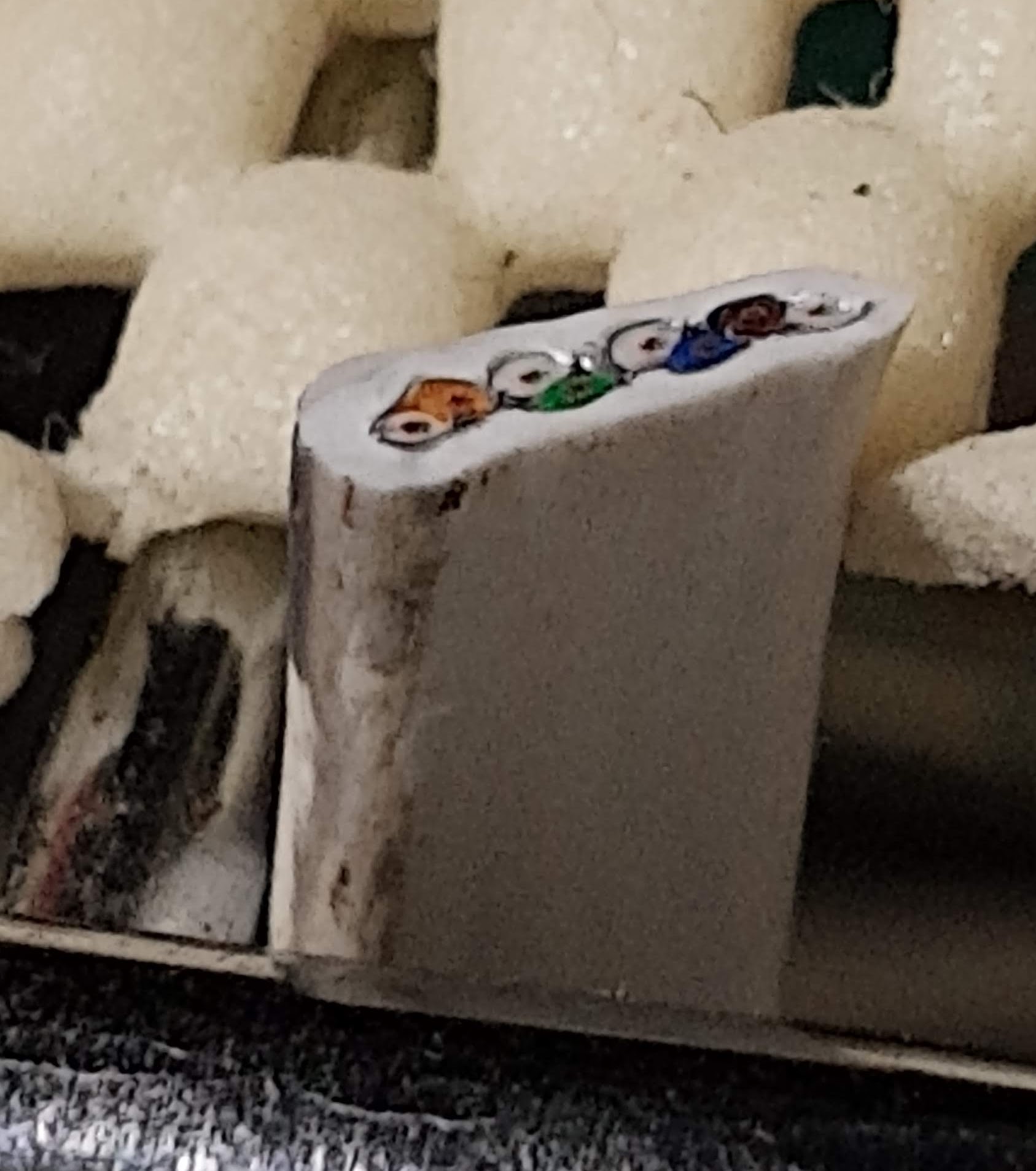 Can I just open the strands on the two ends attach them to each other?

Not if you want Cat7 performance. If you are intending to use this for 10Gbps Ethernet you need to use proper methods for joining and terminating the shielded twisted pairs.

If you are using this only for 12V DC between doorbell and pushbutton, you'll be ok.

Or would it be better to forget about the part that was cut off and buy a connector, like this?

That connector is not suitable for flat-cable, you need a special connector for flat Cat7 cable. To be sure of doing it right you'll need specialized tools too. You probably need to practise on spare cable until you can get it right every time.

You can then use an inline coupler rated for Cat7 (if such things exist) but you should really also use cable performance testing tools across the whole run to check that the joined cables still meet Cat7 standards.

You could just wing it, but the downside is you might get disappointingly poor performance and years of troubles that are a constant annoyance and faults whose cause is hard to trace.

I absolutely don't believe that what you bought would test to Cat7 requirements even when brand new. Cat7 is a proprietary standard, and as such is not terminated normally in RJ45 connectors, but in GG45 - backwards compatible with RJ45 receptacles, but looks more expensive (and is!). And you won't buy the tools to terminate it in a home improvement store. And you won't buy the cable flat. There's not much flat Cat7 cable sold by reputable professional cable vendors, and its uses are specific: multimedia in living spaces without running in the wall. It's not used to be pulled in any sort of conduit. It goes from a jack somewhere, then gets concealed (e.g. under carpet outside of walkable areas), and ends up in something in someone's living room, usually.

You had been had. Sorry to bring such bad news. What you wanted to buy (but didn't know) was Cat8 cable.

There's no splitting Cat7 nor Cat8 cables, pretty much. It's not possible to do in any sort of field conditions while still retaining full Cat7 or Cat8 performance. If done well it could perhaps "work" in that the endpoints were able to negotiate a 10G connection, but it'd be very, very iffy.

I would have had trouble doing even it in a well equipped electronics lab: in addition to a network analyzer (or a comparable instrument), I'd need an expensive test fixture allowing to connect each pair separately to the analyzer ($1k+ just for the fixture). I'd be laser welding the ends of the wire together under a stereo microscope, in a suitable fixture. No soldering anything, and the splice would be staggered, so that one pair each would be spliced every inch or two. That's to minimize crosstalk. Cat7 and Cat8 have quite stringent internal and external (alien) crosstalk specs. I've done it before without any testing other than the network equipment itself, and it worked fine, but it was hard to tell how close I got to the original performance. And it was done just to show that it could be done - beware of bets made over beer. I'd never use it for anything else.

So what you will do if you actually want 10G or 40G performance is as follows: use the old cable to pull a replacement through the same conduit, and forget about the whole Cat7 brouhaha. It's proprietary and you don't need it. And if it's cheap, someone is possibly lying to you.

If you're connecting within the building, then use either Cat8 cables if you truly need 10G-40G performance, or use Cat6e. I have had lots success with Monoprice Entergrade Cat8 patch cables. 50ft white will currently cost you about $50. There are other vendors, but you must inquire on homelab or similar forums about who is reputable. A random Amazon seller - not so much. If they are not in business of actually selling networking cable (and typically other networking gear) - forget about it.

If the underground connection is between buildings, then you're asking for trouble by using copper cable. And the trouble will come when you get a lightning strike close enough. You'll be pulling a replacement cable as well as replacing some gear. Not good.

Thus, for inter-building connections, you'll use your cut cable to pull one or two pairs of half-duplex LC-terminated single mode fiber patch cords (2 or 4 cords in total). Those are relatively cheap to interface with, but you're looking at about $300 worth of fiber and transceivers to get one 40G link up, with an extra two fibers dark as backup or future expansion. I'm assuming you have the network cards that support 40G SFP+ transceivers. If you want to be switching at those speeds - well, that gets expensive...

I suggest you use this cable to pull some strong light cord (e.g. paracord). The join can be made really solid - knot the paracord tight around the cable 25-20 cm (6-8" from the end), and tie off the loose end. Also knot the cable round the paracord. The end result will be not quite a fisherman's knot as the cable is too stiff; a sheet bend would work but leaves the end of the cord sticking out too much. You can also use use fairly small cable (zip) ties pulled tight.

Wrap over the join with electrical tape, starting at trailing end and finishing at the leading end so the edges can't snag. Pull the tape quite tight except for the last 2 turns.

If it does break, don't panic. You can get a string down a conduit with access only at the ends, using materials you have or can buy cheaply (vacuum cleaner, kite string, paracord, duct tape).

To elaborate on the other answers, the difference between Ethernet grades of cable is shielding.

The wire in your photo has parallel untwisted wires with a simple nylon sheath. It might have foil wrapping around the wires (hard to make out). So it might make it more like 6a than 7. Either way, assuming you want to maintain the shielding, I would put a Cat7 keystone on both ends and buy a 1ft or 3ft Cat 7 to go between. Crossing your fingers and trying to put RJ45 in is asking for trouble. A Cat7 keystone is rated to maintain the shielding. Just be aware you might need special tools to install one

If you don't care about the shielding, just go to your local hardware store and buy some Cat6 ends and do the same thing, but with mere Cat6.

To answer your implied question of "is this fixable" then yes it can be bodged together with twisting, wire nuts, scotch locks, solder, etc and will "work"

The problem comes when you expect this link to perform at its rated throughput and maintain a higher link speed.

I've seen these cables work perfectly at 100 Mbit but get repeated transmission errors at gigabit. 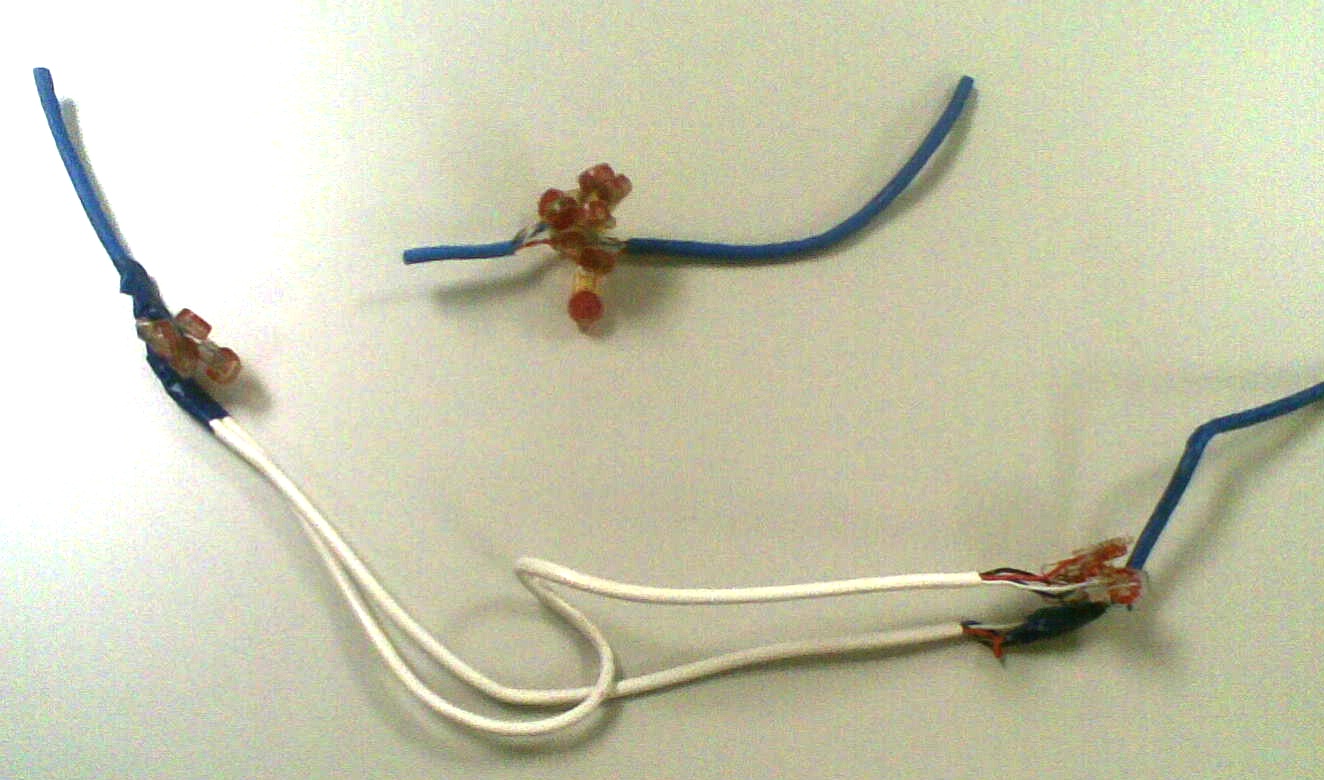 Point is - even if you did fix your cable, and it works at your current speeds, it could easily fail when new kit is attached to the ends.

Answer Replace your broken cable with new ones so there's spares. Run draw wires too for next time/future upgrades. Consider how it got cut and avoid doing that again.

Since this is buried, its also a potential fire risk if some future user puts POE across the link too. And its a trap when pulling other cables through in the future.

Using the tips I got on Superuser and to avoid pulling through a new cable through conduit, I spliced the damaged Cat7 cable together using White B-Connector Wire Splices for Low Voltage (100 Pack) suggested by @Machavity. Took about 20 minutes of heavy concentration. I can't be happier. I am not seeing any reduction in throughput. I am getting 200 mbps with this repaired cable and a new one. Of course, there could be drop in transmission speed if I was using this cable for very fast connections. I can't measure that because I don't have the equipment. Thank you so much for the help. Superuser forums have saved my behind many times. 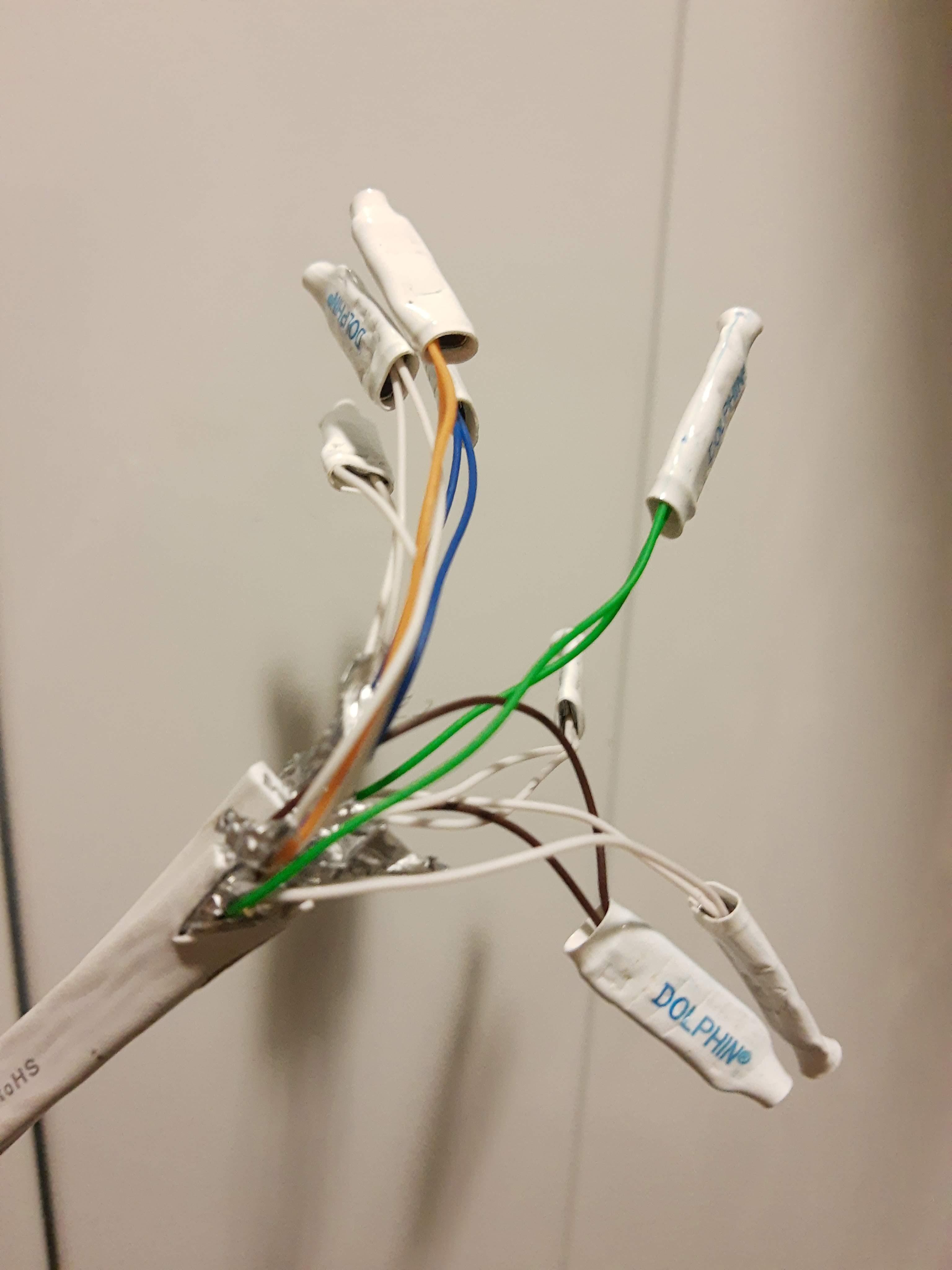 Not the answer you're looking for? Browse other questions tagged networking cat7 or ask your own question.

31
What is best way to share wifi with a building next door?
10
What connectors do I need for Cat 7 cable?