I am using Windows 10 Home on an Acer Swift SF315-41. The wireless adapter is a Qualcomm Atheros QCA61x4A Wireless Network Adapter.

My WiFi was working fine recently, I had no power supply so it was running low on battery. Right around when the battery was around 10-20%, I decided to put it on sleep for a few hours until I got the power supply. After a few hours, I opened the system and the WiFi was gone. I cannot find it in the list of available networks.

This has happened earlier and I used to do this: I went to the device manager and in the network adapter section, would choose Qualcomm Atheros Wireless and I would disable and enable it. This fixed the wireless problem for me.

This time I was unable to find the WiFi adapter in the device manager's network adapter section.

The adapter has both WiFi and Bluetooth modules in it. The Bluetooth is working fine. However, the Bluetooth adapter wont show in Device Manager either, instead it shows "Bluetooth Device(Personal Area Network)".

I tried various ways to fix it, including installing official drivers from the manufacturer's website and updating the BIOS. I also installed a related Windows update: Qualcomm Incorporated - Ports - 3/25/2016 12:00:00 AM - 2.1.2.2.

For further diagnosis, I check Windows Event Viewer and searched for logs around the time of the incident. I found a power log (see below) that corresponds to my issue, and occurred right after the computer came out of sleep mode.

I have also seen some other users having a similar problem and some recommended bizarre solutions such as 'Turning off the PC and removing the power cord for 10 seconds' or leave it as it is and Windows will fix it, to updating certain drivers (Since this one was for Intel Adapter, I didn't apply it). I would like a more fundamental solution that I can understand.

I also tried other suggested solutions such as:

I assumed the issue was closely related to power. But now it seems to me that a software issue is more likely.

Please suggest how I should fix this?

So I tried the method of running it in a different OS, and I tried it both on my dual boot system (On Ubuntu) and a bootable usb drive. And the wifi did NOT connect, in fact it showed wifi adapter not found in settings!

Losing all hope, and I was quite convinced that this is a hardware issue, I switched off the PC for a few hours, even removed the power cord and after that, I booted into Ubuntu again, and there it was working again. I have read a similar fix working for some user, i.e., switching off the PC and removing the power cord for 10 seconds did the job for them. Unfortunately, 10 seconds didn't work for, but a few hours did!

I would still like to know possible reasons on this.

I suspect a hardware problem with the card. I always check this type of problem with a bootable Linux usb stick. That way, you can very easily rule out any software issues. I use a bootable Ubuntu USB (how to 2). It takes little time to make one, and will be much easier than trying to troubleshoot everything that can go wrong in Windows.

Why I think it's a hardware issue

If it wasn't a hardware problem, the WiFi card would've probably immediately worked in Ubuntu. Also, removing the power cord does not change anything to the software, but has some influence on the hardware. Therefore, the source of the problem must be hardware. Also, I have had seemingly the exact same issue (sometimes it would work days on end, but intervals kept getting shorter), and replacing the WiFi adapter fixed everything permanently.

Further info on the behaviour

Intermittent functioning of a device such as a WiFi adapter is not unheard of when its hardware is failing. It doesn't necessarily fail in a binary way. However, if it fails at a certain point in time, the OS will think it's failed for the remainder of that session. When you reboot, the adapter has another chance to work. Therefore, a WiFi card that works 99% of the time, actually seems quite broken. Every time it breaks for a few seconds, it's broken for the rest of the session.

What to do now 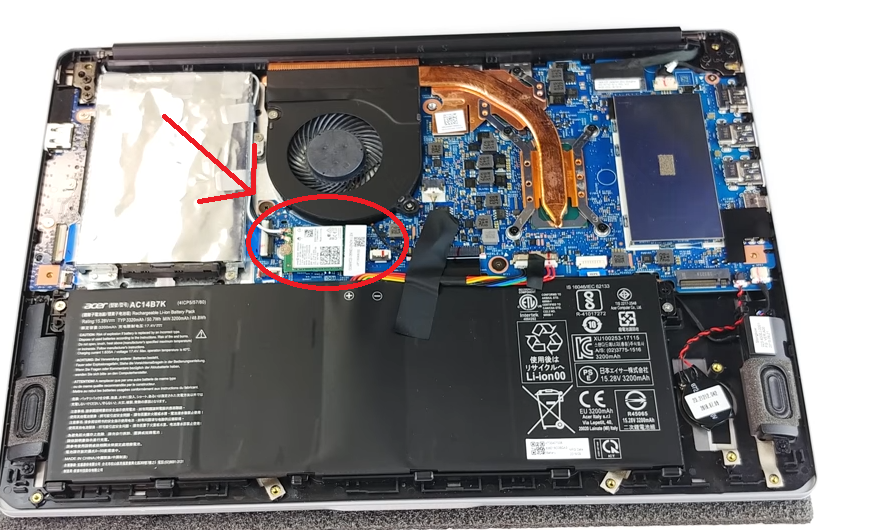