How can I send an Outlook 2007 email containing a linked image?

I want to send an Outlook email that contains an externally hosted image, but I can find no options in the UI that lets me do this.

I want to insert the image's URL somehow, and have it appear as an image in the email (as if I'd inserted a picture from my file system), rather than as a clickable link.

It's the sort of thing that can be done easily enough in code, just by including an HTML <img> tag in the body.

Is there a way of doing this with the Outlook UI?

The external image I'd tried this with was a .png, which, using the Insert Picture dialogue and pasting in a URL, appeared as a clickable link.

Following Ivo's answer, I had another go with a .JPG, and it displays as an image. However, this image is embedded, not linked.

Perhaps I wasn't clear - apologies. I don't want to take a copy of the image and send it. I want to include the link, not the image, in a way that

a) Ideally, renders the image in the email while it's being composed

b) Much more importantly, downloads the image from the external link and renders it when the email is received and then opened.

Outlook can render newsletter-type emails that have linked images - I want to compose one like that.

I found this here.

With a value of 1 you’ll include the picture with the message instead of as a link. If the value is set to 0 or when the key is missing you’ll send a link.

3rd party Edit: Here's a screenshot of what the "Send Pictures With Document" setting should look like: 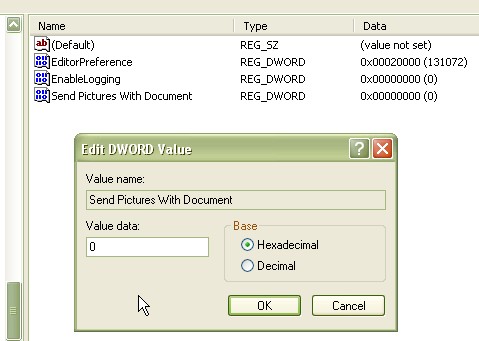 Under File Name, copy paste the URL instead of a local file

Edit: According to this Outlook 2007 Help page

Insert a picture from a Web page

Insert a linked picture from a web page

I finally found the answer to this and decided to share my newfound knowledge. The process is somewhat obfuscated, but it's not too bad.

The first thing you need to do is make the HTML file you want. Just open notepad and put the html in that you want in the document and save it as .htm.

My apologies, looks like the document must be made using microsoft word or it will not work. In other words, instead of creating an html file from plain text, open Microsoft Word and make a document then save as filetype htm. Then you can edit it to add raw html like pictures.

Finally, go like you're going to compose an email. Click Insert > Attach File. Browse to the file you just made, and select it but do not actually insert it. The Insert button on the bottom right should now be enabled with a small arrow to the right. Click the small arrow, and click "Insert as text".

This will pull all of your raw HTML in. What's better is you can actually add text, change formatting, and tweak it if you like. Be warned that tweaking may result in undesired results, so I recommend sending it to yourself as a test to see if it will show up correctly when it's sent.

That's it, no registry changes required. Anyone should be able to do this relatively easily.

I had the same problem with Microsoft Outlook 2010.

Going to "HKEY_CURRENT_USER\Software\Microsoft\Office\14.0\Outlook\Options\" there was no Mail key. I simply created it and followed Raithlin's answer.

Upon restarting Outlook it now works perfectly! I hope this helps someone else in the future!

The need for the Registry tweak may depend on the Outlook version. According to this, "the default for Outlook 2013 is already to link to the pictures instead of embedding them so there is no need to set this value." (of the registry key).

4
How can I insert a remote image into an email (without attaching it) using Outlook 2007?

4
Hotlinking images in Outlook emails
3
Compose new Outlook message with image embedded
4
How can I insert a remote image into an email (without attaching it) using Outlook 2007?
0
hyperlinks >995 characters are not clickable in Outlook 2007
7
How to prevent a URL in an email I send from being auto-linked by the recipient's email client?
1
How can I insert a link in Outlook to bookmark it when clicked?
0
Sending MS Publisher Document (or PDF) as Body of Email
8
Send HTML email in Outlook 2016
1
In Thunderbird, while composing an email, how to convert it from plain text to HTML?