I give up. Python refused to be recognized in Command Prompt despite multiple attempts to add to PATH

I've downloaded and uninstalled python so many times trying to get this to work. No matter what happens I always get "'python' is not recognized as an internal or external command, operable program or batch file."

All i want to do is download new modules with PIP. Ive tried the suggestions on so many forums. My environment variables has "C:\Users\Owner\AppData\Local\Programs\Python\Python38-32\Scripts" in both User and System variables.

Even in the autonomous WinPython command lines and IDLE i cannot access python in its command line. 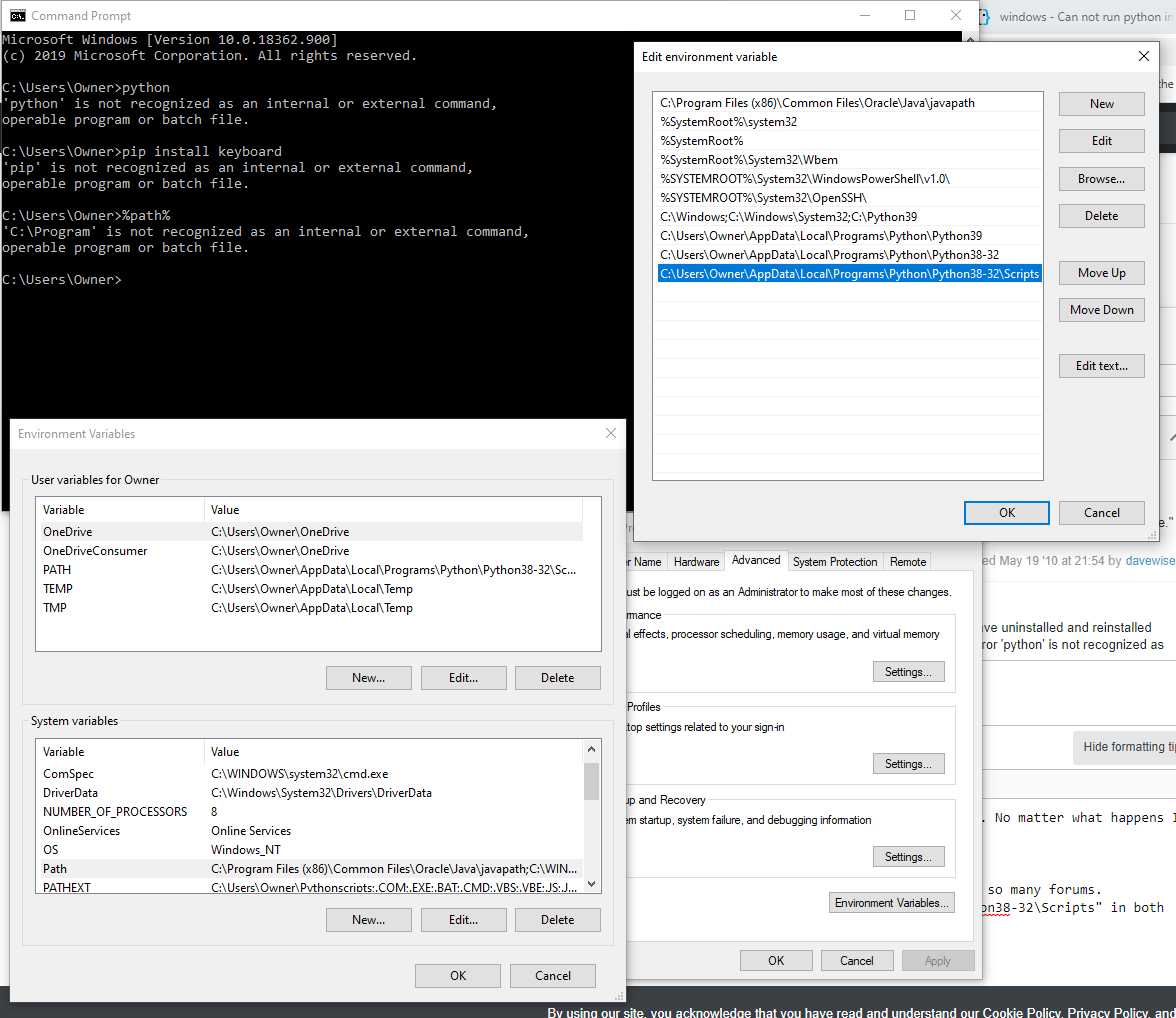 Delete all the environmental variable references to Python in your screenshot. This includes:

As well as all the references in your System Path (as shown in your screenshot):

At best, only two of these would work from the command line directly (one of your Python39 references for python and one of your Python38 Scripts reference for pip) and these aren't even related to the same installation, so they cannot work together for installing modules correctly.

Note that you can certainly keep the entries you remove aside (e.g. in Notepad) in case something breaks, but overall, unless another program relies on them, your current layout is not generally the way to handle multiple Python installations on Windows.

Add One Installation Back

There two ways to approach this. First, you can simply pick an existing installation you would like to access from the command line and add it back to your environment variables (I would recommend using your System Path variable rather than your User PATH). So:

Reboot before testing python or pip from the command line.

If this doesn't work for some reason (or you want to ensure a minimal number of potential issues in the future), I would suggest uninstalling Python (again) from C:\Python39 and both copies of Python (3.8 and 3.9) from your Users folder.

Afterwards, pick one copy of Python to be your primary installation available from the command line and try following these installation guidelines I wrote for another question. I would be particularly aware of using a custom folder and avoiding C:\Programs Files, C:\Program Files (x86) or anything under Users for this installation (these can all potentially cause problems).

Is there a way to just download new packages without pip?

Yes. But as fair warning, while certain modules can be simple to install (assuming you intend to do this), others can be relatively time-consuming (or worse).

The modules that pip accesses are all downloaded from the Python Package Index. Each "project" (module) hosted there has an individual page that has a Download files link for the files hosted on PyPI and (possibly) a Download link if an author has provided an alternate source to download the project files from: 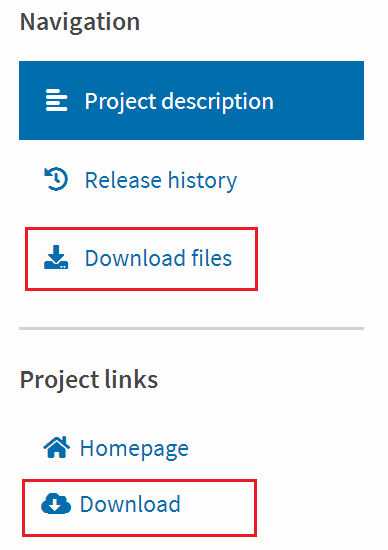 As a caveat, while some modules may not have any dependencies, some modules rely on other modules to operate correctly. Unfortunately, it isn't always easy to discover what dependencies a module might have without additional research.

Another pitfall is that some versions of the same modules may only be intended for certain platforms (e.g. Linux, but thankfully these are often marked appropriately).

All I want is to be able to get the last modules I need for my code so I can send it off[.]

pip is probably the last tool you want try using right now, but to be clear, pip does not have to be directly available from the command line as just pip (via your environment variables) to be used to collect or install packages correctly.

Based on your comments, assuming you chose to install pip with Python 3.7 (pip.exe is present in C:\Python37\Scripts), you should be able to access pip for your Python 3.7 installation one of two ways:

With vanilla Python on Windows, environment variables are generally not required to actually run python.exe or pip.exe successfully for a single Python installation.

Just a thought, but if you don't care to type long paths and can execute .bat (batch) files from the command line, you may want to consider creating a "helper" batch file e.g.:

This could allow you easier access to pip from any folder with that batch file in it.

Full disclosure: It is still possible to get an error similar to the ones your seeing above if you try to execute ex. fake-pip in a directory that doesn't contain this batch file.

Otherwise, as long as you are careful about keeping this batch file wherever you are working on the command line, you should be able to side-step the "not found" issue you are encountering above.

For instance, to install a module into Python 3.7 with fake-pip.bat, you should be able to open a command window in the same folder and use:

to install that module correctly into Python 3.7.

Note that if you want to simply have a copy of the module and its dependencies on your PC (ex. to put on a disk and give to someone else), you can instead use the download option for pip:

Not the answer you're looking for? Browse other questions tagged command-line python environment-variables path pip or ask your own question.

0
Anaconda can't run Python script in command prompt
3
Anaconda 4.6.11: Python interpreter is in a conda environment, but the environment has not been activated
0
Commands in CMD prompt are not regognized
0
WIN 10: Python directory is wrong?
0
Errors in Anaconda after pip install pyqt5 (or conda update spyder)
3
Why does venv Python interpreter say "no module named __" when pip freeze & reinstalling indicates the module is installed?
0
Error during installation of pip on win10
1
Can not run python in cmd prompt
0
Struggling to get git-filter-repo to work