I am on Windows 10. I first installed Git for windows and then I installed posh-git in PowerShell.

which works fine. But when I do git commit in PowerShell, git brings up vim.exe with the following text:

If I press i I enter insert mode. The problem is that now the space key does not move the text to the right. It simply moves the cursor to the left and it is impossible to delete the text that is already there: 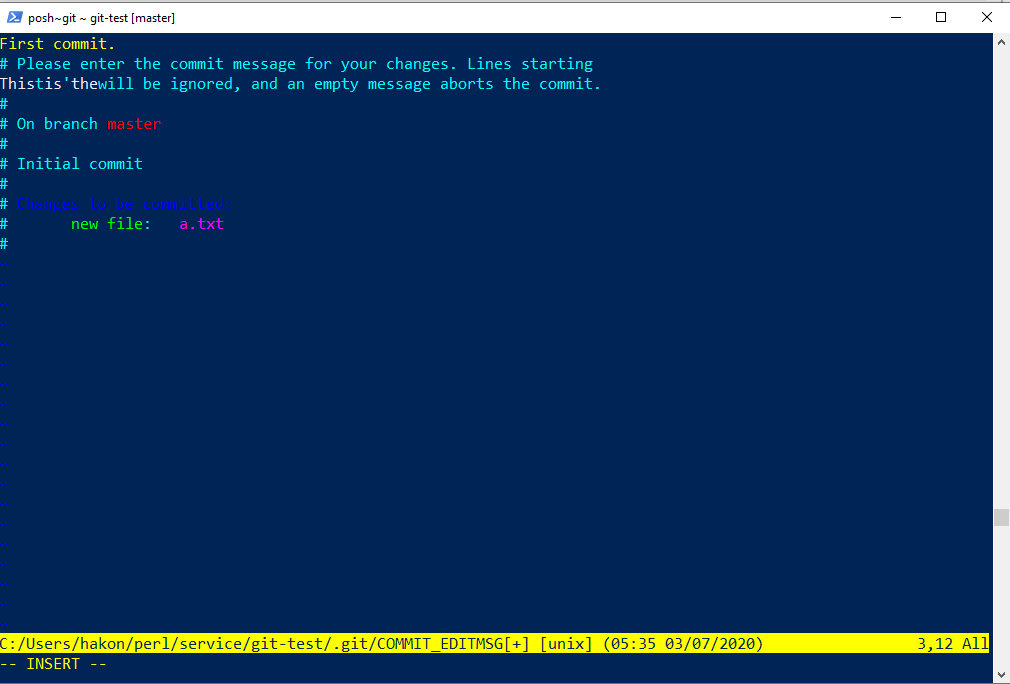 As can be seen from the above screen shot, the predeclared text cannot be erased. Any idea what is going on?

It's likely that your terminal settings are not correct. Programs designed for Unix systems require the TERM environment variable to be set in order to function correctly. This tells the program's terminal library how to interpret characters that are typed and how to render data properly on the screen.

Values of TERM that folks have seen work with PowerShell in the past, according to some Googling, include cygwin and msys. If you're using the new Microsoft Terminal, you may also be able to use xterm-256color.

If you're not sure how to set an environment variable, here's an article that explains it.

Not the answer you're looking for? Browse other questions tagged windows powershell vim git or ask your own question.

8
gVim as git editor under cygwin
4
In Powershell, is there a way to save a typed command into history without executing it for later execution?
3
Can I git clone into a directory without cloning the project name as a directory (using bitbucket)?
2
Can't (re)install Git for Windows after issue with previous install
2
Github for Windows unable to locate Git on my system when opening the command prompt
5
Using ANSI escape codes in Powershell prompt to add color, looses meaning after executing some console processes, like git
0
Tortoise Git Commit Lost
0
Issue Embedding Git Bash in RoyalTS
1
Repo with a hundred thousand assets (tiny mp3 files): git and GitHub workflow?