how to know if RAM is my bottleneck

I use a lot of Chrome, Outlook, Office some basic editing tools like Notepad++, Postman, SoapUI, etc. I tend to have 10-20 chrome tabs open at all time (although I daily fully shutdown my laptop). I notice that my laptop is often slow. My memory is normally close to 8GB, but never really at it. Here is a screenshot of my current usage.

Would it benefit to add an additional 8GB of RAM, or shouldn't that matter? 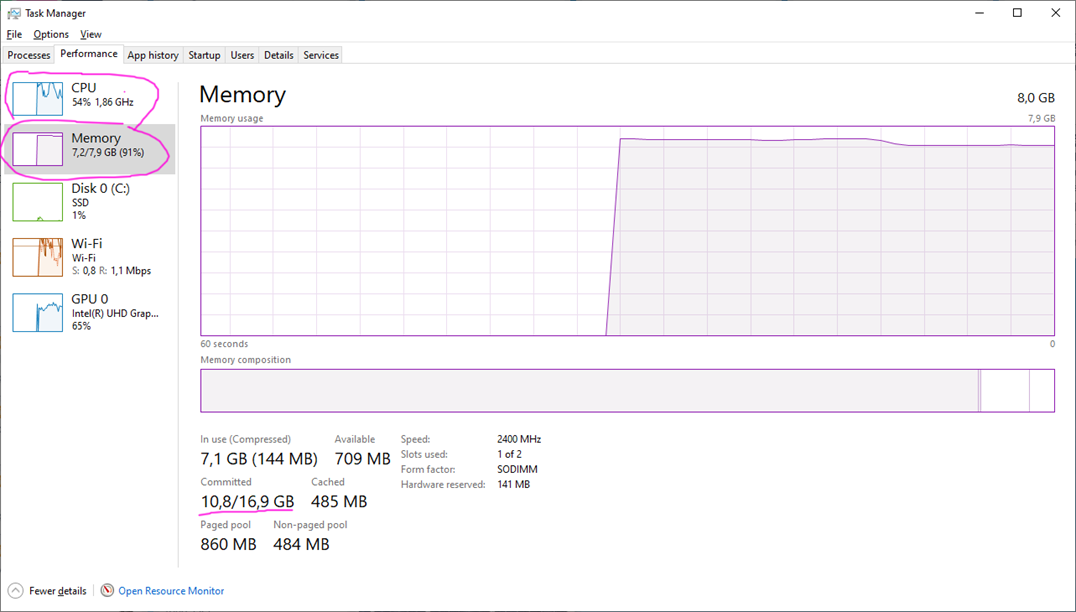 In the memory bar, you can also see a small line. That line indicates how far the cache goes. You can also see that the OS is only able to have 485 MB of files in cache. That means: reading files may be slow, because they really have to be read from disk.

If you have more RAM, it will look like this:

However, it seems your disk is not busy yet:

Therefore I'd say you're just in the right spot where you get the best out of your RAM without wasting anything. That should make it sometimes slow, not always. However, you might soon reach a point where disk activity increases even more and it will become even much slower. In that case, if not now, you might want to look into a RAM upgrade.

We can't see much of your CPU, but IMHO it's quite high:

If that is a graph that always looks like that, then I'd say the CPU is the bottleneck. Unfortunately it's not so simple to upgrade CPUs.

Another issue could be throttling of the CPU because it becomes too hot. Have you looked into the cooler? Maybe it's full of dust and can't cool down because the air flow is blocked.

Windows manages your memory to always keep some free space in RAM so that you can launch new application. It caches less used memory to your hard-disk/ssd and loads those content when necessary. In conclusion, you should add more RAM, as an alternative you can upgrade your storage to ssd if you have hard-disk as your storage.

"Often slow" could be the CPU. Chrome ought not be a problem, but if you have 20 tabs open and you are not using an ad blocker, the non-content script many sites use will impact performance. Occasionally I look at the block counter on a site and it is blocking 150+ items. If they weren't blocked, the page would barely scroll. You can check the script console in the developer tools for chrome and watch how heavy and often some of these scripts run.

One thing about RAM capacity that is not often mentioned is not the swap-to-disk behavior which does impact performance, but that Windows will cache files in any excess memory (this is the "standby memory"). The standby memory can be cleared instantly for program use so it acts like free memory, but those cached files can be "read" several orders of magnitude faster than if Windows needed to get the file contents in real time from storage.

As an example, I have a very simple and naive LAN transfer test program that is basically a stopwatch which reads a large file from a server and then just throws away the bytes instead of writing them. The first read of a 600MB file is about 840Mbit and takes "a few" seconds. It gets cached by windows automatically and the second read is around 46,000Mbit and completes in .09 seconds.

So if your normal use-case is like in your screencap, more RAM might help in perceived performance simply by virtue of having space to cache files.

As far as CPU, you can use programs like Process Explorer (run as admin) from Microsoft to get a deep dive into where the CPU cycles are going and when.

Since Adblockers and Process Explore are free, I would start there.

Not the answer you're looking for? Browse other questions tagged laptop memory or ask your own question.