Run exe when computer is inactive for some time

Following an advice given to me in this question I have made this question. So I have an exe I want to run after the computer is idle (by idle I don’t mean sleep, I mean inactive or not being used) for sometime lets say 30 mins. Once the “inactive” timeout reaches I want the application to run. Saying that my PC is set up to only have the option “Screen sleep after “ in the Power options no Computer sleep, so the PC doesn’t go to sleep or the screen gets lock-screen unless I forced it using Windows+L keys, and I want to keep these settings as it is. I want to detect an inactivity time period and once the inactivity time period is reached then I want to execute an exe. Any idea how this can be done?

I've followed the steps provided in the answers:

Created a new task, added a trigger, set it to event: on Idle and created the task. In the conditionstab, specified the task waits 1min to become idle (instead of 10min just to test).

But then I wait for more than 10mins and the task is never triggered on PC1 but triggers on another PC2. I've checked online and found that PowerCfg -requests will show what is stopping the PC from being Idle and when I run it on PC2 nothing returns but when I run it on PC1 I get this "Legacy Kernel Caller" driver.

What you want is easy. You can do it using task scheduler.

When creating a task, under Conditionstab, you have the option to start the task if computer is idle for: . In there just put how much idle time you want. 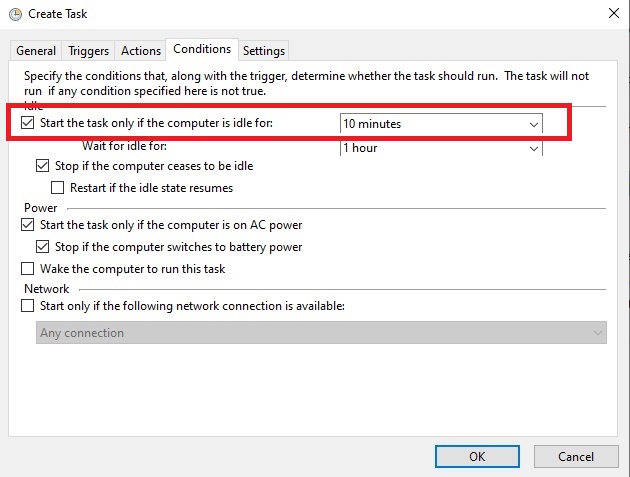 Just program the .exe you want to run, how often you want it and then use the idle condition.

The far easiest solution is to use good old Task Scheduler.

Create a new task, add a trigger, set it to event: on Idle and create the task. In the conditionstab, you can specify how long the task waits to become idle (you set this to 30 minutes).

In addition, you can also automatically kill the task when the system becomes active again all from Task Scheduler.

Sorry not in c# but is easy enough. This is a perfect job for AutoIt: http://autoitscript.com

Here's a script I threw together for you. Put it in an .au3 file, replace notepad with your exe, and for Run, include the full path:

You can use schtasks from command prompt to make the task easier:

Not the answer you're looking for? Browse other questions tagged windows power-management powercfg idle or ask your own question.

38
What's Keeping My Computer Awake?
20
Legacy Kernel Caller preventing sleep mode
4
Where are changes made by the PWRCFG.EXE command line utility stored?
0
How can I view events that cause laptop screen to turn on from standby (but not sleep)?
6
Windows 10 won't sleep or turn off after being on for a few hours
0
How to configure Windows to lock screen on sleep/wake but not on display-off
0
How can I enable sleep when idle, but only outside of work hours?
1
Run a task when screen sleeps
0
Task scheduler On Idle task not triggered Windows 7