Paste textbox from Powerpoint to Word as an editable control

I have a Powerpoint 2007 file that contains a number of textboxes and shapes with text on them. I can edit, resize, change the text, etc. in these boxes in Powerpoint. However, if I select an item, copy it, and paste it into a Word 2007 document, I can't edit it. I can resize the entire thing, but it acts more like an image than a text box. I've tried the paste special options and keep source formatting options, but still can't edit it. Is there a way to be able to paste the editable content from Powerpoint and still have it editable in Word?

I found this question that appears to get to the root of the problem:

It should work in earlier versions of Word and Word 2010, but not Word 2007. This is quite frustrating as I have to edit the slide in Powerpoint before copying it into Word. While doable, it adds another step, but the problem is that everyone who wants to update the Word document will have to do the same thing, adding complexity and steps for everyone. If I embed the Powerpoint slide in the document, I can edit the controls, but they don't scale the same way and takes a lot of work.

In Word 2010 select the dropdown menu under Paste 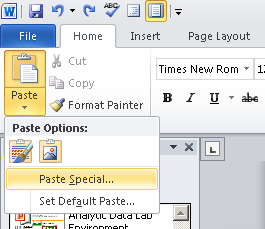 The issue here is that when you copy a complex element like this from prowerpoint it does indeed render it and save it as an image, so you're right it behaves like an image because it is.

In some cases when the products are compatible you can paste complex items into another program. It's odd that word wouldn't accept powerpoint material (as they are pretty similar). Personally I've been able to do this using Office 2010.

Try selecting each element individually (holding shift) then copy and paste, that may have some effect.

In Powerpoint, just use the Copy command.

In Word, select the dropdown menu under Paste and select Paste Special.

In the dialog box that comes up, select Picture (Enhanced Metafile) and click [OK]. The objects including text you have pasted are editable.

In Word 2007, even if I use Paste special - picture (enhanced metafile), it still copies the diagram as an image. However it does look less distorted than with a normal Paste.

I just discovered the button Edit picture on right click, it seems to work well. The drawback however is that upon edit it doesn't recognize diacritics, which become unreadable, so the text will look well after the edit only with normal English alphabet letters. Also it recognizes each text row as a separate text box.

The following actions seemingly solved the issue in my case:

You can copy the text from a PDF file saved (Save as .PDF) from the DOC(x) / PPT(x) containing Microsoft Drawing Object. Took me some effort to figure out this workaround.

6
PowerPoint 2007: Paragraph and character styles?
2
Embed Powerpoint slides in Word document
1
Is there a way to permanently remove highlighting from editable areas within a protected word document?
23
Automatically resize picture/image in Word?
8
Break link with external document MS Word
0
Copy text and border from Word to MS Paint
0
Is it possible to insert an Excel Chart in Word as editable graphics?
0
Macro for cropping website and paste it to powerpoint