I found this script courtesy of Google, which remove all Local Accounts, but I would to keep these: Administrator, DefaultAccount, DevToolsUser, Guest, sshd, User, WDAGUtilityAccount Can someone help me?

PowerShell has built-in cmdlets for managing local user accounts, so those should be preferred over a custom module (provided you're running a high enough version of PowerShell):

From left to right:

There is a PowerShell module on the PowerShellGallery.com for just this use case.

So you could just do this...

You could do the same thing for the Remove cmdlet.

Deleting a local account sounds like one task, but it will at least consist of the following three steps:

There might be even more steps, but I have not found any documentaion on them so far. As there are several steps to perform, it is probably a bad idea to use too atomic functions for that. The Remove-LocalUser cmdlet and the net tool (with net user <username> /delete) are such atomic functions. They suggest to delete a local user - which sounds good - but they actually (only) delete the user from the local user account database. This might be sufficient for some scenarios, but be aware that registry keys and the profile directory will remain!

Microsoft offers a macro function to completely delete a local user account, unfortunately only in the GUI. You can find it through Settings > Accounts > Family & other users. Just select a user and click on Remove, then on Delete account and data. This will perform all three steps from above.

There is also a macro function to (just) remove the profile of a user. You can open it via Control Panel > System > Advanced system settings > Settings... (button in the User Profiles panel): 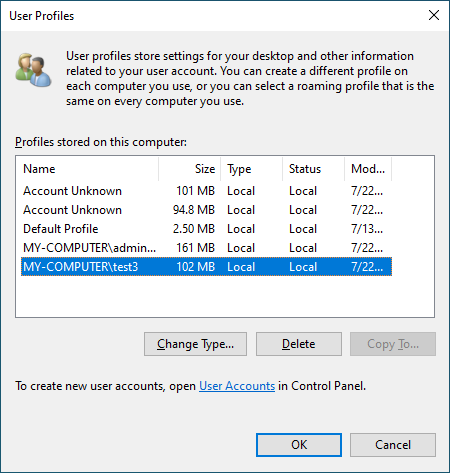 You can also open this window directly by executing rundll32 sysdm.cpl,EditUserProfiles in an elevated PowerShell. It is important to open this window with administrative privileges to see all user accounts and not only the own account (even when opening via GUI).

Deleting a user account through this window will perform steps 2 and 3 from above.

Wondering what the two unknown accounts are? They are the remains of two deleted accounts, one deleted by the Remove-LocalUser cmdlet and one by the net tool.

As you are looking for a PowerShell solution, we can at least perform the three steps from above manually, as long PowerShell does not provide a cmdlet to do all the work at once:

This function is ready to be used in a pipeline, so you could delete all users except the ones you want to keep like this:

But currently (in PS v5.1.18362.752) the pipeline between Get-LocalUser and Remove-LocalUser is bugged, which will also affect my function above. The following pipeline (without Remove-LocalUserCompletely) will only remove every second user account from the account database of the accounts that should be deleted:

You can work around this by using a loop instead of a pipeline (now with Remove-LocalUserCompletely):