I'm having trouble installing Windows 7 Pro x64 and I've listed below the steps that I have taken so far. If anyone could point me in the right direction on how to solve this, I would greatly appreciate it.

The laptop has Windows 10 Pro installed on it. I created a Windows 7 Pro x64 USB Flash and the USB flash boots, but when I click on Install Windows, the following message pops up:

Windows could not retrieve the information about the disks on this computer.

For creating the USB Flash, I used the following settings: 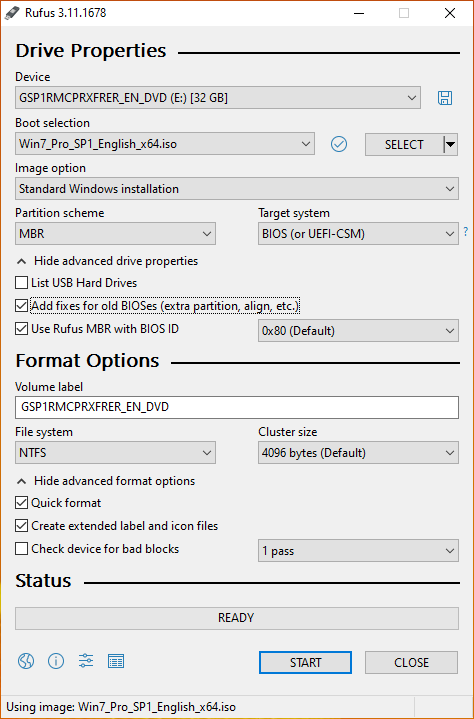 The hard disk that I am trying to install it on is NTFS and when I check the disk using DISKPART, the hard disk is non-GPT.

If the same version of Windows 10 was already installed on this same computer, then Windows 10 will activate automatically once it is installed.

The Microsoft license servers keep a hardware fingerprint of the computer, which is called "digital entitlement". As long as you have not changed the hardware in a significant manner, such as replacing the motherboard or the network adapter, Windows 10 will activate without the need for a serial key.

Install Windows 10, and when Windows 10 prompts for the key (twice in fact), hit the "Skip for now" button and let Windows 10 install.

Afterward, if it does not activate itself after a couple of reboots, you may do the activation manually.

See the article:
You do not need to Activate Windows 10 to install it, but this is how you can activate later.

I would recommend using the Drive options (advanced) to delete the offending partition(s).
(since there shouldn't be any data on there in your case this should be fine).

(WARNING: This deletes all data!)

This gets the disk space into the unallocated state:

Click next with the unallocated space selected and it will create all the partitions it needs as part of the install process.

But here's a detailed guide I found that also follows the same process: https://www.lifewire.com/how-to-clean-install-windows-7-2624917

GPT Partitions won't allow modifications to any partitions once they are set with any operating system installed (Windows 10 Pro) in your case. You need to delete all of your partitions of the HDD and then create a new one from the installation menu of your Windows 7 installer. Then only you can proceed. That's the main problem with GPT partitions, once they are set... doing anything requires a full hard drive clearup.

Make sure you backup your important data of your HDD before you completely erase all partitions in order to make your HDD partition table into MBR.

5
How to install Windows 7 x64 on GPT?
3
Windows 7 startup hangs when loading disk.sys
5
Troubleshooting "Windows cannot be installed to this disk. The selected disk has an MBR partition table"
0
Install Windows 7 Ultimate x64 as UEFI with GPT
1
Windows ignores GPT disk and converts to MBR during installation
0
GPT option is not available in Rufus
0
Windows 10 USB flash drive not booting, but linux (ubuntu) does
1
unable to install windows and remove manjaro
0
Cannot install Windows 7 in native Windows 10 machine