In MS Word 2016, I'm using "Insert Caption" function for labelling, cross-reference and for the table of figures.

The standard scheme of the Caption is "Label" "Number". Is it possible to change the Captions scheme to "Number" "Label"? Such change is needed for labelling, cross-reference and table of figures. 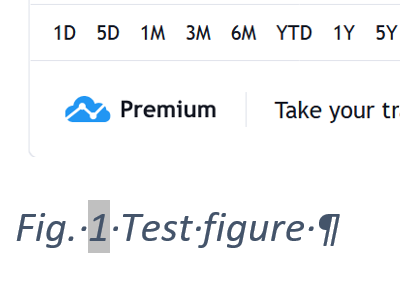 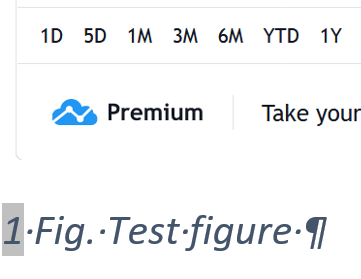 You can't change the sequence that the Insert Caption dialog uses. What you can do is check the Exclude label from caption option in the dialog box, then type the text part of the caption after the field(s) that Word inserts. Or you can insert the whole caption manually.

A caption such as a Figure is quite simple. It consists of a piece of plain text (the label) and either one or two field codes for the number part, like this:

You can insert captions manually just by using the label part and field(s) as Word uses. Word uses the paragraph style Caption when it inserts figures, tables numbers etc., so you might want to do the same as Word.

So, assuming the one-field numbering, you could insert

(The { } have to be the special field code brace pairs that you can insert using ctrl-F9 on Windows desktop Word.)

You can save that as an autotext or autocorrect to make it easier to enter.

The question is, does everything else that you need to use still work as you expect?

Well, if you have a table of Figures, Word inserts a TOC field like this for captions with the label Figure

However, when Word searches for captions to include in the Table of Figures, it doesn't search for the label Figure, or the paragraph style Figure. It searches for { SEQ } fields whose sequence name is Figure. So

will appear in the Table of Figures, but

So you should be OK if yo wan to insert a Table of Figures, unless you want the table to show the label before the number even though the captions show it afterwards.

You should still also be able to use the Insert Cross Reference dialog box because when you select "Figure" in the Reference Type dropdown, it also searches for SEQ fields with sequence name Figure. It even recognises that the Word Figure is the label even when it comes after the number.

So the only problems would be if you wanted the references to be the other way around from the captions (e.g. Fig. 1 rather than 1 Fig.), or you wanted to use the "Only caption text" option and end up with the text "Fig. Test figure" rather than "Test figure"

At least, that is how it all works here on Windows Word. But you should verify those behaviours for yourself. For example, I have an RTL script language enabled on my copy of Windows (and at one time on Word) and I suppose that might have an effect on how Word recognises captions and labels.

Not the answer you're looking for? Browse other questions tagged microsoft-word caption or ask your own question.

5
Word caption style — different style for label and number?
23
How can I include only part of an image caption in a table of figures in Microsoft Word?
6
MS Word: Chapter number always showing 1 (but zero in Figure) througout document
4
Word 2007/10 hide figure label in table of figures
2
MS word: different caption style for figure and table
1
Word 2016 - Table of Figures Missing Entries
0
Insert only figure number, without label, via cross reference in word
3
Word: how to find `_Refxxxxxxxxx` codes for manual cross-referencing?
1
MS Word confuses captions and cross-references
0
Manually created Figure/Table labels in Word not showing up in List of Figures and List of Tables