Shortcut that opens a command prompt and runs an application

I know how to make a shortcut to cmd.exe and set the start-location to my target directory. But I would like the shortcut to run an application in the console window... basically my application run with no commands will print a welcome message, instructing the user how to launch it. he user then interacts with this command-prompt as normal.

So I want a shortcut that will:

You can use this:

You can create a shortcut. Right click on desktop > New > Shortcut. Then put the code there and give it a name. You can also put it in a batch file.

If you don't want to keep command prompt open, but wait termination or a key press.

I think what you're asking for is something like this in a .bat batch file

Create a new file called shortcut.bat. In the file create the following:

Assuming your executable is a console application, you don't need start: 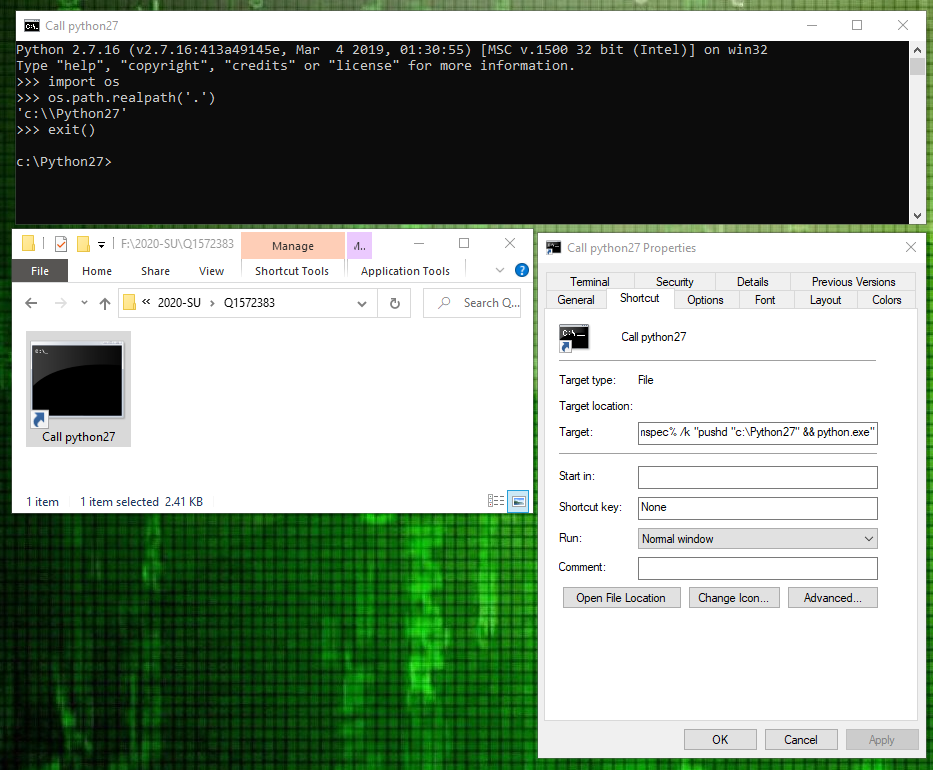 2. When invoking the command interpreter, instruct it to remain by /keep with the cmd.exe opened, without "auto quit/exit" when finalizing the "command passed".

3. Use the target directory as a working directory with check directory command cd directory.

4. By default, the command-line interpreter (cmd.exe) will assuming the %windir%\system32\ as a working directory, by adding cd or pushd, you can define your working directory as you wish/need

5. Use the /D switch in your cd traget_folder to ensure that it also changes the drive when invoked.

6. Use " quotation marks " when passing the path to your folder to the cd command, to potentially prevent any error event related to any folder that contains any special character or even spaces in its name.

7. Use the && operator, this will respond for any correction that may be necessary in case the path is wrong, has been changed, etc..., and also avoid the execution of the subsequent command where it would also return in error, thus, it will only return an error and proceed without execution, facilitating any future correction of the path if necessary or changed

8. If the previous execution was successful (without error, the same as return 0). The operator will proceed with the next command, starting python.exe, and since this is a console application, the interface will remain in the same window, and using the directory assumed as work directory for the folder previously signaled until this execution is finished by the user and if this happens, python interface console ends and the interpreter cmd.exe remains open (/keep) and in the same work folder.

9. As we are invoking the command interpreter and passing multiple commands, it is recommended to inform/define that this will be restricted to a block, and we do this by delimiting/defining between double-quotes, since we are using a single line:

10. Assuming you want/need to make use of this shortcut by pointing a UNC folder path in your command, you will need to use some compatible way to enter and remain in your pointed drive/folder, in this case, use pushd, but also works with regular drive/path.

Obs.: If you use pushd, use also popd command to return a folder previously assumed to be the work directory at the time you want and already removing the drive temporarily created in the initial pushd execution.

That was inspired by @spikey_richie idea:

Not the answer you're looking for? Browse other questions tagged command-line shortcuts or ask your own question.

34
Batch file that runs cmd.exe, a command, and then stays open at prompt
7
Is there a way in Windows 7 to create a shortcut to a command-line (console) application and leave the command window open?
73
Elevated command line prompt can't access shared drives
0
How can I issue the 'prompt' command from a batch file in a Windows command prompt?
5
Is there a shortcut to open the Node Command Prompt in Any Folder?
1
Send dynamic argument to an application through its shortcut
46
How to open Command Prompt in a specific folder as Administrator?
0
Command prompt disappears after a split second of launching the application
0
Command Prompt Shortcut .lnk That Runs Program