EDIT: (Not applicable anymore, question reopened). Why this is not a dupe of the linked question?
The view from the question side: AFAICT (and now I already applied the solution, so I cannot test), in my case the default app change I set never took effect. In the linked question, the title suggests it worked during the current session.
The view from the answer side: The solution there hardly applies here. (Even if it worked, I conceptually think they should not be regarded as duplicates, but this is of minor relevance).
The view from the community side: From the practical standpoint, if tagging as dupe decreases the chances this OP is found, it may be detrimental for others having a problem similar to this one... the search parameters may be (quite?) different from those for the other OP.

Is there any way to fix this, either via the Registry or something else?

The default app per-user is defined via the registry entry HKEY_CURRENT_USER\Software\Microsoft\Windows\CurrentVersion\Explorer\FileExts\.pdf\UserChoice.

However, setting it directly is impossible because of the protecting Hash entry. If the hash does not agree with Progid, Windows will reset it to the default entry. 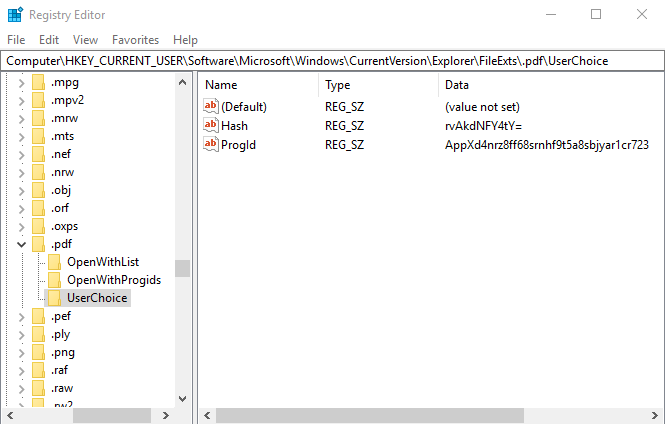 To avoid the headache of creating the Hash value, use the SetUserFTA utility. The utility is described and downloaded from the article
SetUserFTA: UserChoice Hash defeated – Set File Type Associations per User or Group on Windows 8/10 and 2012/2016/2019.

The method described by harrymc, with SetUserFTA, works very well. To change the association one has to enter

The key point, which took me some time to find, is the correct ProgID for Adobe Acrobat. The way I found it is searching the registry for acrobat.exe (launch regedit.exe, and then <Ctrl>+f -> acrobat.exe, with all 3 checkboxes ticked).
I found key HKEY_CURRENT_USER\Software\Microsoft\Windows\CurrentVersion\Explorer\FileExts\.eps\UserChoice contains values (as Name/Data) Hash/<hash> and ProgId/Applications\Acrobat.exe

and voilà, Acrobat was the default application. I checked this worked consistently by alternately executing the above and

which alternated between Acrobat and Reader as default applications.

Not the answer you're looking for? Browse other questions tagged windows-10 pdf adobe-acrobat file-association or ask your own question.