I have a set of files that mostly end with numerical extensions [sda2.000, sda2.001, etc.], which makes me think they are some kind of bulk backup of a drive. I have not been able to find any information about what software created these by searching on the web, using 7zip to open file sda, which showed two files with a .ntfs extension (7zip couldn't do anything with the other files).

What are these files and how do I read them? 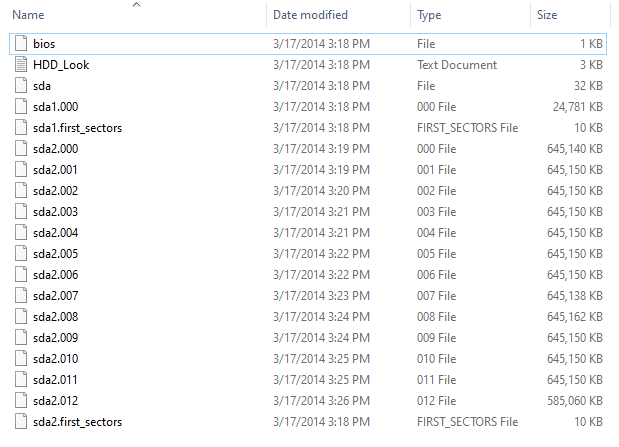 These are chunk files. The original file was split into 645 MB chunks so they fit on a CD. They don't make any sense alone. You have to concatenate them in correct order (by ascending extension) to get the original file.

There's not much one can say about the original file just with the knowledge that it was split, but your folder looks like you're dealing with some kind of disk images created using Linux-based tool (sda = first disk supported with the sd driver, sda1 and sda2 are its first two partitions).

What I think 7-Zip is doing here is it recognizes your chunk files and tries to interpret them concatenated as a whole. Apparently the format is supported (or partially supported) and indeed there's a disk image inside containing a NTFS filesystem.

The "HDD_Look" file has quite a distinctive name, so I've googled it and found this forum thread. Apparently it's a disk image created by PING software, which is an obscure Linux-based disk imaging tool. It's probably using some specialized imaging software under the hood, like partclone or ntfsclone or possibly simply dd. Your file are slightly over 8 GB total and dd would produce an exact byte-for-byte copy of the partition, so I'd expect the image to either be significantly larger or be a multiple of 1 GB +/- 1 MB, so I'd rather guess it's one of the former ones. The file utility on Linux may be able to tell you more.

Not the answer you're looking for? Browse other questions tagged backup file-format or ask your own question.

3
Unknown file format, need to open!
5
Ways of backup and restore/recovery in Windows 7
0
How can I backup my laptop to my ubuntu PC over the ethernet using clonezilla?
1
Player for playing .mp4sub files
0
rm: cannot remove 'file': No such file or directory
0
Incremental Snapshot Style backups with rsync on NTFS
5
Are there technical reasons why specific directories can or should be excluded from backup in Linux, and what are those directories?
0
Should files with the "hdr" file extension end with newline characters?