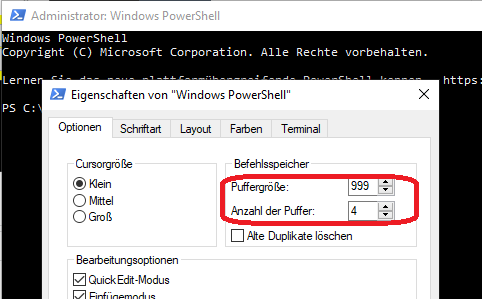 But only if I start it the "same way". A second starting procedure seems to have it's own "storage" and does not give me the same result:

What exactly is going on differently (internally) when opening PowerShell through one or the other way? Can I force it to open the "same" Powershell by using a switch with the Run dialogue?

My first guess was there are two copies of powershell.exe out there, but both processes show they started the same binary in %WinDir%\System32\WindowsPowerShell\v1.0, with one showing up as PowerShell.exe and the other powershell.exe. It looks like some kind of parameter through the Win+X options, to start a second profile?!

If you start PowerShell directly by executing its executable: 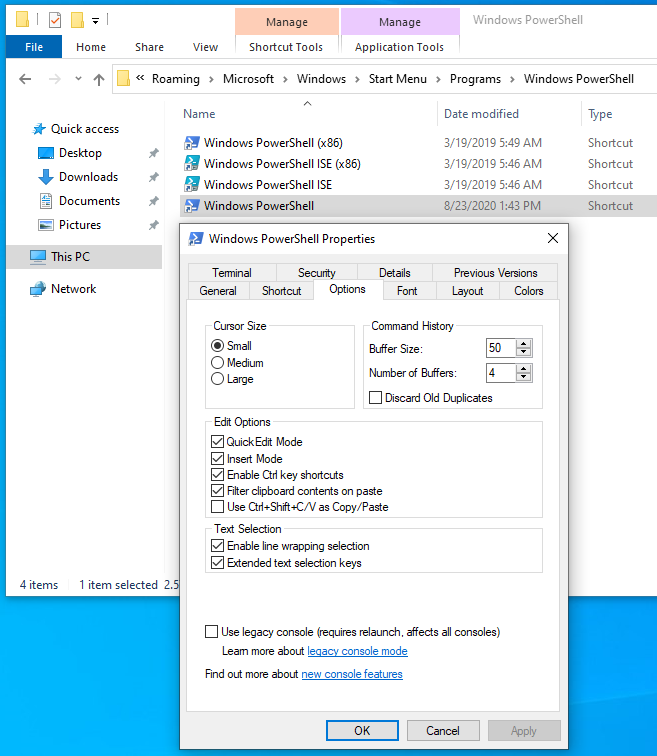 Back to your original query... as for this...

What exactly is different when opening PowerShell internally

... that is not a thing at all. Windows PowerShell is part of the OS. Starting PowerShell is the same no matter what. There is no concept of internal/external launching of PowerShell.

When you use the Run command cmd.exe, Win+X, etc these are all new PowerShell instances each time and has nothing to do with storage, etc. Any settings you make in a session is only for that session.

If you want to keep those settings, the only way to do this is, one, create desktop shortcuts or modify the existing shortcuts, (i.e, right-click the shortcut and click properties - just as you would with any other Windows shortcut) and set the properties you want.

The second way, for PowerShell, is to create and use PowerShell profiles. This really day 1 hour 1 in a PowerShell training class.

The PowerShell directories do not exist until you create a profile, or you manually create them is what @JW0914 is trying to say here. Just start powershell.exe and then just do this...

.. the start powershell_ise.exe and do the same thing and that creates the 'WindowsPowerShell' directory ...

and the two profiles will be there as

These are just empty files, base as noted will a location where you can set whatever preferences you choose and they will be used unless you start powershell.exe or powershell_ise using the -noprofile param.

See the Powershell help docs on it.

Not the answer you're looking for? Browse other questions tagged windows-10 powershell or ask your own question.