Today I created a new profile on a fresh install of Thunderbird Version 78.2.2 on Windows 10 (Build 19041). When clicking the "Use a master password" checkbox, a password prompt pops up, asking me for the password of my Windows account (see screenshot -- the greyed out portions are my account name). I'm told that the same thing happens in Firefox.

It seems like a legitimate prompt from the Windows operating system. But I'm a little confused as to why it is needed. Does it use some kind of keyring built into Windows to store the passwords? Does creating a keyring in Windows require the account password?

Regarding credential storage, it appears that Thunderbird didn't create anything under Control Panel\User Accounts\Credential Manager, according to the "Last Modified" timestamp. So that's not the reason. 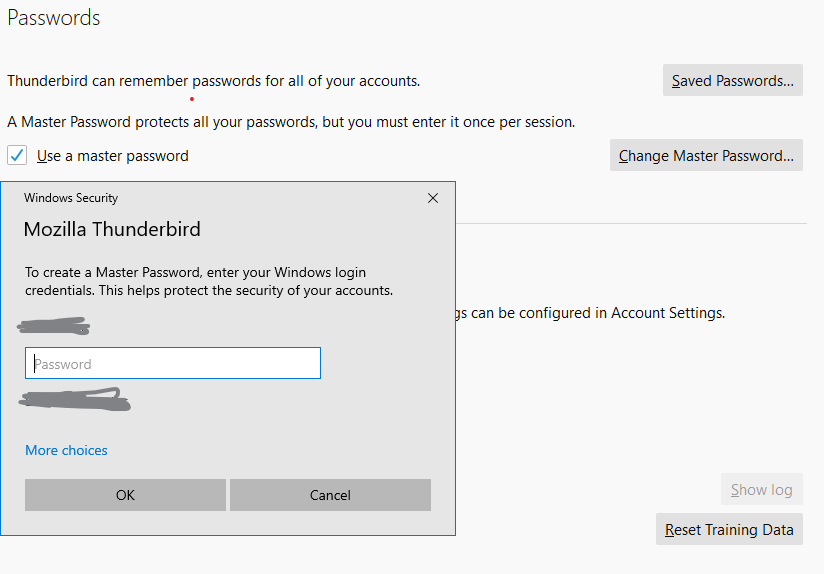 Thanks to the comments by @Ramhound, I was able to refine my web search to include Firefox, in addition to Thunderbird. That turned up more search results. Here's what I found out:

This feature is just there to prevent the most basic attack by the most unskilled attacker imaginable. And to annoy its users, apparently, because Mozilla quickly disabled the feature after the initial release of Firefox 76 due to a user outcry. Apparently it was now reintroduced (at least to Thunderbird, I don't use Firefox so I can't confirm).

Note 2: Additionally, it's a very poor design decision to ask for the operating system password for anything but signing in to the operating system. If you teach users that it's okay to enter the their Windows password in their web browser, you open the door for all kinds of scams. Websites could easily fake this Windows login prompt. And yes, scientific studies have been done on exactly that topic, where up to 20% of unwitting users fell for that ploy.

Note 3: It is now called Primary Password, instead of Master Password because of the origin of the term "master".

Not the answer you're looking for? Browse other questions tagged windows firefox passwords thunderbird or ask your own question.

79
What is the little twist in this floppy ribbon cable for?