How can you tell if Windows XP is 64bit or 32bit if you only have the partition/filesystem on a hard drive?

I'm currently doing my father a favor and setting up an Oracle VM with WinXP on a Win10 host PC. I have the old SSD with his original WinXP partition from some years ago. The data was saved and is accessible on his new Win10 PC. For his convenience I want to set up the same 32- or 64-bit version of WinXP pro as he originally had. But the only way for me to find this out, is to read the old filesystem of the WinXP partition over an IDE-to-USB converter. Since the rest of the computer is discarded, there is no processor whose name I can google. I also tried booting the hard drive with no success.

So my question is: How can I tell if a Windows XP partition is 64bit or 32bit if I only have the filesystem of hard drive mounted as a external USB drive? Like, is there a specific file to read out... or does a specific directory has to exist, or something like that? 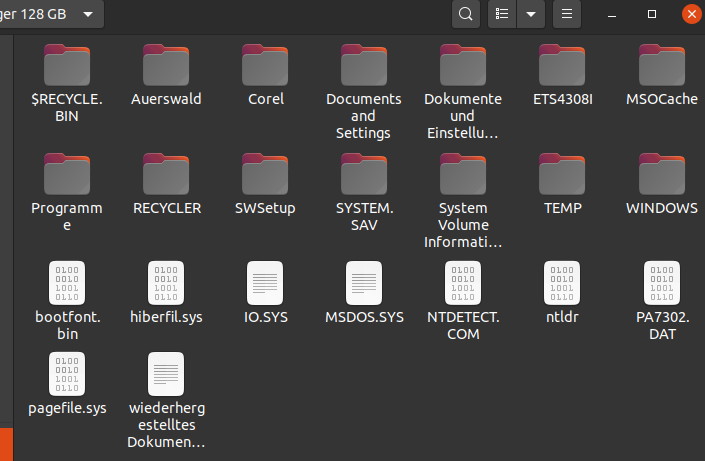 The old Windows XP Professional filesystem mounted over USB to my (not his) Ubuntu 20.04 machine.

64-bit Windows XP is actually quite unlikely, 64-bit and larger memory configurations gained traction in the consumer markets sometime after XP, and XP was somewhat quirky due to the lack of manufacturer support for 64-bit.

That said the presence of two folders will tell you the system is 64-bit. If you have

Then your system is 64-bit. If both of those are missing then you have a 32-bit system.

64bit XP was super rare due to hardly anyone wrote 64bit drivers for their hardware.

If you have the Windows partition mounted on a Linux system, you can use the Linux file command to determine if the installed Windows was 32-bit or 64-bit. Pick a file in the \WINDOWS directory that came with the operating system and see what the result is:

I'm currently doing my father a favor and setting up an Oracle VirtualBox VM with Windows XP on a Windows 10 host PC. I have the old SSD with his original Windows XP partition from some years ago. The data was saved and is accessible on his new Windows 10 PC.

So my question is: How can I tell if a Windows XP partition is 64bit or 32bit if I only have the filesystem of the hard drive mounted as an external USB drive? Like, is there a specific file to readout?

If you really wanted to spend the time, you could mount the proper registry hive if it still exists on the HDD, and determine what the system properties indicate. Based on the information you have it's likely not going to be possible to explicitly confirm if they were not using Windows XP Professional x64 Edition.

Your screenshot indicates there isn't a Program Files directory, which should exist, even on Windows XP. There are additional folders, that do not exist but should exist, like your father's user profile directory.

Not the answer you're looking for? Browse other questions tagged windows-xp virtual-machine filesystems 64-bit 32-bit or ask your own question.

1
Can XP 32bit use the Windows 7 64bit upgrade?
2
Can I run a 32bit version of Windows XP in a Virtual Machine, on a 64bit machine running Ubuntu (64bit)
2
How to migrate WinXP from failing old HD to new one
1
Install Linux Mint on PC without bootable CD
1
Running hardware with only 32bit drivers in 64bit windows
0
How do I recover files from a corrupted filesystem without losing folder structure?
3
Can a large hard drive (3 TB) make Windows XP 32bit un-bootable?