How to install Unity tweak tool and themes in Ubuntu 20.04?

I'm using Ubuntu 20.04 Desktop, and I'm still using apps that do not work in gnome (my VPN for example.)

I've installed Unity 7.5 as my window manager, and everything works, but the theme is not my favorite I switched it in settings->appearance->theme to high contrast, and now I'm stuck with that - there are only two options in the drop-down and both are high contrast it seems.

After selecting adwaita, I think I'm in high contrast mode because my settings panel looks like this: 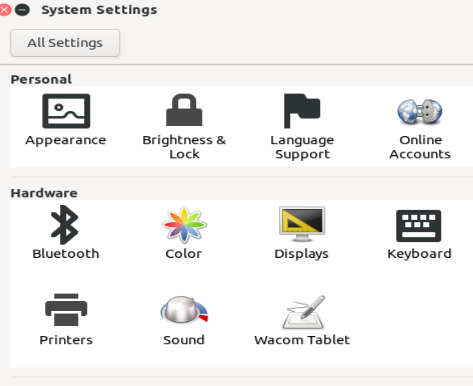 How can I add a theme?

It installs but does not run, instead, I see:

It also shows an error in the GUI, but does not launch. I think every tutorial I found to add a theme requires the tweak tool.

A subset of nycnik's answer got it working for me:

The answer to installing lens apps is here

Partway down, it shows how to install the tweak tool:

After running those (I suspect it was actually the first one in the list), unity-tweak-tool will run as expected, and you can choose a new theme.

Not the answer you're looking for? Browse other questions tagged ubuntu themes ubuntu-unity or ask your own question.

12
How do I remove KDE from Ubuntu if I decide not to stick with it?
5
Latest Ubuntu Desktop without Unity
6
Launching gnome-shell-timer in Unity?
2
How do I install themes for Gnome3 in Debian 7?
3
How to Fix schema com.canonical.indicator.datetime not installed error?
1
Ubuntu messed up during install
4
Cannot change the desktop wallpaper in Ubuntu 14.04