I have noticed for a while now my laptop, upon start-up, shows that I have 2 corrupted SSD's. This is concerning because my laptop should be super great. I wasn't too alarmed until I started researching a bit and noticed that while in the Disk Manager I cannot seem to see the SSDs. I only see the HDDs.

Is there something I am missing because on start-up it loos like the SSD's are corrupt but then it looks like they've been cloned and are fine? But if that's true then what would make me unable to see the SSD's in the Disk Manager? If they are corrupted, how can I repair them? I don't care about data loss. I simply would like the disks actually usable and viewable.

Here are some photos: 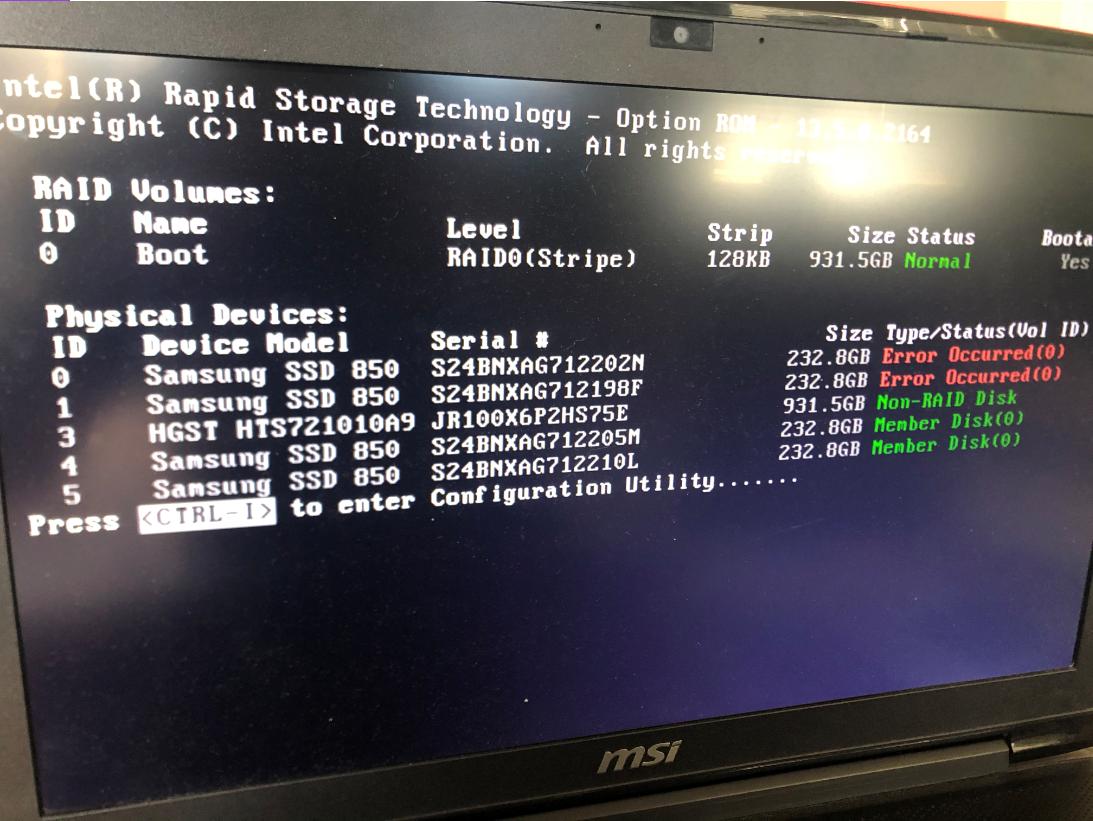 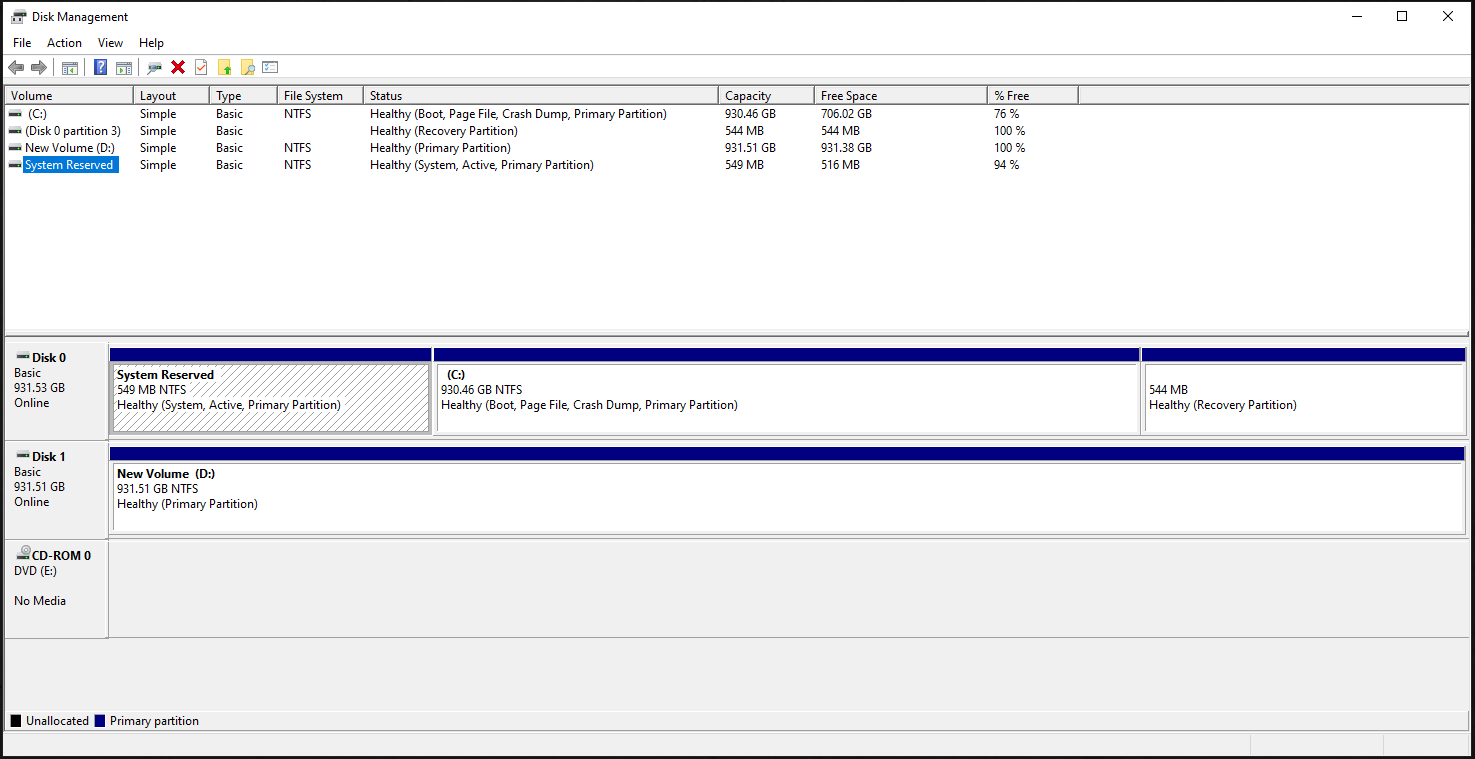 Some SSDs appear as two. Maybe you have two physical SSDs that appear as four in total.

in the Disk Manager I cannot seem to see the SSDs. I only see the HDDs.

You actually see everything you are supposed to see. All four SSDs in question are members of the RAID0 volume with ID 0 (this ID appears in parentheses after Member Disk or Error Occurred).

If effect the OS sees the RAID volume of 931.5 GB (strictly: GiB) instead of the four SSDs, and a non-RAID HDD of very similar capacity. Inability to see member devices is normal when RAID is handled outside of the OS. In your case Intel Rapid Storage Technology handles the RAID. As seen in the photo, you can enter its configuration by pressing Ctrl+I before the OS even starts. From there you can disassemble the RAID volume and make all its members visible to the OS.

Don't do this (at least not yet). Destroying the RAID will not necessarily erase the data, but it will make it inaccessible until you reassemble an equivalent RAID0.

"The data" means the content of one of the two disks you actually see in the Disk Manager. Formally I cannot tell which one it would be, but because it makes so much more sense to put C: on fast SSDs than on slow HDD, I'm pretty certain it would be the disk with C:.

There's probably something wrong with two SSDs, but not critically wrong (yet?). I can tell because your Windows still works. The way RAID0 operates makes the entire volume fail after one of the members fails. E.g if one of your SSDs was totally inoperable or missing, then your Windows wouldn't work.

If they are corrupted, how can I repair them?

There is this question in the official Intel support forum:

This morning, I was restarting my computer and suddenly find out one of my raid 0 hard disk status is displayed as error occurred. the ironic is, my PC is still running like there was no problem. is there anything I should do […]?

And the answer that helped:

If you installed the Intel Rapid Storage Technology (RST) driver in Windows you can use the RST application to check the status, reset errors, verify the raid, etc.

In general the answers agree that working with Intel Rapid Storage Technology software is the right way. I'm not familiar with the software so I cannot guide you in details.

It can happen the two SSDs are really faulty. Then you may want to disassemble the RAID and check them independently in an OS. Not "in the OS" because your current Windows will be inaccessible after you destroy the RAID. It may be they will turn out unreliable and you'd like to scrap them. In such case you will be able to create a new RAID0 (or RAID1 if you want) with the two remaining SSDs.

Or it can happen the software, upon closer inspection, will tell you the SSDs seem fine. I expect the error statuses to be cleared then.

Disk Manager sees only two disks. One of the two looks like the expected HDD, while the size of the other is weirdly equal to sum of the four SSDs of about 232 GB each.

One theory might be that they are on a software RAID which the BIOS does not understand, and the computer actually works fine.

This being Windows 10, it is possible that the four disks take part in one Storage Space, which the BIOS surely will not understand. Try to run the command Storage Spaces from the Start menu to see if it exists.

You could further check for disk errors by :

Not the answer you're looking for? Browse other questions tagged windows-10 hard-drive ssd or ask your own question.

0
Disk ID update after partition cloning from HDD to SSD
0
Issues installing new SSD in laptop
1
Dell Laptop + Samsung SSD 840 Evo: Disk Read Error Occured
0
How to tell if laptop supports SSD
3
Is relatime better than noatime on fstab for SSD?
1
Windows no longer starts on HDDs / SSDs cloned from McAfee encrypted HDDs / SSDs
2
Can the laptop hardware corrupt the HDD/SSD?
0
Cloned SSD, how can I clone it again?