How exactly is a subnet mask used when determining where to send a packet to?

If you have the subnet mask 255.255.255.0 and a class A IP address, the first octet specifies the network, the last is the individual host. So do the middle 2 octets specify the subnet? And this is useful because a router would know how to route it based on those two octets?

For example 121.123.124.101/24. Would this mean 123.124 is used by router to find the correct subnet? If this isn't correct, how exactly do subnet masks accomplishing subnetting? The actual point of subnetting is to reduce congestion and so that router tables don't have to be huge, right?

You have a bit of a misconception of which bits are used for identifying network and hosts.

All of the bits are used in one way or another.

In your specific example, a full octet for /24 would look like:

The point of subnetting isn't just to reduce congestion, but to minimize the waste of IP address blocks. In fact, the routing tables that are closer to the backbone of the internet have huge routing tables.

If you're having trouble finding an BGP table to look at on the site, here is one from Amazon-02, US

Here is a picture that helps visualize network and hosts bits from /17 to /30. 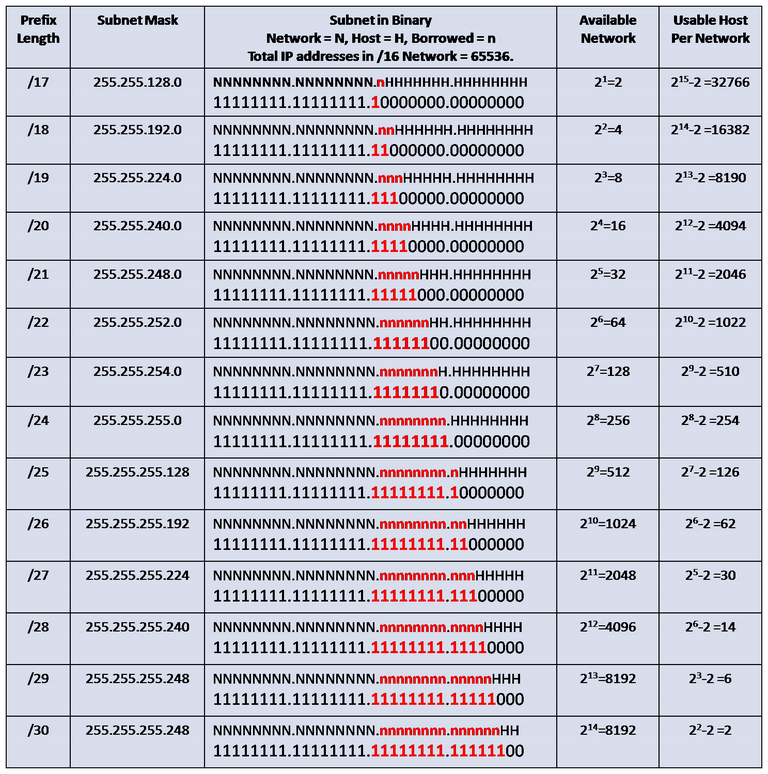 If you have the subnet mask 255.255.255.0 and a class A IP address, the first octet specifies the network, the last is the individual host. So do the middle 2 octets specify the subnet?

Yes, this was correct 30 years ago, when "class A" addresses were still part of the spec. However, they aren't anymore – the address is now fully described by its subnet mask.

That is, if you have the subnet mask 255.255.255.0, then the first 3 octets specify the network and the last octet specifies the host. That's it. The router doesn't care about which octets are "net" and which ones are "subnet".

No; the whole 121.123.124._ is used by the router to find the correct route. Routers don't think in terms of "subnet IDs" – they take the whole IP address and check it against a route with its netmask.

The actual point of subnetting is to reduce congestion and so that router tables don't have to be huge, right?

That indeed was the original point. When only classful networks existed before subnetting, organizations had to make a choice: if they got a class-B address assignment, they would need to connect everything to a single flat layer-2 network (possibly spanning several buildings or even several cities – linked together through layer-2 bridges); and if they wanted to do internal layer-3 routing, they would need to obtain many class-C's instead, and those class-C's would use up the very limited space in the core routers. Subnetting of course allowed the organization to internally have multiple networks while still publishing just one large route.

(Note that this is different from CIDR and classless allocation of addresses. Subnetting didn't solve the issue of needing to allocate a whole "class B" when an organization only needs maybe 2000 hosts. That's what CIDR deals with – it removes the concept of address classes entirely.)

Not the answer you're looking for? Browse other questions tagged networking router ip routing subnet or ask your own question.

1
Playing with default subnet mask: understanding the consequences
41
Why do we need subnet mask?
3
Why subnet mask for IP 10.0.1.4 is 255.255.255.0?
0
Subnet Masking vs Routing
2
How to create a subnet between two different networks
0
Subnetting on a Wireless Network
0
How to Physically Subnet a Network
0
Cannot reach any other device in the same subnet
4
What does /16,/24 mean with regards to ip addresses?