Conditional sum - if another cell is equal to BUY, add a number. If it is equal to SELL, subtract that number

As the title says - I have a table which calculates the average of some buys and the number of units bought.

647 represents the sum of those entries, without adding the positions sold. But if I sell something, I need to subtract the qty from the sum, not adding it is not enough.

How can I subtract the ones with sell?

The current formula for that cell is

but as I said, I need to subtract what was sold.

How should I edit my formula accordingly? 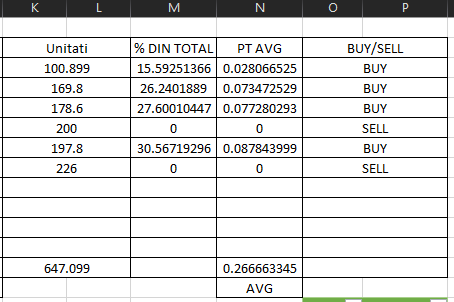 2
LibreOffice/Excel: SUM an adjacent cell if the value in the conditional cell is equal to N (SUMIF(?))
1
Excel 2007 VBA code to aggregate data based on conditions and calculate a weighted average
0
excel spreadsheet average with prioritization
0
Excel countif formula that will subtract from another number if cell contains certain values
0
Conditional formatting: cell value equal to multiple numbers
1
Excel: using a formula to only sum from above row until next blank cell?
0
how to subtract previous cell containing number in excel
1
Condition format color cells until sum equal to another cell
0
Excel multi layer if vlookup and formula
0
Add cells then subtract 1 if there is a date in another cell