There is this quite annoying bug, which is probably related to Windows 10, which makes mobile CPUs clock down to 0.39 GHz/399 MHz. Just searching on Google for "0.39 GHz". There are so many results with this exact problem.

My brand new Lenovo ThinkPad T15 has this problem as well with its i7-10510U CPU. However, it gets a bit weirder than that. Even when the CPU is running at 100% on all 4 cores/8 threads, Windows still manages to say "nope, this PC is definitely sleeping". Just take a look (although it's at 499 MHz and not 399 MHz here): 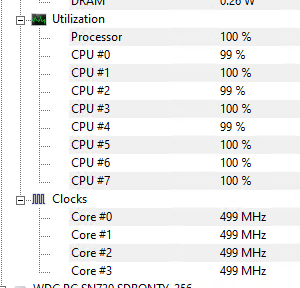 As you can see, all cores are maxed out, yet the CPU is still heavily underclocked. The temperature is fine - it rarely hits 90-95 degrees, where throttling would start to occur.

So I did a couple of things:

That seemed to help and I rarely get stuck at 0.39 GHz again.

HOWEVER, the laptop basically sits in a corner while I work, because I RDP into it from my desktop PC, which has more monitors, better keyboard, and so on. It works great. However, when the screen goes to sleep/turns black, it instantly sets the clock speed to 0.39 GHz again.

So now I have to either choose between having a CPU running at 0.39 GHz OR a CPU running at 4.3 GHz basically all the time, but the screen is turned on at the lock screen, so it might burn in after a while.

I'm tech savvy and I need some answers, so please, fire away. Why is the CPU "sleeping" at extremely low clock speeds, when the CPU hits 100% utilization? Why does Windows 10 or the laptop think it's okay to tell the CPU to "sleep"/preserve power, when the screen is turned off but I am actively using the PC via RDP? Is there a fix to this? So many questions and nobody has the answer, according to the 20+ sites I've went to.

EDIT: Nope, this did not fix my issue. It seems to be somewhat more stable when the screen is on, however, so I'm keeping it up if someone stumbles upon it.

So I think I managed to find a solution to my problem. Windows has introduced a feature called Modern Standby.

To check if Modern Standby is enabled, open CMD and write powercfg /a. If you see a Standby (S0 Low Power Idle) Network Connected option under available states, you have Modern Standby enabled.

After running one of the above commands and rebooting, it should disable the S0 state:

Once that is done and S0 is disabled, you should be able to edit your Power Options, so you can set the Processor power management: 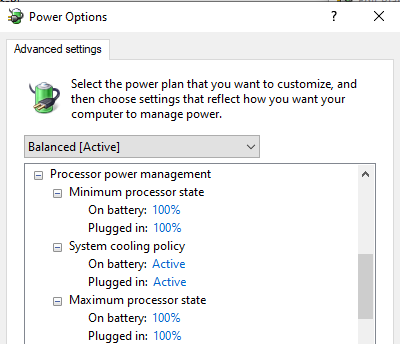 Recently had this issue with one of my Lenovo laptops. Lenovo investigated and said it was an issue with the "Modern Standby" feature.

The fix was to update to the latest Lenovo Inteligent Thermal Solution driver (version: 2.0.369.1) and to disabled "Modern Standby" with this Registry Key:

Let me know if that works for you :)

I did the following changes:

Disabling Modern Standby ("CsEnabled"=0 or "PlatformAoAcOverride"=0) did not help to avoid slow work when the screen is off, but had some other benefits (like all processes stop fully if you put your PC in sleep mode).

Neither helped increasing Minimum Processor state in Power Options, disabling Intel Speed Step and CPU Power management in BIOS (I didn't see any effect from these changes at all).

Download hardware monitor and check temperatures of your CPU.

I have had the exact same problem.

The fan is not functioning and the CPU is forced to downgrade the frequency because of that.

Why does my CPU utilization differ in Hardware Monitor and Task Manager?

If it's a Lenovo laptop T15 pc make sure you have BIOS 1.34 or newer since the fix for "(Fix) Sync TX solution to fix BIOS does not issue ATA FreezeLock / BlockSID during resuming from Modern Standby" have been introduced. This should fix the problems for the slow PC 0.39Ghz problem.

I have the same issue when I RDP, but with a Carbon X1 Gen 9. I did not have the registry key that Sendi mentioned after installing the Thermal Solution driver.

I have found that the CPU fan turns off when the Screen turns off, whether the laptop lid is open or closed. When the screen goes to sleep, you can wake up the system. If I set the screen turn off time to 1 min, the CPU fan will cut off after a minute. Tested with 3 and 5 as well, and the link is 100%

As a current workaround, under Power & Sleep, I have set the "When plugged in, turn off after" to Never.

If it can help, I solved this issue on my Thinkpad X270, which had the same issue, by booting the laptop plugged in. That "disabled" the bug and now, even if I'm not plugged in (at boot or in general), no problem anymore.

For me.I use AMD cpu.I removeed intel and set amd registry but still not help.

I use internet from my phone(Samsung S21) vie usb tethering connect with a type-c fast charge cable. I found my CPU speed lock to 0.39GHz when I dont use internet and random lock when network running. I guess it because the phone switch sending network data and power. And laptop doesn't how to handle small power from phone then lock cpu powerusage to minimal(watts).

So when I unplug my phone, I see the CPU doesn't lock anymore. Maybe you should check all power source that connect to your laptop.

Not the answer you're looking for? Browse other questions tagged windows-10 laptop cpu power-management or ask your own question.

6
GPU at >= 100% for Intel HD Graphics 3000
3
Lenovo laptop with Intel CPU remains at lowest clock
1
Weird behavior involving sleeping in Windows 10
3
Can we calculate the bandwidth for a CPU?
2
Older laptop stuck in low-power state on Windows boot