I have a samba server I use as a media center and I was wondering if there was an iPhone app to play music from it over wifi. It can be free or $$. 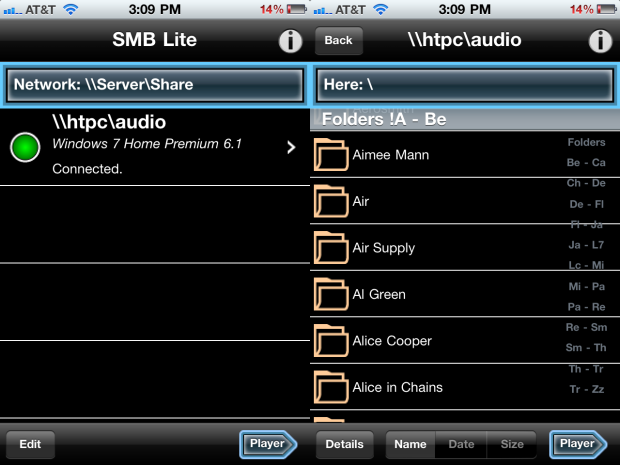 The Tuner Internet Radio app can play an HTTP mp3 music stream. When I bought it, it was the only app on the store that would let you add your own music stream to be played. There may now be other apps that allow this. This particular app supports AAC+, MP3, PLS, M3U streams, so it will play Icecast/Shoutcast streams.

It seems to be retailing at £3.49 at the moment, but it was a lot cheaper when I bought it.

I actually have an MPD server running on an Ubuntu system, and listen to it using the above app. I use another free app - MPoD (an MPD client) - to manage my server.

If you're on Windows, you can get the Tuner app to work with any server that can do streams.

Something to watch out for, if you're on linux and thinking of a similar setup: The MPD server included in the Ubuntu repository does not do mp3 streams (due to licensing issues). Neither can the MPD PPA. You only get Ogg streams with those versions, which will not work with the Tuner app. I had to compile the latest MPD server release from source with mp3 streaming support.

The only alternative with the MPD server shipped in the repos is to run an icecast2 server that'll take the MPD feed, and run it through an app like StreamTranscoder V3 to transcode to mp3, feed it back to the icecast2 server at a separate mount point, and point the Tuner app to this stream. It's not elegant, but that's what I had to do till I took the plunge and recompiled it from source.

Here is a comprehensive list of potential candidates that can be used to stream from a media server. However you will need to have some sort of media streaming server running for these applications to work.

Not the answer you're looking for? Browse other questions tagged iphone samba or ask your own question.

2
Is there a device to share mass storage over Wi-Fi to all platforms, even iOS?

1
Playing music from the computer on a iPhone Bluetooth Headset
1
Making my computer an iPhone music dock?
12
Disconnect from samba share
1
How can I stream music over firefly media server to my ipod or iphone?
1
Transfer iPhone to new computer: will I lose sensitive app data?
1
iphone hides all music and app storage in windows explorer
0
Samba multi file share
0
External IP address in samba share logs