I'm trying to connect a Cooler Master Hyper 212 to an Aura connector on an ASUS motherboard. I have the pinout for the motherboard, but not the fan/heatsink. I'm not that familiar with this connection, and expected better documentation since it's my understanding that plugging in the LEDs backwards will fry them. The connector is not keyed, and it's 12V, G, R, G, thereby giving me a 50% chance to choose correctly, and a 90% probability of choosing incorrectly. There's an arrow kind of on one side, but also kind of on pin 2.

The manual for the heatsink is cartoonishly bad, and does not have any specs, nor even any words. I looked at the product page, and the downloads available there, and could not figure out which way is which.

There is an arrow on one side of the connector, which I guess might mean that's the 12V side? The arrow is more on pin 2 than the outermost pin though, so I don't know if that's engineering laziness or what.

What is the (direction of the) pinout for the fan/heatsink's RGB connector? Which way do I plug it into my motherboard?

Since the fan is named, I looked it up, and there's a good picture of what I'm talking about. I don't have the pass through, I only have the female version (bottom connector in the pic). 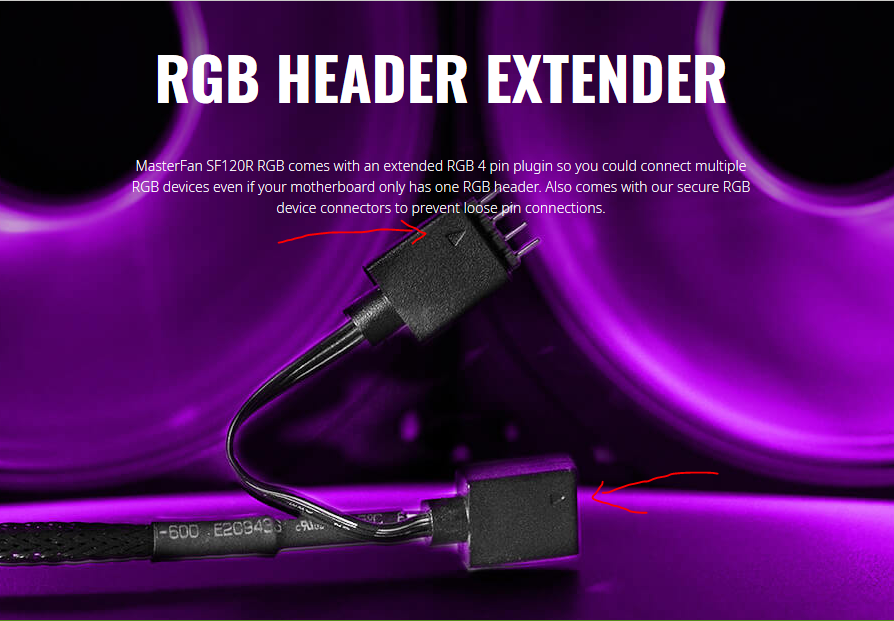 The arrow typically points to 12V. Check with the motherboard to see what pin is 12V. For more information, check this article. Specifically,

Most LED strips for the home use the connector, which typically has an arrow to indicate which wire is the 12V wire.

Not the answer you're looking for? Browse other questions tagged cpu-cooler asus rgb or ask your own question.