Can spots of inactive black pixels transmit to the other part of the screen?

I've found a very old laptop in my house (probably 14 years). I remember the screen was damaged because of pressure on the upper right corner. Something came between the lid and the base of the laptop and when the lid was closed, it continuously exerciced pressure on the screen, thus resulting in an inactive black spot. But the curious part is that there appeared 4 other, smaller spots, on the other part of the screen. I'm very sure that there hasn't been pressure on that part, though.

So, why did these 4 other spots appear? Are the pixels somehow in connection, thus causing the pixels in the other spots to stop working? And are this pixels dead or stuck? Important to note is the fact that you can actually see the groups of dead pixels even when the screen is turned off. I'm not necessarily wanting to repair the screen, I'm just curious about why this happened, even though I would like to try to repair it if there was a method.

As you can see, the're 5 black, inactive spots in total. The one in the right is where the pressure was accidentally applied. The other ones in the left are probably caused by the spot in the right. As you can see, I've already tried JScreenFix, but with no success. 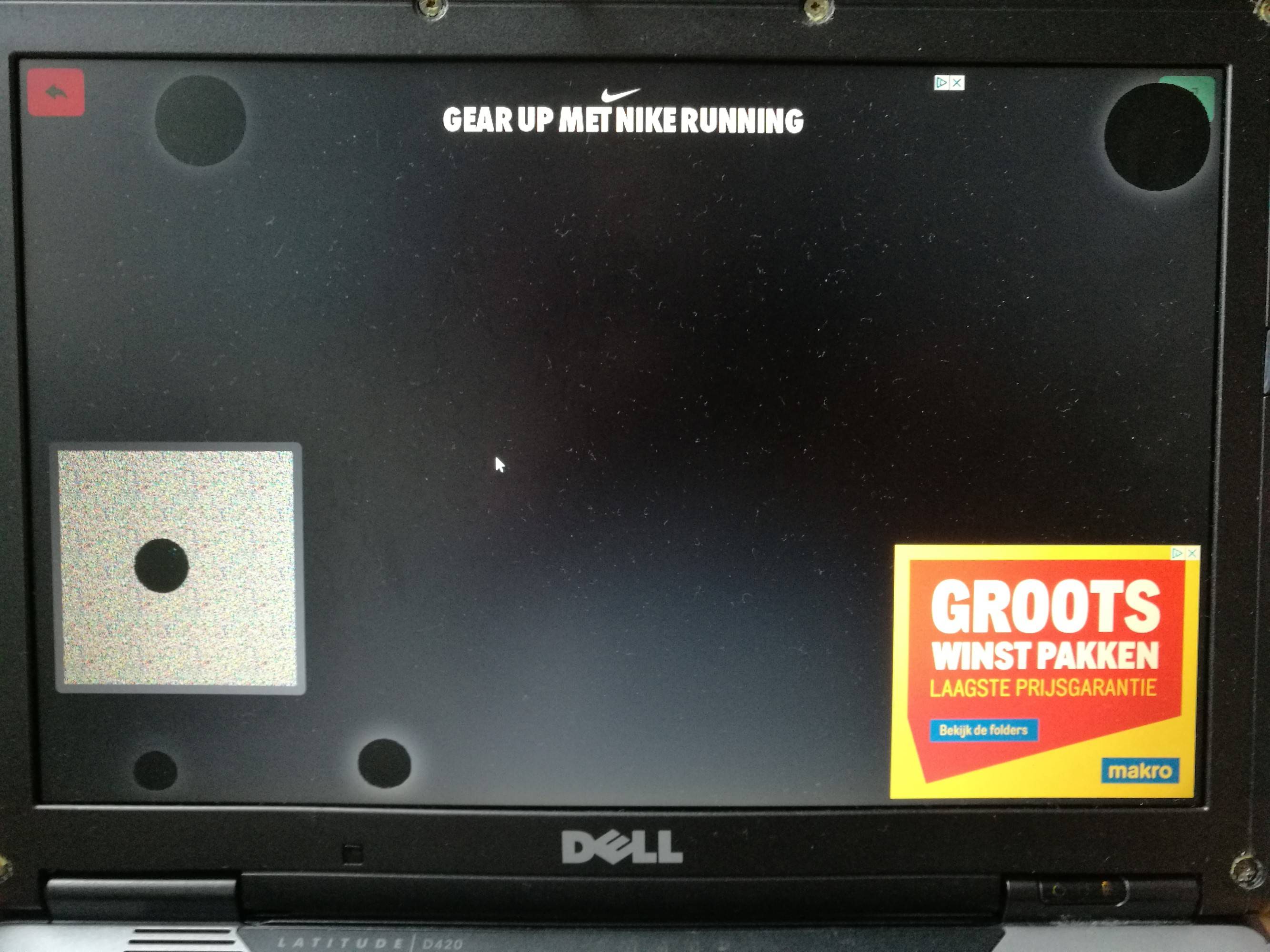 According to your description, and especially the fact that touching these round spots causes them to enlarge, the inescapable conclusion is that these are not dead pixels.

In any case, dead pixels do not reproduce themselves and are never arranged in geometric shapes.

This is screen damage that can only be fixed by replacing the screen.

I have never seen perfectly round screen damage. Dead pixels are usually a single pixel failed on the screen display itself. Also possible the wires to the screen can be damages, which causes full lines across the screen.

Such damage is the screen, which it output from the computer, and to answer the subject-line question - cannot be transmitted to another PC.

However, if the round dead spots are from the video output, then putting an external monitor (mirrored) would show the same black dots. That would be a quick way to determine screen/pc as the cause.

Pushing on the LCD screen would likely increase the size as the pressure causes warping of the screen causing data/light loss and thus expansion of the area. That is likely a secondary and unrelated to the actual issue.

From the image, and description, the actual laptop display is damaged and not repairable (though I am curious if external monitor will also show these spots, in which case it's likely the video card).

2
Is it possible that an LCD monitor gets pixels damaged in transit?
22
Green flickering pixels that move with black images
0
The laptop screen goes black after 6 seconds. What can I do?
3
can dead pixels magically heal themselves?
0
Green flickering dots that move on my laptop screen
3
White-Black dot on Laptop Display
14
Dead or stuck pixel? Weird pixel behavior
1
Is it a dead pixel or stuck pixel or pressure mark?
5
Why does the dead pixel on my monitor keep reviving and dying?
16
Why does the screen display dead pixels at 144 Hz, but not at 60 Hz?