Why does Notepad++ disable the HexEditor plugin?

Notepad++ is a great editor... The regular expression facility is stunted, but I can live with that. It is OK for most find/replace situations, and for the occasional others I'll just hop across to UltraEdit (Unicode) or TextPad (ASCII only).

However, I can't live without a hex editor on tap!

The Notepad++ HexEditor plugin seems to work fine... I use it frequently.

For some reason unknown to me, this plugin is forcibly disabled by Notepad++ whenever I upgrade to the latest version (of Notepad++), with a message something like ".. due to instability issues". HexEditor.dll gets moved into a "quarantine" subfolder: .\disabled.

This sounds a bit ominous. I have searched high and low, and I have found nothing which makes any reference to this mysterious "instability". The plugin is available on the Notepad++ plugins page (which lists third-party plugins, and is not, strictly speaking, a Notepad++ page), and there is no mention of instability.

What's going on? Does it randomly get it wrong and corrupt data? Does it crash Notepad++?

Can I trust this plugin?

The Hex Editor plugin was disabled for being unstable. This means that the plugin crashed Notepad++ in some situations. I encountered this problem myself when trying to save an edited file.

Earlier versions of Notepad++ don't have those problems with the plugin.

Just put it back in the plugins folder and it works fine.

Simply copying HexEditor.dll back from disabled to pluggins folder solves the problem. I haven't come across any crash.

I too like the HexEditor plugin. I rolled back Notepad++ to an older version to be able to work with this plugin. Now I checked the latest version on Notepad++ (v5.9.2 Unicode) with the latest HexEditor plugin (v.0.9.5 Unicode), and it works! The plugin is no longer disabled.

Some plugins are disabled by Notepad++ when you upgrade it :/. One of my favorite diff plugins got disabled a while back, and I have had to get a earlier version of Notepad++ to cope.

Why? I have discovered the reason why only recently, so I might as well share it here. Well, it's one of the reasons or one of the possible scenarios.

It's not a major issue the way I see it. But I can understand why the author of Notepad++ wants to move past this plugin and disable it each time Notepad++ is updated to a new version. The installer script moves the plugin to a subfolder named "disabled".

I had some NFO files on my computer recently, and when I right clicked on one of the files and chose to edit it in Notepad++ from the context menu, Notepad++ crashed. I thought that was weird. So I started Notepad++ and then dragged and dropped the file onto it and it worked. So it crashed each time I used the context menu to open the file, and it worked each time I dragged and dropped the file or used the open file dialog.

A few weeks later I got the prompt telling me that a new version of Notepad++ is available. So I downloaded and installed it. This is the first time I got the message telling me that the Hex Editor plugin was unstable and had to be moved to the "disabled" folder.

I had a thought that this might be what had been causing the crashes. As it turned out, it was! Right now I am using version 6.9.2 of Notepad++ and 0.9.5 of Hex Editor plugin on Windows 10 version 1511 (10586.494). As soon as I move the DLL file for the Hex Editor to the plugins folder to enable it, and then use the context menu to open a file, it crashes the program. If I shut it down, move the DLL file back to the disabled folder, then it does not crash when using the context menu. 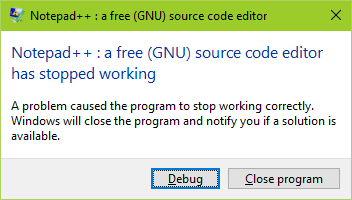 In case someone finds this interesting, here is what to do to replicate it.

Note that some older versions of Notepad++ will trigger the bug as well. I don't know what version introduced this issue. But if you use a too old version then the error will not appear.

I only found one issue, which is solvable, where Notepad++ fails to start correctly. Notepad++ can be seen in Task Manager and that it is consuming more and more memory. The reason for this behaviour is that the directory %APPDATA%\Notepad++\plugins\config is missing (e.g. for a newly created user).

Still it is a bug in Hex Editor with recent Notepad++ releases. But in my point of view nothing to call the Hex Editor plugin unstable.

There is only a problem the first time you launch the Hexeditor plugin.

The settings of Notepad++ and plugins are stored in your userprofile (%USERPROFILE%\Appdata\Roaming\Notepad++).

I found that when the files are created correctly then Notepad++ starts perfectly, but think it's a combination of files as I tried deleting one by one, but no result.

Not the answer you're looking for? Browse other questions tagged notepad++ plugins hex-editor or ask your own question.

36
How do I install the Notepad++ Hex-Editor plugin?
45
Notepad++ inserting special Unicode characters in UTF-8
38
Show hexadecimal/ASCII codes on Notepad++ 6.3
1
How to read/open a midi file?

4
notepad++ “autotext”-type plugin
27
“Go To File” Feature/Plugin for Notepad++
3
Why can't I install this Notepad++ plugin on my older computer?
269
Sorting lines in Notepad++ without the TextFX plugin
4
How do I automatically start the Python Indent plugin in Notepad++?
3
Notepad++ Plugin-manager fails update
36
How do I install the Notepad++ Hex-Editor plugin?
1
How to get ViSimulator plugin to work in Notepad++ 7.6.6?
0
Webedit plugin won't work on Notepad++ 7.6.6 (x86) / Windows 8.1
0
Customize Notepad++ XML Tools plugin shortcuts