Tips for getting latte or soda out of your keyboard?

For the first time in my entire life yesterday, I accidentally spilled some latte in my ergonomic keyboard.

The keys are starting to stick a bit now, and I was just wondering if there was some way to get those keys unstuck short of buying a new keyboard.

Last week I accidentally choked on some ironically named "Berry Blast Naked Juice" and spewed it all over my Microsoft Ergonomic 4000 keyboard at work. This time I had to clean the entire keyboard.

Ah, after watching a video from Russia on YouTube on how to clean the keyboard I tried nearly the same thing on my keyboard. I just took the keys off, and washed them in the sink.

The keyboard still works, but I had to wait an entire week for the thing to dry out enough for use. Although the keys looked dry to me when I initially reinstalled them in the keyboard, my belief is that there was still some water drops lodged in the dark/hollow cylinders that extend up into the key. These water droplets are probably what caused all of the extra j's I would get when pressing the backspace key when I first tried it out a week ago. After a week of letting it dry out, it seems to work again.

A small note about reinstalling the spacebar Also one more tip I would like to add, if you are re-installing the spacebar make sure that the connected side of the wire is attached to the actual spacebar key (it snaps right into place); Also, the disconnected part of the grey wire that lies bellow the space bar should fit between the two planks that jettison away from the back and forward keys/caplocks indicator lights.

Somewhat controversially, Throw it in a dishwasher!

Anecdotally: Worked great for me, but make sure you let it sit for a day or two to let it dry completely. Water doesn't hurt electronics, water hurts electronics that have power to them.

Otherwise, yes, pop the keys off and wash/clean those. It's a long process, but it does tend to work well.

My suggestion is similar to the one above only I suggest using isopropyl alcohol as your cleaning agent. Isopropyl alcohol has several advantages over soapy water. Soapy water is conductive and if you do not remove a sufficient amount of the residue, you will still have issues with the keyboard operation. Generally speaking it is easiest to just take the keyboard apart and separate the key assembly from the backing circuit board itself.

Once you have the circuit board removed from the key assembly, you now have access to all of the contacts the keys use. Use a paper towel or a Q-Tip to scrub the contacts for best results. The picture below shows the most common keyboard contact type. There is a conductive rubberized material that bridges the contacts and registers the key being pressed. At the end of this process the isopropyl alcohol will evaporate within a minute or two. Once this happens, you are clear to re-assemble and then 'keep on truckin'.... 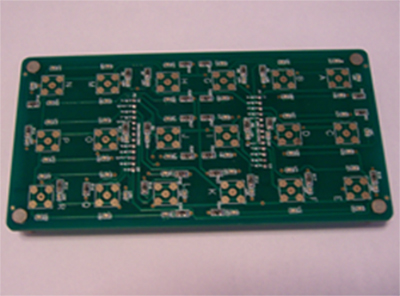 Unplug the KB immediately. Use a thin instrument to gently but firmly start popping keys from numeric keypad and work your way left. When you've removes all the keys, soak them and the keyboard in warm soapy water. After a good long soak, pull everything out of the water and allow to dry completely. (This is very important!) the keyboard itself will take quite some time to dry out and may need the assistance of a hair dryer of fan.

If you have access to a datacenter "machine room", with a big A/C unit pushing air into a raised floor plenum: After you clean the keyboard, open up the raised floor and put your keyboard right under the blowing air conditioner. It's a great source of high-volume dry air.

My choice was drying off the keyboard and continuing to press the keys as usual. It seems to work fine now. Go figure.

The above answers are pretty useless for a modern keyboard. The following worked perfectly with a Logitech MK270 keyboard.

Not the answer you're looking for? Browse other questions tagged keyboard cleaning ergonomics or ask your own question.

3
Clean soda out of a keyboard
2
I have accidentally spilt coffee on my desktop keyboard
2
Natural Ergonomic Keyboard 4000
1
Can I wash my Logitech K270 wireless keyboard?
0
Can I - and should I - rinse my mechanical keyboard after spillage?
50
Can I put keyboards in the dishwasher?
0
How to reassemble space bar (logitech mx keys | scissors switch)

2
Laptop keyboard with water damage
0
Spilled coke on my laptop keyboard, could the interface on the board be damaged?
1
F1 - F12 keys including F lock not working on my multimedia Microsoft ergonomic 4000 keyboard.
0
Can't enter password because Sticky Keys is enabled
1
Laptop keyboard isn't working after coffee spill
0
Can I clean corrosion inside my keyboard by washing or soaking?
10
What causes the number keys to stop working on Windows 10?