We're a bit late to the working-from-home party, but making an effort.

I got the following situation: 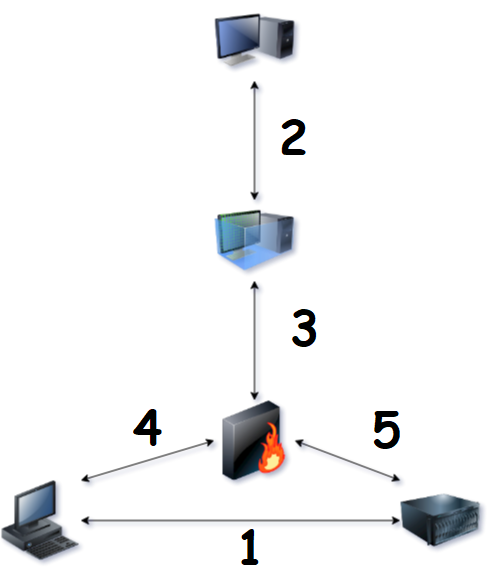 Ordinarily I connect from my workstation (bottom left) to the server (bottom right) by RDP. There are more servers involved, but all those are taken care of by the workstation and don't need user action.

Now, I spun up a virtual machine using Hyper-V on my personal computer (top). Log into the network using SSL VPN and RDP into both the workstation and the server. All working fine, except I now got a hotkey problem.

Ordinarily, I use Ctrl⊞ Win← and Ctrl⊞ Win→ to switch between virtual desktops, both on my home machine and my workstation. I'd like to keep doing that, even when I'm connecting from one to another. Naturally, when using RDP, you got a choice:

By default I get 3 options. Apply Windows key combinations:

I'd like to have a combination of both, while full-screen. The obvious choice would be using a 4th key as optional. Pressed? Send to remote. Not pressed? Local. Or switch out one of the buttons. However, there's no such option that I'm aware of.

I'm looking for a workaround. Note that it will not only have to counter the RDP, but the Hyper-V environment as well. Luckily, it appears to use a similar protocol. After all, these are the choices I get in the Hyper-V settings:

If all else fails, third-party software is an option.

The obvious choice would be using a 4th key as optional. Pressed? Send to remote. Not pressed? Local. Or switch out one of the buttons.

Sice the remote software will probably be listening to keys we can leave the default winctrl> and winctrl< alone. Instead if we can get some software to listen to keybinds and some software to change the desktop (without using keys) we can just define our own keybinds to change desktop.

Not the answer you're looking for? Browse other questions tagged windows-10 keyboard-shortcuts remote-desktop remote-access virtual-desktop or ask your own question.

0
Working with VNC / RDP and VPN together
4
Using RDP with multiple remote monitors
1
Remote Desktop sending Windows key shortcuts to both local machine and to remote desktop
0
Is Windows 10 HyperV console RDP and can it be changed?
1
Microsoft Remote Desktop Client for Chromebook Stopped Working Tuesday
2
Using a linux server to forward an RDP connection between LAN and VPN interface
6
How to keep an RDP session alive?