We have an older HDD (WD Black 500 GB) that was still in use for the data it had but then at some point, Windows wouldn't boot with the drive installed. I checked with a Linux installation and the main data partition had an unknown filesystem. I decided that the safest would be to use dd to create an image of this partition and then figure out a way to recover the filesystem. When I got to that, I started getting read errors occasionally. Then I found ddrescue and generated a mapfile from the ~11 GB of data I already copied over and proceeded from there.

I got some errors every few seconds but it was progressing fairly quickly (~50 MB/s when not erroring). But I noticed some strange sounds that I didn't think too much about.

I let it run for ~8 hours and then ~8 more the following day, then it started making worse sounds. I have 205 406 MB rescued according to ddrescue, while it was positioned around 300 000 MB so around 100 GB wasn't read properly.

At this point, the HDD stopped responding to basically anything. ddrescue went through all the remaining data right away, checking any SMART data or accessing the device in any way resulted in errors like this (this one is trying to put it on standby):

With only zeroes. Meanwhile, the HDD stopped making noise and was still spinning. I couldn't do anything besides shutting my computer down. After a while, I decided to try again, since I couldn't find much about this online. My system (Ubuntu) had a hard time booting, it displayed these errors but then eventually booted: 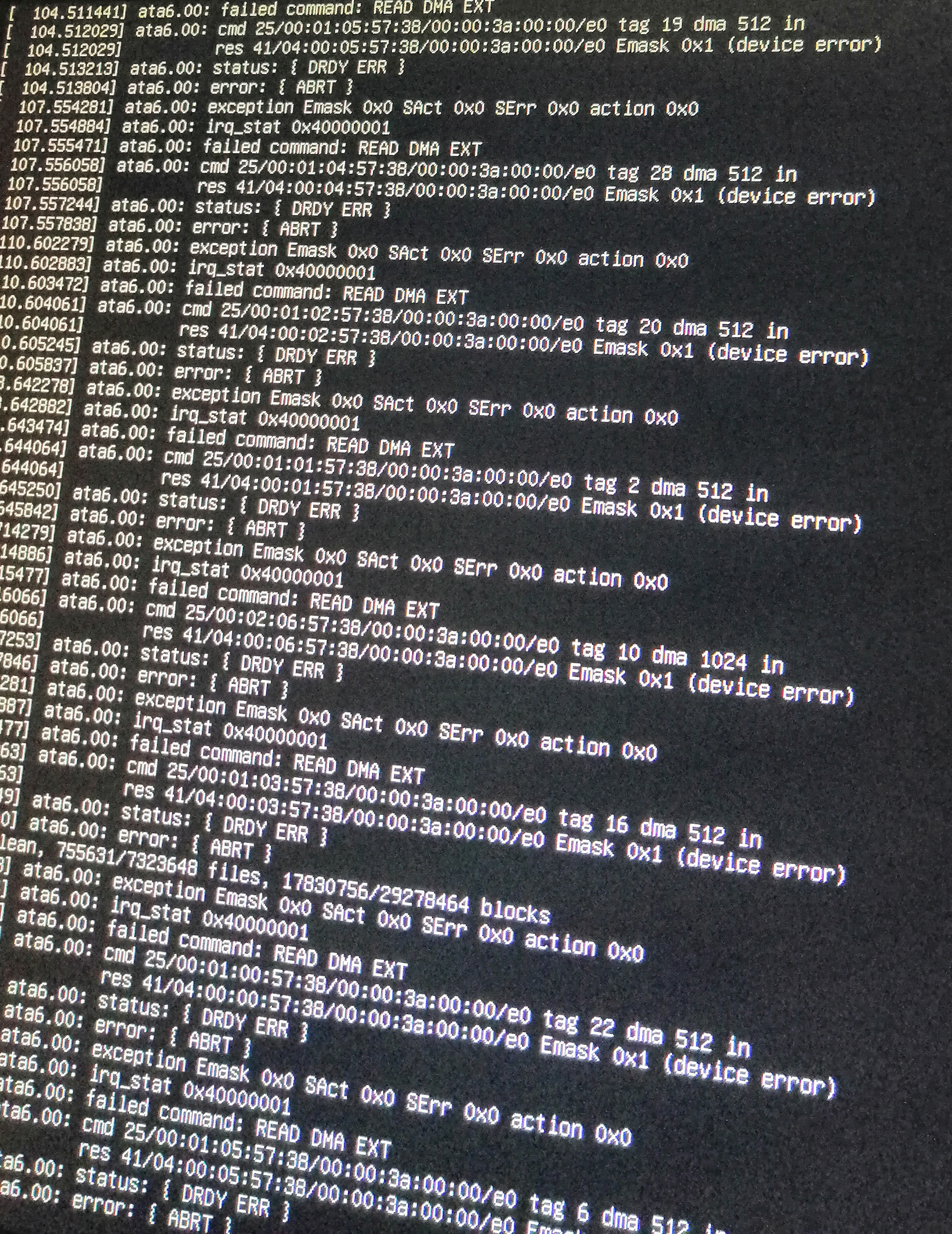 The GUI didn't show the device at first, but I was able to check the SMART status and it still reported that the disk is good (but there are too many read errors and similar). I tried ddrescue again, asking it to retry the areas it failed to read but basically, it wasn't able to read anything (maybe a few KBs) before the HDD locked up again after 20 minutes.

The HDD was making these sounds: before the lock-up, after the lock-up.

Is it still possible to recover data from this HDD? I know that doing this at home is risky but I don't have the money for professional data recovery. Should I be concerned about the noises? The reason I wasn't really concerned before is that it only made weird sounds occasionally. The hard drive wasn't dropped or anything to my knowledge so I didn't think the drive would have a failure that would cause further damage while reading it.

Your hard drive motor and/or other mechanical components are dead/dying.

The only option for recovery will require physically repairing the components that are failing, which requires very specialized equipment and is costly.

I know I'm a year late to this thread but my info might help the next person so here goes... I have sometimes had luck recovering a drive with a bad motor by putting the drive in a static bag and putting it in the freezer for 30-45 minutes and then immediately reconnecting and restarting ddrescue from its last successful rescue point (obviously you have to create a logfile for this to work). You might have to repeat this procedure several times to complete the rescue depending on the size of the drive, but it's still a lot better than sending it to a recovery lab. Hope this helps someone.

Not the answer you're looking for? Browse other questions tagged hard-drive data-recovery dd ddrescue or ask your own question.

0
Hard drive repeatedly making a series of sounds when PC is online
5
Cloning to a smaller hard drive with DDRescue
2
Recovering data from failing hard-drive using ddrescue
1
Internal hard drive is dying. Is this the right procedure to recover data (with ddrescue)?
7
GNU ddrescue imaging of failing hard drive is extremely slow
2
ddrescue fails to complete NTFS recovery
4
ddrescue stuck on scraping bad blocks... (forwards)
0
ddrescue using a much bigger intermediate drive. How to move back to a smaller drive?
0
Why is hard-drive causing clicking sounds only on one computer?