How do I check if a 2-track WAV file is “really” in stereo?

I have an audio file (WAV format to be specific). When I open it with an editor (e.g. audacity), I see two channels I suspect that the recording is actually mono rather than audio, i.e. I suspect the tracks are duplicate. What's an easy way to check whether they are...

I'm using Devuan GNU/Linux. A command-line solution would be nice, GUI is ok too.

This answer has now been expanded to cover three different way of achieving this, from the simplest; no code required, just listen, to more complex examples that could be used for bulk testing.

Flip the phase of one side & sum the outputs to mono.
If the result is silence, then it was mono; if not, it was stereo.
Even in stereo some parts will have been panned centre - vocals, bass, a lot of the drums etc, but you will hear an overwhelming difference between "some bits are missing " and "almost total silence".
If you just hear odd little tinny, crackly bits of the track, or just periodic fizzes, crackles & thumps, put this down to poor encoding, it's still 'mono' to all intents & purposes.

This relies on the physics of sound; in its simplest form if you add two identical waveforms together, the result will be twice as loud. If you invert one, then they will cancel each other out & always add up to 'zero'… silence. This principle is used for such as noise-cancelling headphones & background noise reduction in your phone's microphone.

Method
From the Audacity manual…

Effect > Invert
There is no effect dialog containing parameters for this effect; Invert operates directly on the selected audio. If the inversion takes an appreciable time, a progress dialog will appear.

Use the Audio Track Dropdown Menu and choose Split Stereo to Mono.
Select one channel but not the other, apply Invert and then Play. The vocals in each track will cancel each other out, leaving just the instrumentals.
Find out how different the stereo channels are: Use the same steps 1 and 2 above on any stereo track. If the audio is just as loud after the steps as before, the channels are very different. If the result is silence, the track is not really stereo but dual mono, where both left and right contain completely identical audio.

and hit OK. This will compute the difference between the two tracks.

"Probably", because it may happen the tracks were identical but opposite in phase. Then diff will increase the amplitude instead of bringing it to zero. The result will be significantly louder than the original. To rule this possibility out get back to the original tracks (Edit, Undo Nyquist Prompt) and sum instead of computing the diff:

Completely silent result means the tracks were identical but opposite in phase.

These simple tests will fail if the two tracks are similar but shifted in phase, or similar but with different volumes. A formula able to spot similarities also in such cases may exist but I'm not familiar with the Audacity Nyquist Prompt enough to help you further.

Not so simple method

Use the following code to create a .png graphics from your .wav. It runs ffmpeg and convert (from Imagemagick).

This will generate foo.wav.png and /path/to/bar.wav.png. By examining these files you will be able to tell if the input files were really in stereo.

What the script does:

I will analyze some example results down below. From it you can learn how to tell if stereo is genuine.

This is the original .wav of song 1 processed by spect: 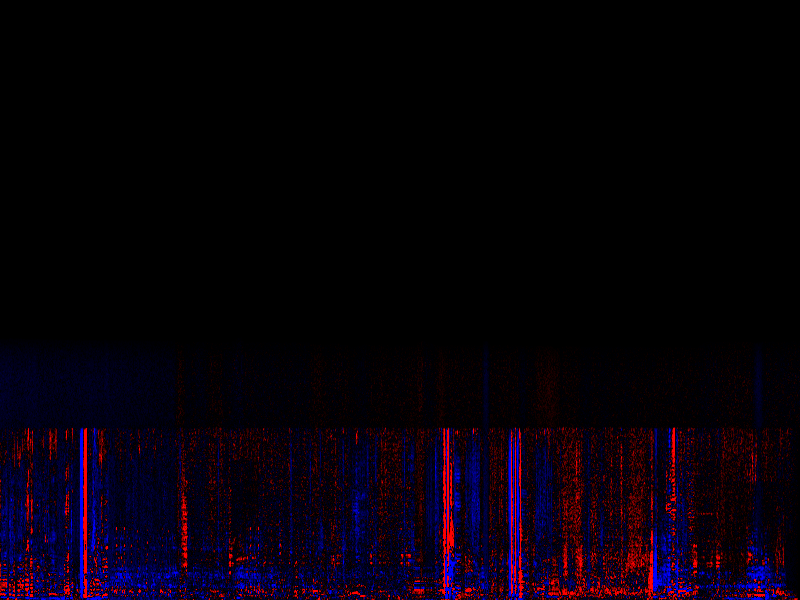 You can see there are columns of red, columns of blue. This is where (when) one of the channels dominates. This indicates it's genuine stereo.

The same song 1 with one channel opposite in phase looks virtually identical (click to enlarge):

The result is virtually all black. In theory it should be perfectly black. TBH I don't know where exactly the artifacts come from. The important thing is there is no detailed "structure" the original song had. The diff method from way above would generate silence for this one.

The same song 1 mixed to mono and presented as stereo (two identical channels), fake stereo, but with one channel opposite in phase:

This one would "fool" the diff method, you would need the sum method. spect works well regardless.

The same song 1 mixed to mono and presented as stereo, fake stereo, but with one channel reduced in volume by 10 dB:

You can see artifacts but again the picture looks very different than the one of the original song. Neither diff nor sum would generate silence.

The same song 1 mixed to mono and presented as stereo, fake stereo, but with one channel reduced in volume by 10 dB and opposite in phase:

It should now be clear opposite phase doesn't matter to spect. The rest of this answer treats this issue as solved.

For comparison: original song 1 with one channel reduced in volume by 10 dB:

Thanks to normalizing channels separately, the detailed "structure" the original song had is still visible.

The same song 1 with one channel completely silent:

The above results one next to the other. From left to right:

This is the original .wav of song 1 processed by spect:

This song does not separate channels as clearly as the first one, there are no columns of red or blue. Still some frequencies are more red than blue. The characteristics changes few times as the song goes. This indicates it's genuine stereo.

Different results one next to the other. From left to right:

Like for the song 1, you can tell genuine stereo by spotting detailed "structure".

This song is in fact monophonic. Mono signal had been recorded to (I suspect) a stereo tape. Ripped as stereo from the tape along with tape noise different for each channel.

There is no detailed "structure", just noise. This indicates the difference between the channels is basically just noise. The result form the diff method would not be silent, although for this exact .wav file the method would work because I could play the result and hear it's noise.

With unbalanced input the diff/sum method may work if you normalize first. Our spect does this automatically. For the record, this is how unbalanced song 3 processed by spect looks like:

An alternative, and in my opinion, easier way to calculate the difference between left and right track:

Click on the track, and then "Split Stereo Track" 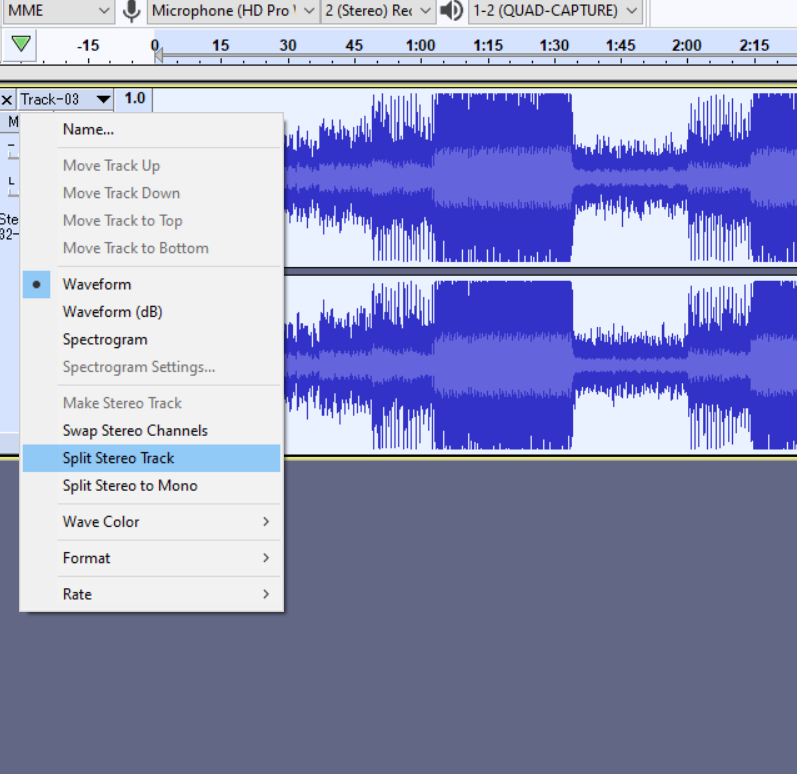 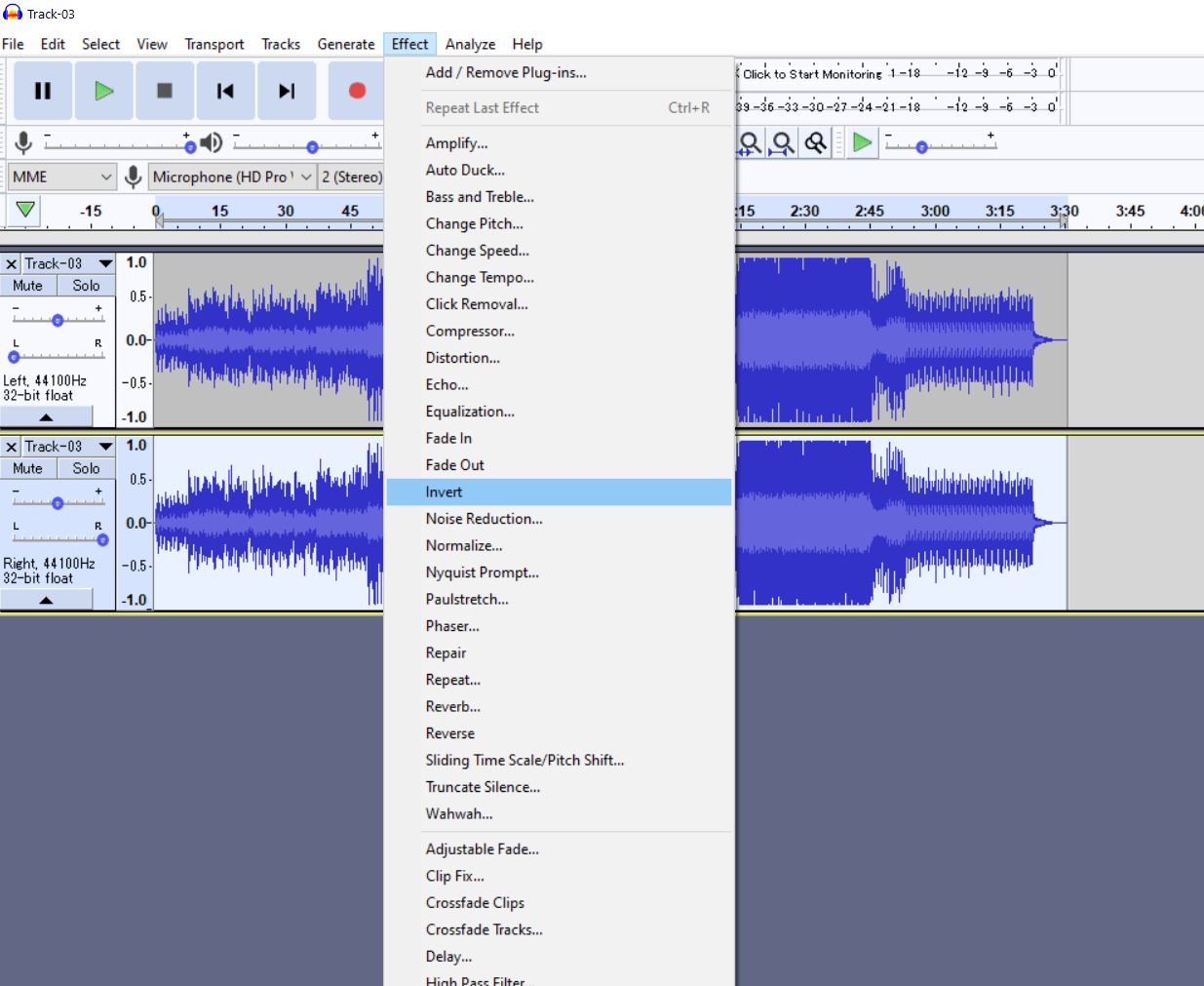 Set the panning of both tracks to center, select everything, and click on "Tracks/Mix/Mix and Render" 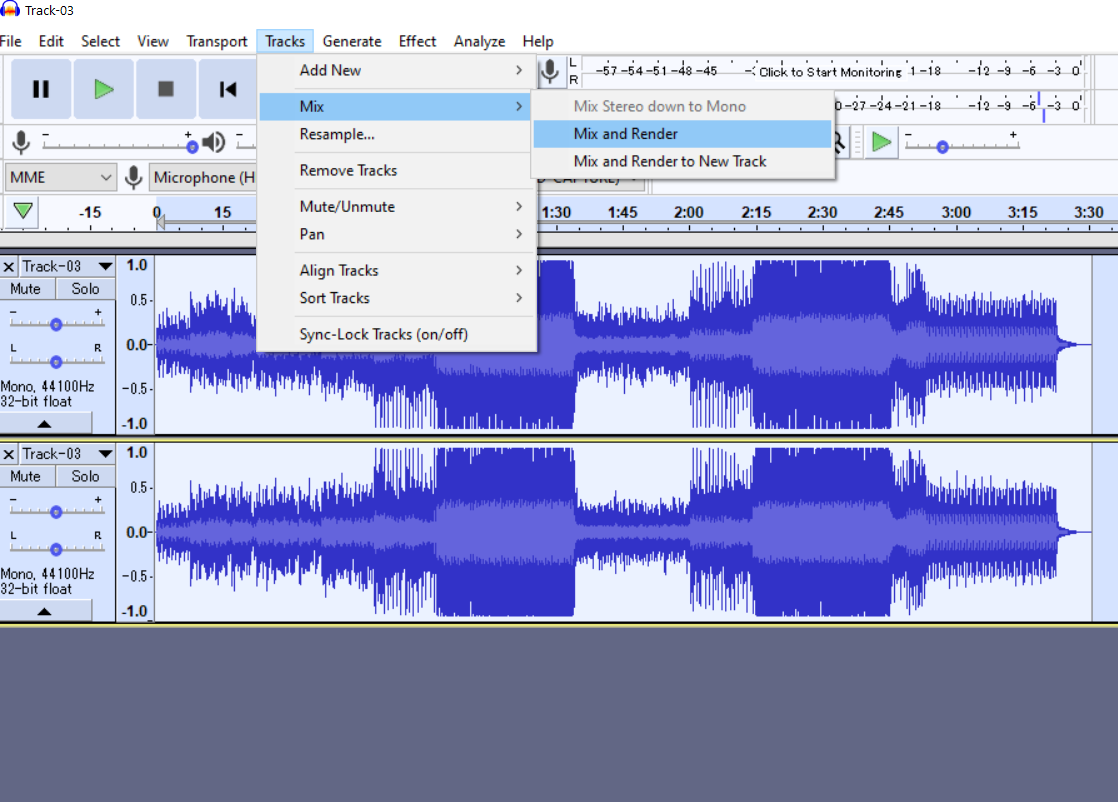 The result is the difference of both tracks. If it is zero, then it's the same track on the left and right sides. In this case, it's not. 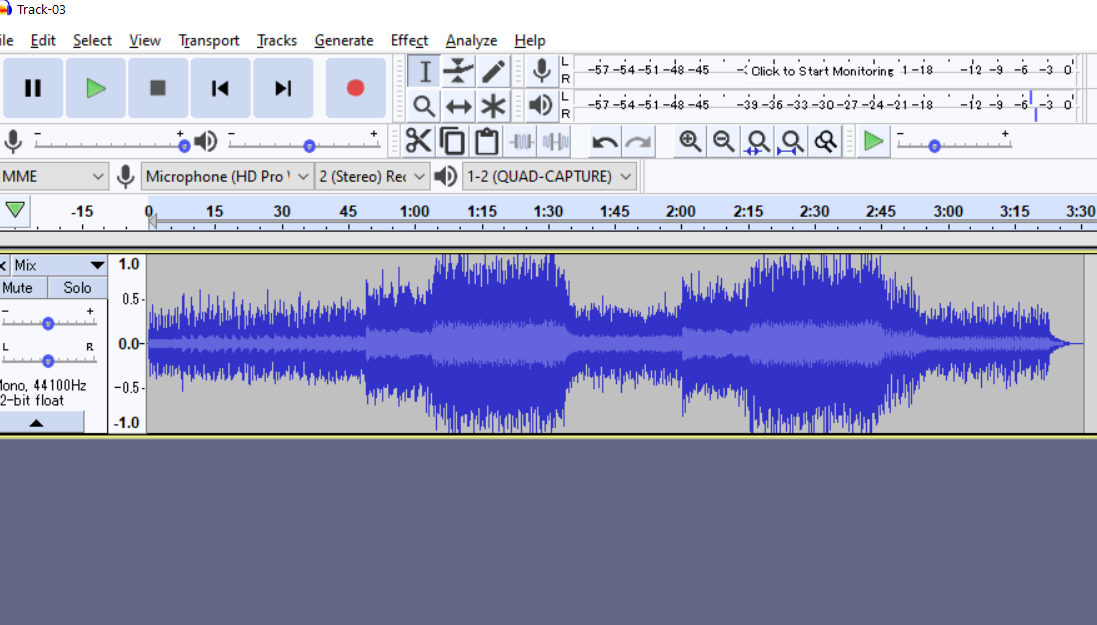 Here's a solution with sox, which makes more sense for this task than ffmpeg, in my opinion.

Sox has the oops effect, aka karaoke filter:

Out Of Phase Stereo effect. Mixes stereo to twin-mono where each mono channel contains the difference between the left and right stereo channels.

And if both channels are the same, the result should be all zero.
We can use sox's stat effect to check this.

We can chain both effects and have one simple command:

Which has this result for a "fake stereo" file, i.e. l/r channels are identical:

For a file which is almost stereo it looks like this:

In contrast, for a random song I picked:

You could go even further and compare the channels at bit level, by diffing the two channels:

I'm sure you could also condense this into one line with subshells.

You can achieve this with FFmpeg, using the pan filter to generate the delta between both audio channels, followed by the astats filter to print the overall RMS signal level.

The lower the displayed RMS level the smaller is the difference between both audio channels. If they are perfectly equal the displayed value will be "-inf".

If you have installed ffmpeg and have ffprobe, use this command:

This will give you an output where the important part is:

Note the channels=2 and channel_layout=stereo, which you can pass through grep to check.

A simpler command uses -show_entries to specify what you want, applies print formatting via -of to strip everything else as well and sets verbosity to 0 to not print the usual starting information:

This will return "2" for a typical stereo audio file.

For comparing the two channels, the post Comparing two supposedly identical tracks has this advice that uses the free Audacity:

Import them both into Audacity. Apply the "Invert" effect to one of the tracks. Select both tracks, then from the "Tracks menu > Mix and Render". If the tracks were identical, the result will be silence. To check that it is absolute silence, select the full (mix) track, and open the "Amplify" effect. If the Amplify effect says that the "New Peak Amplitude" is "-infinity", then the mix track is totally silent and the two imported files have identical audio.

The post contains much discussion that will interest you and some alternatives.

Slightly mathematical way: Calculate the Pearson correlation between left and right channels. If the result is very close to 1, the file is practically mono. If the result is -1, it is mono with one channel inverted.

How to do this with scipy and audio2numpy libraries:

For a few stereo song files I picked at random the correlation between channels was varying between 0.6 and 0.9. For the one file downmixed to mono, converted back to stereo and encoded to joint stereo mp3 the correlation was 1 to 10 digits precision, and with the mono downmix panned towards right channel and same encoding, 4 digits precision.

If played on a true stereo player, the sound from the left speaker will be different than the right speaker, giving the allusion of real acoustic sound, as we aurally perceive it.

Not the answer you're looking for? Browse other questions tagged linux audio duplicate wav stereo or ask your own question.

32
How to swap stereo channels in Ubuntu?
11
How do you make mono audio track playback in stereo in Ubuntu?
1
Soundflower audio from the iOS simulator is in mono, not stereo
4
Batch convert mono WAV to stereo verbatim
6
Read wav file header - possibly with audacity - on linux
3
How to verify whether a track is in mono or stereo?
1
How to patch sources in ffmpeg?