The error "Faulting module name: MSVCR120.dll" is generated when the app WeatherLink 6.0.5 crashes.

I reinstalled WeatherLink and assured all Windows updates and optional updates installed. No change.

I then wiped the PC and installed Windows again and then WeatherLink. System seemed to work fine for some time but has now started failing again. It normally happens overnight . AV software is Microsoft Defender. The PC is connected to a 1500VA UPS and APC software is installed on the PC to manage the UPS. No other applications have been installed.

The app can be restarted and sometimes runs for a few days.

There are sometimes issues writing to files in the C:\WeatherLink folder which is the default install location for the app. App reports unable to write. The application hangs at that point but does not close and generate an error. The event does not appear in any log. The logged on user has Full Control of the folder and files.

Software vendor support reports "This error is with the "Visual C++, in Visual Studio" that we rely on." Suggests contacting a computer technician.

The system has Visual C++ 2008,2013 and 2015 Redistributable installed and the installs have been repaired following the complete Windows reinstall.

Vendor support indicates they have no connection to error and that it is solely Visual C++.

I have seen a number of posts reporting that MSVCR120.dll is missing and creating issues but not the same issue.

Today the system threw error “Cannot write to C:\weatherlink\download.log” The app remained open and clearing the error popup allowed the screen to refresh with latest data. The user is local admin and has full control of the Weatherlink folder and all files.

No error listed in Event Log for that event.

I had uninstalled Visual C++ 2008 and 2015 as suggested by @RAMHOUND but while looking for anything related to the write error above, 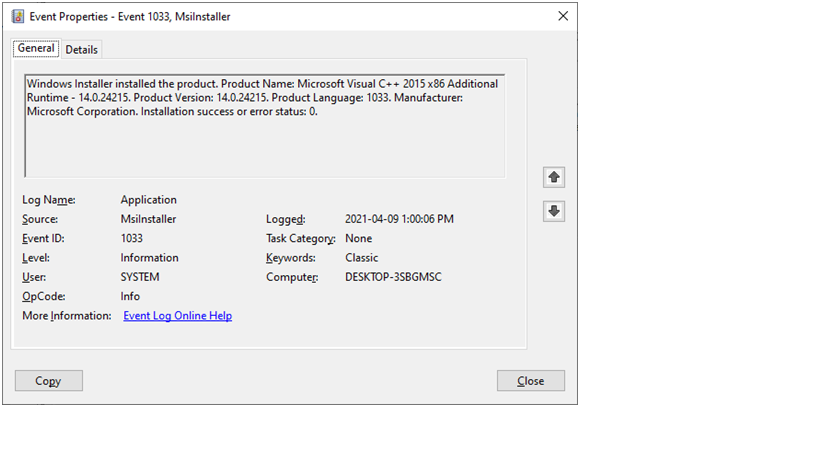 I find Visual C++ 2015 has installed today. Could this be related to Windows Defender update? Definitions updated earlier today.

Around the same time, there is activity in System Log around Skype but do not see any install change. Also Microsoft Edge reports a change on 9 Apr 2021.

A day later (11 Apr 2021) the same error is recorded and app has crashed. No change in installed apps.

Clean Win 10 install and latest updates. Tried to install latest version but needed earlier. Tried 6.0.3 which was most recent that was not an upgrade but it wants Visual C++ 2008. Stopped install. Copied entire folder from system before wipe and installed update assuming whatever upgrade needed would be there. That allowed install. Only Visual C++ 2013 is installed.

Will leave running for a few days before installing APC PowerChute Personal.

The Microsoft Error Lookup Tool might be used to check the description of this error: 0xc0000409. After loading the tool run the following command:

Considering that you tested this application for required version of the Visual C++ Redistributable package, including uninstalling versions not required by this application (Visual C++ 2008 and 2015), I would guess that this is a bug in the WeatherLink program.

For example, to be more precise, an application can use APIs that worked correctly in Windows 7/8, but in the Windows 10 environment, with certain parameters, will cause overrun of a stack-based buffer.