Why is there no tags option in properties?

I want to edit a file's tags so I can organize them. All the tutorials I could find say I can tag files like this: 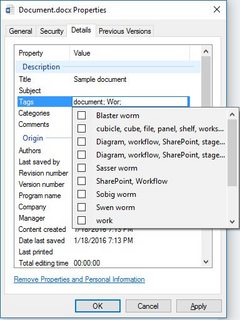 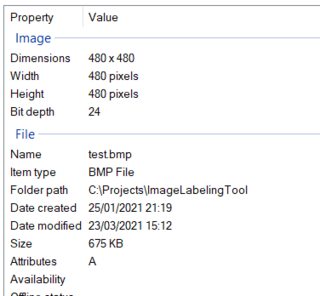 From what I understood, each file has some metadata where tag information can be added

No, that's not entirely correct.

However, the second option has been removed with Windows Vista. Now the only properties you can change are those defined by the file's format (and understood by the OS) – so Word DOCX files have their own specific fields, MP3 files have a different set of fields, and so on. You can attach "keyword tags" to DOCX but not to MP3.

So all of the the properties visible in the first screenshot (the "Description" and "Origin" sections, as well as the "Content" section that's off-screen) are actually provided by the property handler for Microsoft Office documents – none of them are generic Windows file metadata.

(I don't know whether you need to have Office installed for this, or whether the property handler comes with Windows, but I suspect the former.)

Your second screenshot shows a BMP image file, which does not support storing any metadata inside.

(A ".txt" file would be a better example, as its contents are literally just the text – there is no place for adding metadata without disturbing the contents even if one wanted to.)

If you looked at the "Details" tab of e.g. an MP3 or JPEG file, the available fields would be different. There are of course also many formats where Windows can only read the metadata but not edit it (e.g. EXE files), and many formats which Windows doesn't understand at all.

The reason you couldn't add tags to this image file, is that the image must be of a format that supports metadata.

The image you have chosen is of type BMP, which is an old format from a time that metadata was not invented yet. But you would get the same with GIF images.

To have the Tags property enabled, you must use a format that supports them. Some such formats are JPEG, TIFF and PNG.

Here is an example taken on my computer, where I have added the tags aa and bb to a JPEG image: 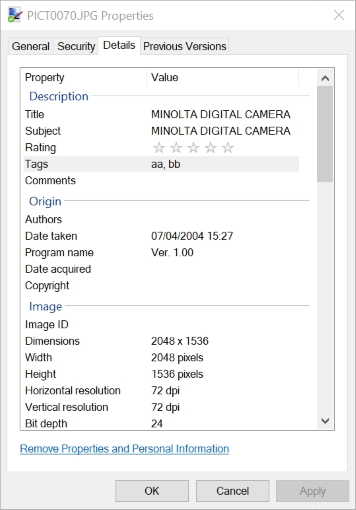 But if you are organizing an image collection that contains BMP images, then tags are not the right method to organize the collection.

For more details see these articles:

Not the answer you're looking for? Browse other questions tagged windows-10 windows-explorer file-management metadata tags or ask your own question.

9
How does windows tag a file?

3
Is there a way to tag MP3 the way you can do with Photos in Live Photo Gallery or Picazza?
2
How can I configure custom vim tags for my text file notes?
4
Can Windows 7 assign arbitrary tags to files?
0
How to add tags to mp3 files to make them searchable by tag and combinations of tags?
1
Windows 10 not reading some MP4 tags
0
Tags field not showing in Windows Explorer Details Pane when *null*
1
Windows Explorer: group by tags, but show subfolders first?