Deal with NBSP in terminal

How to deal with NBSP in a terminal?

The following are the behaviors of me pasting the exact same string (which consists of a leading NBSP) to terminals:

The NBSP comes from the document that I'm using, be it LibreOffice Writer or google doc etc. So I badly need to get this pasting NBSP working (as my 2nd case), because that's where I document my commands, i.e., I cannot change their behavior.

The "method 1" from this answer does not work for me: 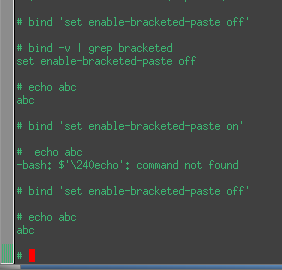 I'm guessing bind '"\302\240" is associating with pressing that key in the terminal, whereas I'm just pasting in. Just guessing.

All above commands are done in xterm, except the black-screen one, which is from urxvt (which gives 302 240 od -c - output).

Thanks a lot Kamil, for his persistent help. "It's midnight where I live", he said, but continued "I will check the question in several hours". It's the exact bind commands, and the bind 'set enable-bracketed-paste off' that is the last mile that I need.

Sorry Kamil, I should be more careful following what you suggested.

linux command-line bash terminal
Share
Improve this question
edited May 10 at 0:13
xpt
asked May 9 at 15:53

From this answer on Ask Ubuntu:

If markdown messes up the above

If markdown messes up the above, you have to put NBSP in quotes on the left side of colon as explained in the comment. This will map any occurrence of NBSP on input stream with a regular space.

Readline should understand \302\240. The following version won't be broken by markdown, you can copy it directly:

Note this solution can affect any program that uses Readline and there may be no easy way to disable the solution on demand for a program. In Bash you can disable it by running:

Separate instances of Bash can disable the binding independently.

If you want to affect Bash but not other programs that use Readline then put this in your ~/.bashrc:

Commands to disable and re-enable are exactly like in the previous solution.

This function will turn all NBSPs in the command line into regular spaces:

Bind it to some unused combination, e.g. to Ctrl+x,j:

Now you can sanitize the command line by typing Ctrl+x,j.

It may be useful to make Bash do this automatically upon Enter. Normally Enter sends Ctrl+m (verify by Ctrl+v,Enter, you should see ^M), but Ctrl+j should work as well. So let's make Enter send Ctrl+x,j to trigger our function and then Ctrl+j to execute the result:

Ctrl+j typed manually will still allow you to execute the command line without calling the function. Remember the function turns all NBSPs into regular spaces. If your code contains NBSPs that should survive then you need to fix other (i.e. unwanted) NBSPs manually and execute with Ctrl+j.

Not the answer you're looking for? Browse other questions tagged linux command-line bash terminal or ask your own question.

9
Terminal FTP client with progress bar
1
Repeat a terminal command
2
What's the deal with terminal colors?
0
Perform Terminal Commands Without Opening the Terminal - Linux
0
Up arrow in gnome terminal to review command line history ignores commands with leading whitespace. Is there a workaround?
3
Redirect input from code or terminal to running code or terminal?
2
How to update terminal title with the last command run in it?
0
Close terminal when closing app launched from terminal