I have a random freeze issue since I built my computer and never figured out what was wrong. I worked with it and restarted my computer every time I had the issue. I recently changed my motherboard & replaced my cpu fan with a watercooling, I hoped changing the motherboard would help, but it is now worse. Before, my computer was freezing randomly 1 or 2 times a week, most of the time when I was working on Ubuntu, but I also had the issue on Winwows (I have the two installed on 2 different SSD, I switch at boot : Ubuntu for work and Windows to play games).

Now, I cannot even use Ubuntu, it just freezes almost every time I try to use it. Sometimes I can do some things before, sometimes just starting firefox make it freeze. I didn't had the issue on windows since I changed the motherboard, I do use it less than Ubuntu but still.

Here are some details about the freeze:

I'm about to go crazy so if anyone has a lead I can work on, I would really appreciate it. My guess would be an issue in the CPU (since I changed the motherboard and the issue persist with either of the 2 ram), but I would like any other opinion on that and a way to be sure it's the source of the issue, because I can't just return it to my seller if it works fine...

This looks similar to something I'm seeing with a Ryzen 3700X on a Gigabyte B550 Motherboard. I'm using 5.12 and 5.13.x kernels, which has improved the support for the Radeon RX 5500M graphics card... My system usually freezes as you describe, often in a video conference with BigBlueButton - computer appears to be running, but accepts no input (keyboard or mouse) and the camera (USB) stop accepting images and dies. I suspect that part of the problem in my case is a motherboard issue with the USB hardware. The only vaguely relevant kernel messages related to the crash seem to be "usb1-3.1: Failed to query" messages around the time of the crash.

The solution that works for me is to increase CPU voltage by 0.025 volts in the BIOS: 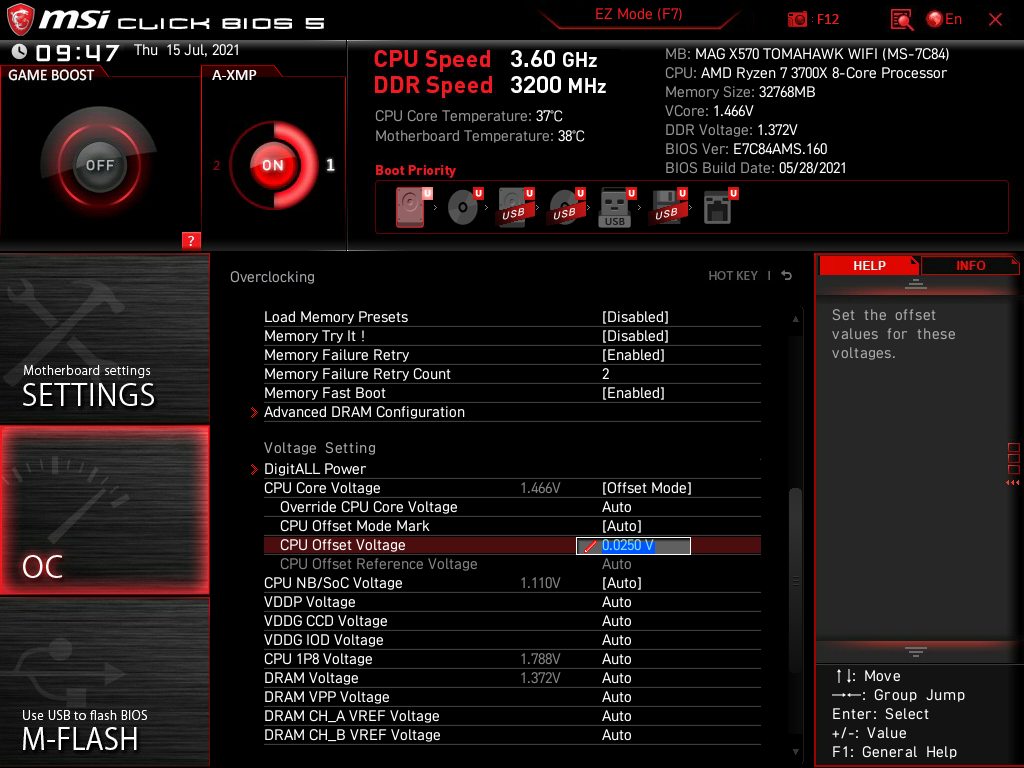 I have absolutely no freezes any more with this setting. As soon as this setting is removed (e.g. after BIOS update and resetting to default BIOS settings) the freezes are there again.

Hope this may help you.

0
Random Freezes on my Windows 10 PC
8
Linux UI frequently freezes for <1 second
0
New PC freeze just a few seconds after the Windows 10 installation program starts
0
How do I know if my SSD is compatible with my motherboard?
1
Windows freezes for good. Need help diagnosing
1
My computer turns on, then turns off immediately, without booting
0
Bizarre startup freezes / Windows 10