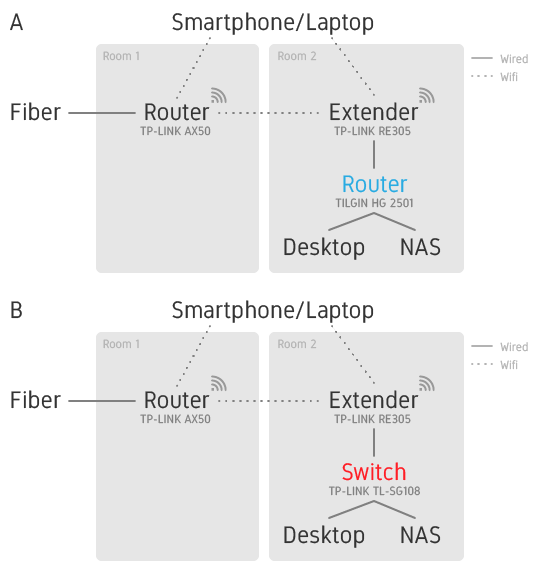 I have moved to an apartment where the network port is too far from my desktop so it's not possible to have wired connection. So, I setup a network using an extender. I initially setup A. I had an old router (Tilgin) lying around so I used it. But the network speed on Desktop/NAS was kinda slow.

Then I replaced the Tilgin router with a switch as shown in B. Now internet on the Desktop/NAS is weird. It's on and off a lot. It works a bit when I am browsing and then it goes off completely. When it works, the speed is the same as it used to be. But the connection is so intermittent and choppy. Every few secs, it's like there is no internet at all.

Internet on the smartphone/laptop from the first router (tp-link) and extender works fine in both cases A and B, so I assume it's something to do with the switch.

Any ideas on what might be wrong? Perhaps something conflicting? I am not even sure how to diagnose this and what metrics to look for. The desktop is running Windows.

EDIT: Long story short, the wifi extender can only handle one wired device.

What you are attempting to do will not work. The RE305 is an extender, not a bridge. As soon as more than one MAC address appears on its wired connection, it gives up, since it would have no way to know which device to route incoming packets to.

This a limitation of all client station devices that are not routers. You can't bridge a WiFi client to an Ethernet segment. This is the problem that WDS connections solve. (If you could, WDS wouldn't be needed. You could just connect to the AP as a regular client and bridge.)

See the User Guide and especially Chapter 6 : Monitoring. I believe that this manual relates to your switch.

You may login to the switch at http://192.168.0.1 (ensure that there is no IP conflict with another device on the network). The first stop is at Monitoring > Port Statistics. You will find there more information that may tell how the problem manifests itself, by bad packets or other problem.

In Monitoring > Cable Test you will be able to diagnose the connection status of the cable connected to the switch. This may also help to analyze where the problem is.

If no hint to the problem is found, you might consider trying another switch.

Not the answer you're looking for? Browse other questions tagged networking wireless-networking router home-networking switch or ask your own question.

2
Will two 1000BASE-T devices always run at gigabit speeds when connected to the same 1000BASE-T switch?
1
Plug Modem into switch, switch into Router
0
Why would changing ports on my Switch/Router change speeds
2
Creating an access point from a connection coming out of a network switch
0
How to configure shared Internet connection + switch + router setup?
0
Ethernet switch has not internet connection